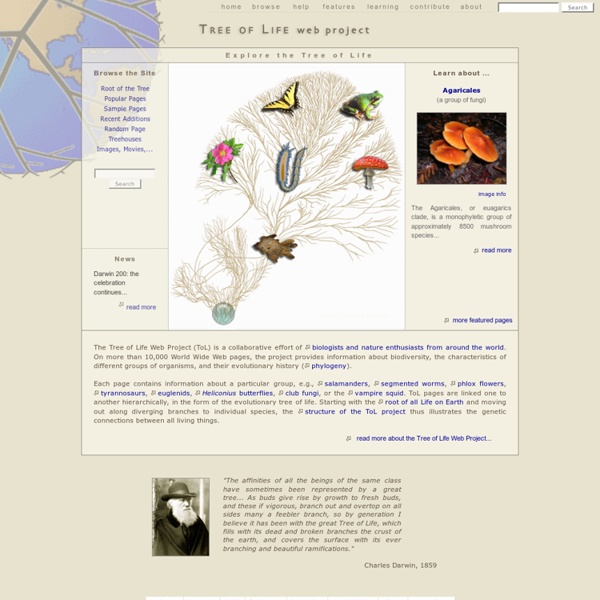 The Tree of Life Web Project (ToL) is a collaborative effort of biologists and nature enthusiasts from around the world. On more than 10,000 World Wide Web pages, the project provides information about biodiversity, the characteristics of different groups of organisms, and their evolutionary history (phylogeny). Each page contains information about a particular group, e.g., salamanders, segmented worms, phlox flowers, tyrannosaurs, euglenids, Heliconius butterflies, club fungi, or the vampire squid. ToL pages are linked one to another hierarchically, in the form of the evolutionary tree of life. Starting with the root of all Life on Earth and moving out along diverging branches to individual species, the structure of the ToL project thus illustrates the genetic connections between all living things.

Download Graphic Images from the Hillis/Bull Lab Return to "Download Files" Page You are welcome to download the following graphic image of the Tree of Life for non-commercial, educational purposes: Tree of Life (~3,000 species, based on rRNA sequences) (pdf, 368 KB) (see Science, 2003, 300:1692-1697) This file can be printed as a wall poster. Printing at least 54" wide is recommended. Classification Why do we classify things? * Classification provides scientists and students a way to sort and group organisms for easier study. * There are millions of organisms on the earth! (approximately 1.5 million have been already named)

European word translator: an interactive map showing "wall" in over 30 languages Enter one or two lower-case English words to see translations from Google Translate. Examples: banana the cat she runs Random words: closed speech Intuition and Neurology Intuition at once seems both the least understood, yet one of the most commonly experienced and powerful Ways of Knowing. Many of the most important decisions that we make (romantic partners, jobs, etc) are based on intuitive feelings / responses, yet this process of decision making is very little understood. At an experiential level Intuition feels as if it does not stand up to logic based ways of knowing. Volz and Zander (2009) define intuition as: “intuition is based on automatic processes that rely on knowledge structures acquired through different kinds of learning. This definition further posits that intuitions operate at least partially without a person’s awareness but nevertheless result in feelings, signals, or interpretations.

The Loom Your hands are, roughly speaking, 360 million years old. Before then, they were fins, which your fishy ancestors used to swim through oceans and rivers. Once those fins sprouted digits, they could propel your salamander-like ancestors across dry land. Fast forward 300 million years, and your hands had become fine-tuned for manipulations: your lemur-like ancestors used them to grab leaves and open up fruits. Within the past few million years, your hominin ancestors had fairly human hands, which they used to fashion tools for digging up tubers, butchering carcasses, and laying the groundwork for our global dominance today.

Scientists discover beautiful new insect species after stumbling upon photos on Flickr Adult green lacewing (Semachrysa jade sp. n.). Photo by Hock Ping Guek Scientists have discovered a previously unknown species of lacewing insect after stumbling upon a series of photos posted on Flickr®, according to a paper published in the journal ZooKeys. The species is named Semachrysa jade and lives in the rainforests of Malaysia. Shaun Winterton, a researcher with the California State Collection of Arthropods at the California Department of Food & Agriculture, first found evidence of the species when he randomly stumbled upon a set of photos posted by Hock Ping Guek, a Malaysian photographer. Winterton recognized the insect as a potentially new species, but needed to collect field specimen in order to formally describe it. About a year later, an individual was collected at the same site, enabling Winterton and Stephen J.

Animal Adaptations Being able to adapt is a matter of life or death. Animals who can't adapt - die! For animals, adaptation is the idea that animals have developed features that help them to survive and thrive where they live. Some adaptations are purely physical. Saskatoon Public Schools - The following videos are from ROVER on Gender and Stereotype MEDIA AND REALITY Series: MIXED MESSAGES: WOMEN IN MEDIA Looks at the portrayal of women in informational, entertainment and dramatic programming. It reviews issues of gender stereotyping, humour, gender equity and the commercial exploitation of stories of women as victims. This video examines gender and sexuality in teens. Girls discuss the media messages about culture and body. The Mind Blowing Truth About ‘Global Warming’ That Nobody Talks About By Steven Bancarz| We have all heard the hype about global warming. Global temperatures are going up, greenhouses gas emissions are destroying our atmosphere, there is more carbon dioxide in our atmosphere than ever before, the migration patterns of animals are changing, and the list goes on and on. This is all fine and well.

Myrmedrome - A real ant colony simulator MYRMEDROME is an ant colony simulator which tries to imitate the ants’ life as well as possible without introducing artificial effects. The simulation is based on the fundamental principle that each ant is not enough intelligent to understand it lives in a complex community, nor it is able to organize tasks in its colony. Therefore, each ant lives and works following some simple rules interacting (unaware of it) with the others by chemical signals. Home of free rubric tools: RCampus Welcome to iRubric iRubric is a comprehensive rubric development, assessment, and sharing tool. Designed from the ground up, iRubric supports a variety of applications in an easy-to-use package. Best of all, iRubric is free to individual faculty and students. iRubric School-Edition empowers schools with an easy-to-use system for monitoring student learning outcomes and aligning with standards.