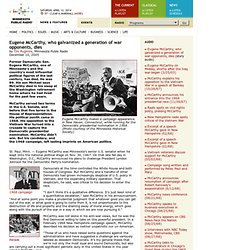 Eugene McCarthy, one of Minnesota's and the country's most influential political figures of the last century, has died. He was 89. His son Michael says McCarthy died in his sleep at the Washington retirement home where he had lived for the past few years. The Last Good Campaign. That night at the governor’s mansion Kennedy and Docking sat alone in the study, eating sandwiches, drinking beer, and smoking cigars. 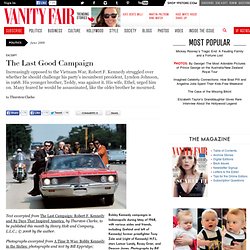 Docking’s late father, who had preceded him as governor, had been a minor Honorary Kennedy and an early J.F.K. supporter, rewarded for his loyalty with a position at the Export Import Bank. But despite this—and despite the fact that Docking had just witnessed a second demonstration of Bobby’s popularity, at a local indoor rally, where a mob of prominent Kansas Democrats had yanked the buttons off his coat and shirt (now being sewn back on in the next room by Rene Carpenter)—Kennedy did not press Docking to support him or keep the Kansas delegation uncommitted. Fred Dutton, an attorney who had worked in J.F.K.’s White House and had been drafted as Bobby’s de facto campaign manager, was socializing with Docking’s aides in another room.

The Kennedys and Rene Carpenter spent the night in rooms on the second floor of the governor’s mansion. “Bobby Is Groovy!” Theodore G. Bilbo. Of short stature (5 ft 2 in or 1.57 m), Bilbo wore flashy clothing, and was nicknamed "The Man" because he tended to refer to himself in the third person.[4] Bilbo was the author of Take Your Choice: Separation or Mongrelization.[5] Education and Family Background[edit] State Senate[edit] On November 5, 1907, Bilbo was elected to the Mississippi State Senate.[1] He served there from 1908 to 1912. 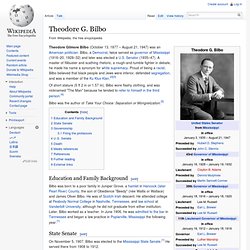 In 1909 he attended non-credit summer courses at the University of Michigan Law School during a period when the legislature was not in session.[6][7] During his subsequent campaign for lieutenant governor, Bilbo made a comment to Washington Dorsey Gibbs, a state senator from Yazoo City.[12] Gibbs was insulted, and during the ensuing skirmish broke his cane over Bilbo's head. Governorship[edit] Robert R. McCormick. Robert Rutherford "Colonel" McCormick (1880–1955) was a member of the McCormick family of Chicago who became owner and publisher of the Chicago Tribune newspaper. 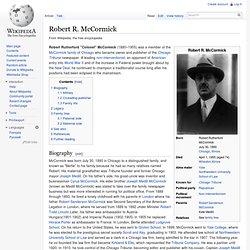 A leading non-interventionist, an opponent of American entry into World War II and of the increase in Federal power brought about by the New Deal, he continued to champion a traditionalist course long after his positions had been eclipsed in the mainstream. Biography[edit] McCormick was born July 30, 1880 in Chicago to a distinguished family, and known as "Bertie" to his family because he had so many relatives named Robert. His maternal grandfather was Tribune founder and former Chicago mayor Joseph Medill. William Randolph Hearst. William Randolph Hearst (/ˈhɜrst/;[1] April 29, 1863 – August 14, 1951) was an American newspaper publisher who built the nation’s largest newspaper chain and whose methods profoundly influenced American journalism.[2] Hearst entered the publishing business in 1887 after taking control of The San Francisco Examiner from his father. 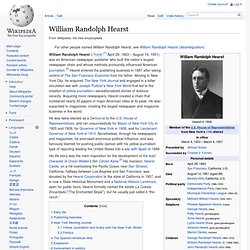 Moving to New York City, he acquired The New York Journal and engaged in a bitter circulation war with Joseph Pulitzer's New York World that led to the creation of yellow journalism—sensationalized stories of dubious veracity. Acquiring more newspapers, Hearst created a chain that numbered nearly 30 papers in major American cities at its peak. He later expanded to magazines, creating the largest newspaper and magazine business in the world. Early life[edit] Roy Cohn. Roy Marcus Cohn (/koʊn/; February 20, 1927 – August 2, 1986) was an American attorney who became famous during Senator Joseph McCarthy's investigations into Communist activity in the United States during the Second Red Scare. 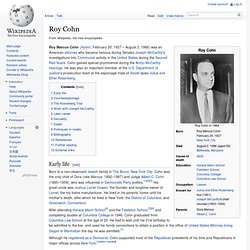 Cohn gained special prominence during the Army–McCarthy hearings. He was also an important member of the U.S. Department of Justice's prosecution team at the espionage trials of Soviet spies Julius and Ethel Rosenberg. Early life[edit] After attending Horace Mann School[4] and the Fieldston School,[5][6] and completing studies at Columbia College in 1946, Cohn graduated from Columbia Law School at the age of 20. Counterespionage[edit] Joseph McCarthy. The term McCarthyism, coined in 1950 in reference to McCarthy's practices, was soon applied to similar anti-communist activities. 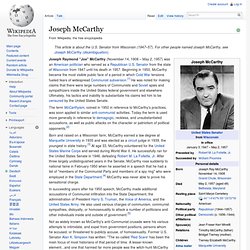 Today the term is used more generally in reference to demagogic, reckless, and unsubstantiated accusations, as well as public attacks on the character or patriotism of political opponents.[2] Born and raised on a Wisconsin farm, McCarthy earned a law degree at Marquette University in 1935 and was elected as a circuit judge in 1939, the youngest in state history.[3] At age 33, McCarthy volunteered for the United States Marine Corps and served during World War II. 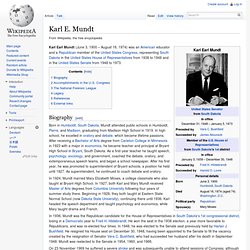 In high school, he excelled in oratory and debate, which became lifetime passions. After receiving a Bachelor of Arts degree from Carleton College in Minnesota in 1923 with a major in economics, he became teacher and principal at Bryant High School in Bryant, South Dakota. As a first-year teacher he taught speech, psychology, sociology, and government, coached the debate, oratory, and extemporaneous speech teams, and began a school newspaper. After his first year, he was promoted to superintendent of Bryant schools, a position he held until 1927. On 23 November 1969 he suffered a severe stroke and was subsequently unable to attend sessions of Congress, although he received extensive speech and physical therapy. 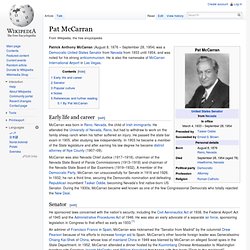 He attended the University of Nevada, Reno, but had to withdraw to work on the family sheep ranch when his father suffered an injury. Martin Dies, Jr. Gerald L K Smith. Gerald L.K. 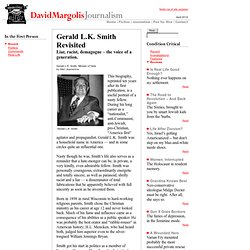 Smith Revisited. Father Coughlin: Political Views, Old Time Radio, Religion, and Life of the Radio Priest. Watergate - The Watergate Seven. The Watergate Seven was a group of men involved in the scandal who were advisors and aides to President Nixon. The members were indicted by a grand jury on March 1, 1974. President Richard M. Nixon was named by the jury as a co-conspirator, but was not indicted. This marked the first time in U.S. history for a president to be labeled by this term. Colson was the former White House counsel specializing in political affairs and was involved with the Committee to Re-elect the President. Picture Source: Mc-rall.de Ehrlichman was the former assistant to Nixon in charge of domestic affairs. Picture Source: Wikipedia Known as "The Brush" because of his characteristic flat top haircut, Haldeman was both Whitehouse Chief of Staff and a close friend to President Nixon.

Picture Source: The Washington Post Mardian served as both an aide to John N. George Jackson (Black Panther) George Lester Jackson (September 23, 1941 – August 21, 1971) was an African-American left-wing activist, Marxist, author, a member of the Black Panther Party, and co-founder of the Black Guerrilla Family while incarcerated.

Jackson achieved fame as one of the Soledad Brothers and was later shot to death by prison guards in San Quentin Prison during an alleged escape attempt. Born in Chicago, Illinois, Jackson was the second of Lester and Georgia Bea Jackson's five children. He spent time in the California Youth Authority Corrections facility in Paso Robles because of several juvenile convictions including armed robbery, assault, and burglary.[2] In 1961 he was convicted of armed robbery, for robbing $70 from a gas station at gunpoint and at age 18 was sentenced to serve one year to life in prison. [nb 1] Guerilla War in the United States, 1965-1970.