Teaching Writing. Open-ended Questions for AP Literature. Open-ended Questions for Advanced Placement English Literature and Composition, 1970-2013, to be used with Independent Reading Project Book Choice List IMPORTANT: ALL of the questions below, implicitly or explicitly, ask you to Show HOW what you’re discussing relates to the work’s over-all significance Avoid mere plot summary 2013.A bildungsroman, or coming-of-age novel, recounts the psychological or moral development of its protagonist from youth to maturity, when this character recognizes his or her place in the world. 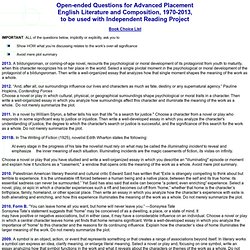 Select a single pivotal moment in the psychological or moral development of the protagonist of a bildungsroman. 2012. 2011.In a novel by William Styron, a father tells his son that life "is a search for justice. " 2011B.In The Writing of Fiction (1925), novelist Edith Wharton states the following: The Age of Innocence. The Age of Innocence is Edith Wharton's twelfth novel, initially serialized in four parts in the Pictorial Review magazine in 1920, and later released by D. 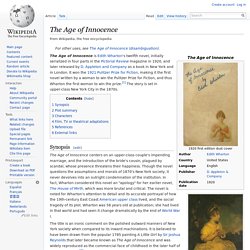 Appleton and Company as a book in New York and in London. It won the 1921 Pulitzer Prize for Fiction, making it the first novel written by a woman to win the Pulitzer Prize for Fiction, and thus Wharton the first woman to win the prize.[1] The story is set in upper-class New York City in the 1870s. Synopsis[edit] The Age of Innocence centers on an upper-class couple's impending marriage, and the introduction of the bride's cousin, plagued by scandal, whose presence threatens their happiness.

Though the novel questions the assumptions and morals of 1870's New York society, it never devolves into an outright condemnation of the institution. The title is an ironic comment on the polished outward manners of New York society when compared to its inward machinations. Plot summary[edit] Newland and May marry. Characters[edit] Major characters. Anchor Texts. Lady Windermere's Fan. Lady Windermere's Fan, A Play About a Good Woman is a four-act comedy by Oscar Wilde, first produced 22 February 1892 at the St James's Theatre in London. 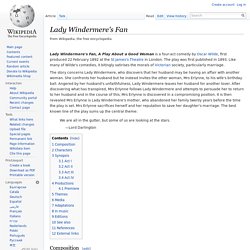 The play was first published in 1893. Like many of Wilde's comedies, it bitingly satirises the morals of Victorian society, particularly marriage. The story concerns Lady Windermere, who discovers that her husband may be having an affair with another woman. She confronts her husband but he instead invites the other woman, Mrs Erlynne, to his wife's birthday ball. Angered by her husband's unfaithfulness, Lady Windermere leaves her husband for another lover.

We are all in the gutter, but some of us are looking at the stars. Composition[edit] Alexander was a meticulous manager and he and Wilde began exhaustive revisions and rehearsals of the play. There exists an extant manuscript of the play and it is held in the William Andrews Clark Memorial Library at the University of California in Los Angeles.[9] Characters[edit] Synopsis[edit] Mrs. A Doll's House. A Doll's House (Norwegian: Et dukkehjem; also translated as A Doll House) is a three-act play in prose by Henrik Ibsen. 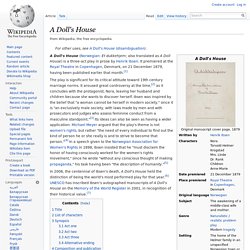 It premiered at the Royal Theatre in Copenhagen, Denmark, on 21 December 1879, having been published earlier that month.[1] The play is significant for its critical attitude toward 19th century marriage norms. It aroused great controversy at the time,[2] as it concludes with the protagonist, Nora, leaving her husband and children because she wants to discover herself. Ibsen was inspired by the belief that "a woman cannot be herself in modern society," since it is "an exclusively male society, with laws made by men and with prosecutors and judges who assess feminine conduct from a masculine standpoint.

Title[edit] List of characters[edit] Synopsis[edit] Act one[edit] The play opens at Christmas time as Nora Helmer enters her home carrying a number of packages. Krogstad, a lower-level employee at Torvald's bank arrives and goes into the study. Long Day's Journey into Night. Long Day's Journey into Night is a drama in four acts written by American playwright Eugene O'Neill in 1941–42 but only published in 1956. 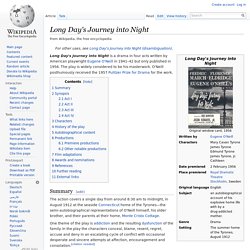 The play is widely considered to be his masterwork. O'Neill posthumously received the 1957 Pulitzer Prize for Drama for the work. Summary[edit] The action covers a single day from around 8:30 am to midnight, in August 1912 at the seaside Connecticut home of the Tyrones—the semi-autobiographical representations of O'Neill himself, his older brother, and their parents at their home, Monte Cristo Cottage.