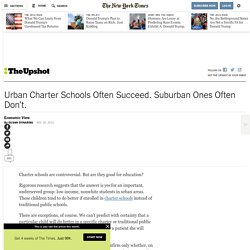 But are they good for education? Rigorous research suggests that the answer is yes for an important, underserved group: low-income, nonwhite students in urban areas. These children tend to do better if enrolled in instead of traditional public schools. There are exceptions, of course. We can’t predict with certainty that a particular child will do better in a specific charter or traditional public school. Social scientists, like medical researchers, can confirm only whether, on average, a given treatment is beneficial for a given population.

Charter schools are publicly funded but not bound by many of the rules that constrain traditional public schools. Charters, for example, can easily try new curriculums or teaching strategies, or choose to have a longer school day. 3 Ways to Help Rural Schools. Urban schools command the vast majority of attention from policymakers and school reformers. 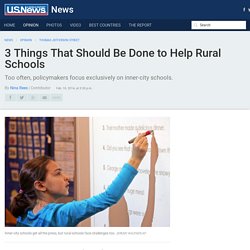 With consistently poor performance and cross-cutting problems such as poverty, lack of health care access and hunger, inner-city schools have been the blinking light on the dashboard of American education for more than a generation. But it’s not only city schools that need our attention and help. JennieSR. MLA Formatting and Style Guide. Summary: MLA (Modern Language Association) style is most commonly used to write papers and cite sources within the liberal arts and humanities. 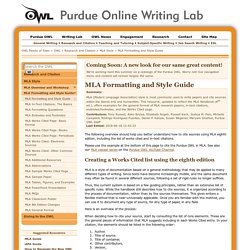 This resource, updated to reflect the MLA Handbook for Writers of Research Papers (7th ed.) and the MLA Style Manual and Guide to Scholarly Publishing (3rd ed.), offers examples for the general format of MLA research papers, in-text citations, endnotes/footnotes, and the Works Cited page. Note: MLA has recently released the eighth edition of its handbook. See our page on the major changes in the new edition. We will replace our current MLA resources with resources on the eighth edition in early June 2016. Title I - Improving The Academic Achievement Of The Disadvantaged.

Title I of the Elementary and Secondary Education Act of 1965 (20 U.S.C. 6301 et seq.) is amended to read as follows: TITLE I--IMPROVING THE ACADEMIC ACHIEVEMENT OF THE DISADVANTAGED. 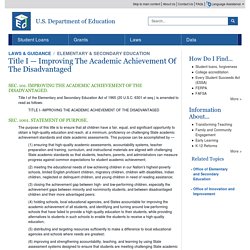 - The Future of Children - How Can Urban School Districts Improve the Quality of Their Teachers? 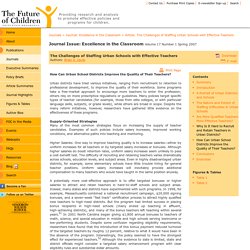 Urban districts have tried various initiatives, ranging from recruitment to retention to professional development, to improve the quality of their workforce. Some programs take a free-market approach to encourage more teachers to enter the profession; others rely on more prescriptive regulations or guidelines. Many policies target specific types of teacher candidates (for example, those from elite colleges, or with particular language skills, subjects, or grade levels), while others are broad in scope. For Public Schools, Segregation Then, Segregation Since: Education and the Unfinished March. Fifty years ago last January, George C. 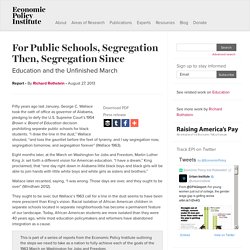 Wallace took the oath of office as governor of Alabama, pledging to defy the U.S. Supreme Court’s 1954 Brown v. Board of Education decision prohibiting separate public schools for black students. “I draw the line in the dust,” Wallace shouted, “and toss the gauntlet before the feet of tyranny, and I say segregation now, segregation tomorrow, and segregation forever” (Wallace 1963).

Eight months later, at the March on Washington for Jobs and Freedom, Martin Luther King Jr. set forth a different vision for American education. Wallace later recanted, saying, “I was wrong. They ought to be over, but Wallace’s 1963 call for a line in the dust seems to have been more prescient than King’s vision. On Teacher Pay, City vs. Suburbs Isn't That Simple.

For the last five months, the union representing New York City teachers has been peppering newspapers, radio and prime-time television with advertisements that make a powerful argument for raising salaries: city teachers earn a whopping 25 percent less than those in the surrounding suburbs, the ads say. 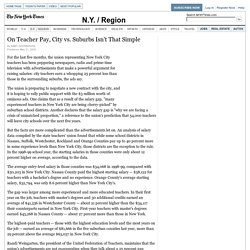 The union is preparing to negotiate a new contract with the city, and it is hoping to rally public support with the $3 million worth of ominous ads. One claims that as a result of the salary gap, ''many experienced teachers in New York City are being cherry-picked'' by suburban school districts. Another declares that the salary gap is ''why we are facing a crisis of unmatched proportion,'' a reference to the union's prediction that 54,000 teachers will leave city schools over the next five years. Who are Urban Students? Cultural and Linguistic Diversity America's two largest cities, New York City and Los Angeles, highlight the diversity of urban populations relative to the nation as a whole. 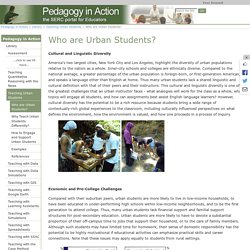 Inner-city schools and colleges are ethnically diverse. Disparaties. Sociology Differences in Urban and Suburban Schools. The disparities between urban and suburban schools are abundant. 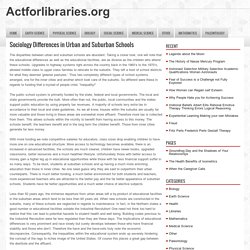 Taking a closer look, one will note that the educational differences as well as the educational facilities, are as diverse as the children who attend these schools. Upgrades to highway systems right across the country back in the 1960’s to the 1970’s, allowed middle class to upper class families to relocate to the suburbs. They left a host of school districts for what they deemed ‘greener pastures.’  - The Future of Children - A Portrait of Urban Districts and Schools What is an urban school? 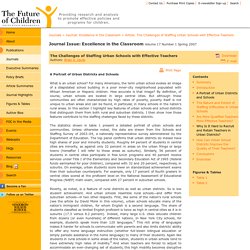 For many Americans, the term urban school evokes an image of a dilapidated school building in a poor inner-city neighborhood populated with African American or Hispanic children. How accurate is that image? Sizing Up Test Scores. Rural Education. Published: August 9, 2004 Updated June 15, 2011. d03234. Large Urban-Suburban Gap Seen in Graduation Rates. It is no surprise that more students drop out of high school in big cities than elsewhere. Minority Student Recruitment, Retention and Career Transition Practices. References Introduction In the aftermath of anti-affirmative action legislation, with the recognition of the value that diversity brings to higher education and the workforce, and with the looming shortage of workers to meet labor demands, institutions of higher learning, private and public corporations and organizations, and professional associations have a renewed interest in the best recruitment and retention practices and programs to prepare ethnically and racially diverse students to enter professional careers.

As pointed out by Lee (1991) in a comprehensive review of the recruitment and retention literature, these issues are not new.