Whose Neighborhood Is It? 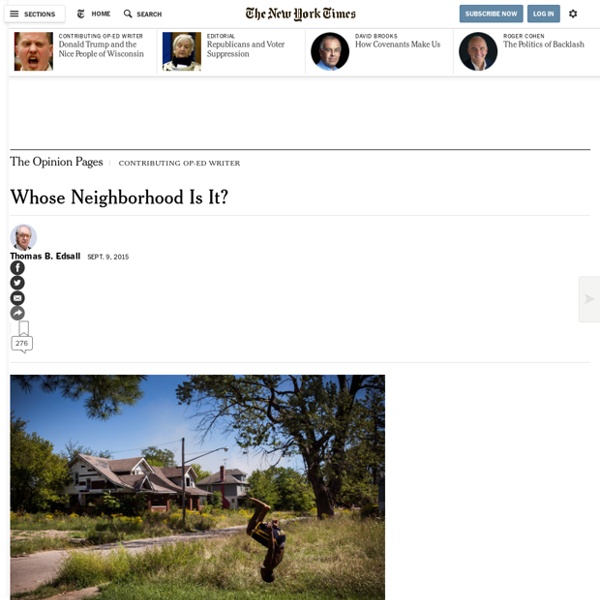 Photo On June 25, 1974, suburban residents of Detroit won their four-year battle to overturn court-ordered busing of black city students across county lines into their schools. In a key 5-4 Supreme Court decision, Milliken v. Bradley, Chief Justice Warren Burger declared that 41 white suburban governments had not committed “significant violations” of the Constitution. Burger wrote: No single tradition in public education is more deeply rooted than local control over the operation of public schools; local autonomy has long been thought essential both to the maintenance of community concern and support for public schools and to quality of the educational process. The victory in Milliken was based on the assumption that African-Americans would be bused in, not that they would be living next door. Southfield, Mich., for example, which had been 0.7 percent black in 1970, by 2010 had become 70.3 percent black, and its schools nearly 95 percent black. According to Schelling, Zhang writes,

A Dream Still Deferred AT first glance, the numbers released by the Census Bureau last week showing a precipitous drop in Detroit’s population — 25 percent over the last decade — seem to bear a silver lining: most of those leaving the city are blacks headed to the suburbs, once the refuge of mid-century white flight. But a closer analysis of the data suggests that the story of housing discrimination that has dominated American urban life since the early 20th century is far from over. In the Detroit metropolitan area, blacks are moving into so-called secondhand suburbs: established communities with deteriorating housing stock that are falling out of favor with younger white homebuyers. If historical trends hold, these suburbs will likely shift from white to black — and soon look much like Detroit itself, with resegregated schools, dwindling tax bases and decaying public services.

Fires burn across Detroit as high winds knock down power lines By the CNN Wire Staff September 8, 2010 7:34 a.m. EDT The Abandoned City of Detroit - Photography: Zach Fein The study of abandonment must convene upon Detroit at one point or another. No other city in the United States has undergone such a dramatic level of population decline, abandonment, and urban decay over the past few decades. As many of the posts under the research section of this site convey, industry in America has toppled and left behind an amazing amount of abandoned and decaying architecture. Detroit, the nation's most industrious city, reflects this in a unique way. The failing industry was met with, social, racial, and political tensions. Hundreds of thousands of people fled the city, and today the population is less than half of what it was in 1950 (For a detailed analysis of Detroit's fall, visit this page).

Industrialism; urban decay; Census; The collapse of Detroit - latimes Imagine for a moment that every single person living in the city of San Jose, plus another 150,000 or so, just up and left. Vanished. Poof. Gone. Leaving their homes, business buildings and factories behind. Detroit’s white population rises Detroit’s white population rose by nearly 8,000 residents last year, the first significant increase since 1950, according to a Detroit News analysis of U.S. Census Bureau data. The data, made public Wednesday, mark the first time census numbers have validated the perception that whites are returning to a city that is overwhelmingly black and one where the overall population continues to shrink.

Anatomy of Detroit’s Decline - Interactive Feature Mayor Coleman A. Young of Detroit at an event in 1980. Richard Sheinwald/Associated Press The financial crisis facing Detroit was decades in the making, caused in part by a trail of missteps, suspected corruption and inaction. Here is a sampling of some city leaders who trimmed too little, too late and, rather than tackling problems head on, hoped that deep-rooted structural problems would turn out to be cyclical downturns. Charles E. How job loss and isolation help keep Flint poor If you’re poor, live in Flint, and want work, your job choices are few, far away, and unlikely to pay a wage that helps get you out of poverty. Nearly half the working population travels 25 miles or more to work each day. And nearly 80% of them earn $40,000 or less for their trouble; almost 40% earn $15,000 or less. And just getting to work is a ridiculous challenge. The city has been losing jobs — to the suburbs, to other states, to other countries — for decades, and lost 33% of its employment opportunities just since 2002. Downtown Flint lost 20% of its jobs between 1998 and 2013 as nearly 150 businesses packed up and went away.

Abandoned Houses: One Block in Detroit Pictured here are abandoned homes found on one block on Detroit's East Side. Some 45,000 abandoned houses pock Detroit, and the city only demolishes only 500 a year, thanks to concerns over lawsuits and environmental hazards, as well as lack of funding. The resulting rot and arson help pull the city further and further down. As Charlie LeDuff writes in his piece What Killed Aiyana Stanley-Jones: "Detroit has been synonymous with arson since the '80s, when the city burst into flames in a pre-Halloween orgy of fire and destruction known as Devil's Night. At its peak popularity, 810 fires were set in a three-day span.