Why U.S. Airlines Are Dropping Flights to Cuba. MIAMI — Although there has been an explosion of Americans traveling to Cuba since former President Barack Obama relaxed travel restrictions, airlines continue to reduce or eliminate flights to Cuba altogether. 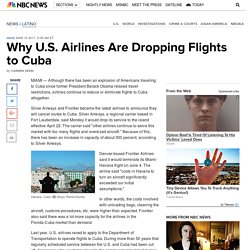 Silver Airways and Frontier became the latest airlines to announce they will cancel routes to Cuba. Silver Airways, a regional carrier based in Fort Lauderdale, said Monday it would drop its service to the island effective April 22. The carrier said "other airlines continue to serve this market with too many flights and oversized aircraft. " Because of this, there has been an increase in capacity of about 300 percent, according to Silver Airways. Denver-based Frontier Airlines said it would terminate its Miami-Havana flight on June 4. The Curse of Econ 101 - The Atlantic. In a rich, post-industrial society, where most people walk around with supercomputers in their pockets and a person can have virtually anything delivered to his or her doorstep overnight, it seems wrong that people who work should have to live in poverty. 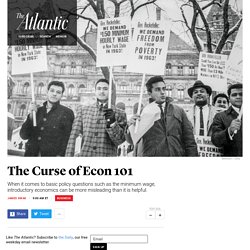 Yet in America, there are more than ten million members of the working poor: people in the workforce whose household income is below the poverty line. Looking around, it isn’t hard to understand why. The two most common occupations in the United States are retail salesperson and cashier. Eight million people have one of those two jobs, which typically pay about $9–$10 per hour. Hotter Days Will Drive Global Inequality. Extreme heat, it turns out, is very bad for the economy. 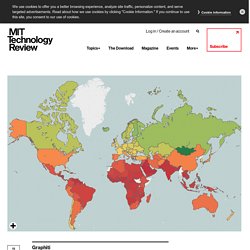 Crops fail. People work less, and are less productive when they do work. That’s why an increase in extremely hot days is one of the more worrisome prospects of climate change. To predict just how various countries might suffer or benefit, a team of scientists at Stanford and the University of California, Berkeley, have turned to historical records of how temperature affects key aspects of the economy. When they use this data to estimate how various countries will fare with a warming planet, the news isn’t good. The average global income is predicted to be 23 percent less by the end of the century than it would be without climate change.

Because poorer countries, including those in much of South America and Africa, already tend to be far hotter than what’s ideal for economic growth, the effect of rising temperatures will be particularly damaging to them. Hot Tempers, Poor Yields, and Sluggish Economies. Presidential Debate Follow-up: Could U.S. Economy Grow As Fast As India's Or China's? : Goats and Soda.

China has been growing faster than the U.S. for years. 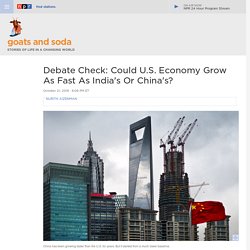 But it started from a much lower baseline. Rob Smith/Getty Images hide caption toggle caption Rob Smith/Getty Images China has been growing faster than the U.S. for years. Should the United States aspire to the kind of fast-paced economic growth China and India enjoy? Not always low wages: What Walmarts pay-rise experiment says about the future of low-wage work. Oliver Hart and Bengt Holmstrom win the Nobel prize for economic sciences. The world is ripe for new economic thinking. Barack Obama, Inequality Fighter. A new report from the Congressional Budget Office on household income since 1979 reaches two stark and significant conclusions. 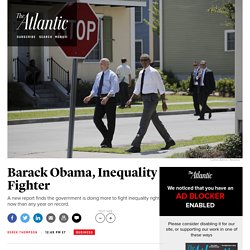 Inequality is growing. Wrong all along: Neoliberal IMF admits neoliberalism fuels inequality and hurts growth. The world’s largest evangelist of neoliberalism, the International Monetary Fund, has admitted that it’s not all it’s cracked up to be. 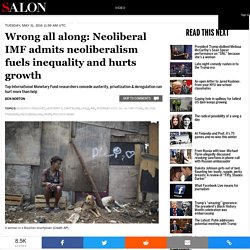 Neoliberalism refers to capitalism in its purest form. It is an economic philosophy espoused by libertarians — and repeated endlessly by many mainstream economists — one that insists that privatization, deregulation, the opening up of domestic markets to foreign competition, the cutting of government spending, the shrinking of the state and the “freeing of the market” are the keys to a healthy and flourishing economy. Yet now top researchers at the International Monetary Fund, or IMF, the economic institution that has proselytized — and often forcefully imposed — neoliberal policies for decades, have conceded that the “benefits of some policies that are an important part of the neoliberal agenda appear to have been somewhat overplayed.” One, neoliberal policies result in “little benefit in growth.”

The researchers don’t throw neoliberalism out completely. This cartoon explains how the rich got rich and the poor got poor. The problem with profits. These Charts Show Why Trump and Bernie Are Wrong to Attack Free Trade. Like most economists, I am strongly inclined toward free trade. 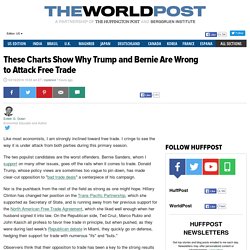 The oil conundrum. OIL traders are paying unusual attention to Kharg, a small island 25km (16 miles) off the coast of Iran. 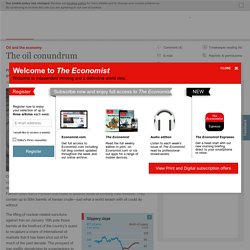 On its lee side, identifiable to orbiting satellites by the transponders on their decks, are half a dozen or so huge oil tankers that have been anchored there for months. Farther down Iran’s Persian Gulf coast is another flotilla of similarly vast vessels. They contain up to 50m barrels of Iranian crude—just what a world awash with oil could do without. The lifting of nuclear-related sanctions against Iran on January 16th puts those barrels at the forefront of the country’s quest to recapture a share of international oil markets that it has been shut out of for much of the past decade. The slide marks the latest act in a dramatic reversal of fortunes for the oil industry that is, in turn, roiling the global economy. The Conservative Case for Solar Subsidies. Photo TO many skeptics, particularly on the right, the spectacular failure of the solar-panel manufacturer Solyndra in 2011, after receiving a $535 million loan guarantee from the Department of Energy, demonstrated the industry’s shaky future and the danger of government efforts to subsidize it to success. 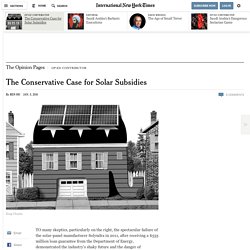 Fast forward to today. Solar energy prices have continued to fall rapidly, twice as many Americans work in the solar industry as in coal mining, and last year one-third of new electricity generation came from . Solar, long viewed through the lens of crony capitalism, has shown the ability to inject real market competition in energy distribution, one of the last monopolies in the energy sector, while improving the efficiency of the grid and putting more dollars in the pockets of middle-class Americans. Conservatives, in other words, need to take another look at solar. The case for solar isn’t limited to prices and jobs. Solar also solves an efficiency challenge. You Really Don’t Need To Work So Much. Recently, the New York Times ran a front-page story about the conditions for white-collar workers at Amazon. 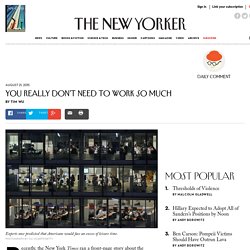 It revealed a workplace where abrupt firings are common, grown men and women cry at their desks, and people are scolded for not responding to e-mails after midnight. The story made clear how much things have changed in the American workforce. Once upon a time, it was taken for granted that the wealthier classes enjoyed a life of leisure on the backs of the proletariat. Today it is people in skilled trades who can most find reasonable hours coupled with good pay; the American professional is among those subject to humiliation and driven like a beast of burden. No one thought things would be this way. Fifty years later, it’s fair to say that the looming leisure crisis has been licked.