Facebook. ◄ Chateau de Versailles, France [HD] ► Marine Le Pen Denies State’s Role in Deporting French Jews During WWII. Over the course of two days in July of 1942, French authorities rounded up some 13,000 Jews in what is known as the “Vél d'Hiv roundup," taking them to the Drancy internment camp and the Vélodrome d'Hiver, an indoor bicycle racing track and stadium in Paris. 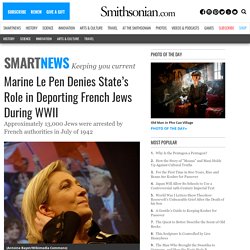 The 7,000 detainees packed away in the Vélodrome d'Hiver were not given food, water or access to sanitary facilities, according to the United States Holocaust Memorial Museum. But a worse fate awaited the prisoners: they were soon deported to Auschwitz. Several French presidents have acknowledged the state’s complicity in the Vélodrome d'Hiver—known colloquially as “Vel d’Hiv”—roundups, which were carried out in collaboration with the Nazis during WWII. On Sunday, Le Pen suggested that country’s wartime Vichy government, a Nazi puppet state established in the unoccupied zone of southern France, was to blame for the atrocity. Le Pen now faces bruising criticism from political opponents and advocates. Operating ball turret in the Collings B-24J at Bomber Camp. J'Accuse Part 2 - Full Movie - (1919) First World War Casualties. Vintage Audio - Over There. Reproduced below are the lyrics to America's best-known World War One song, Over There. 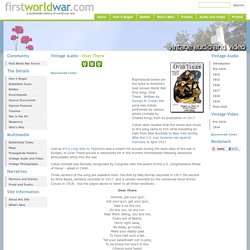 Written by George M. Cohan the song was widely performed by various artists (initially by Charles King) from its publication in 1917. Cohan later recalled that the words and music to the song came to him while travelling by train from New Rochelle to New York shortly after the U.S. had declared war against Germany in April 1917. J'accuse (1919) The March of the Dead. J'accuse (1919 film) - Wikipedia. In a Provençal village in the south of France, the villagers welcome the declaration of war with Germany in 1914 and flock to enlist. 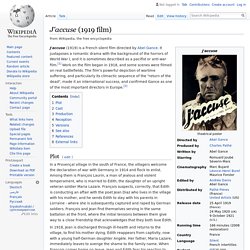 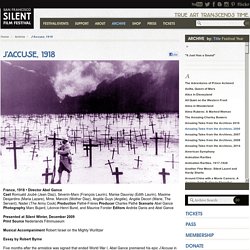 J’Accuse was not the first antiwar film, but the way Gance told his story, using expressionistic camerawork and innovative editing techniques, profoundly influenced filmmaking from Hollywood to Moscow. Marine Le Pen. Facebook. Maurice Papon, Convicted Vichy Official, 96, Dies. Soon caught and bundled back to France, where his attempted escape had invalidated his appeal, he started serving his sentence in October 1999. 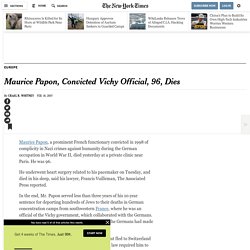 The European Court of Human Rights ruled in 2002 that the French law on appeals had violated his civil rights, but he stayed in the Santé Prison in Paris until that September, when a French court agreed with a new appeal that heart trouble and advanced age should spare him further jail time. “I have no objection to putting Vichy on trial,” he had said before facing charges. “I just don’t want the trial to take place on my back.” Vichy did go on trial with him, and the verdict seemed to confirm, as President Jacques Chirac had first acknowledged in 1995, that France bore criminal responsibility for what officials like Mr. Papon had done in collaborating with the Germans.

“Obviously,” observed Michel Slitinsky, a Holocaust survivor who hunted down some of the documentation of Mr. Tall and self-assured, Mr. Gmail - Free Storage and Email from Google. The AP European History Exam. Important Updates New Exam for Classroom Use A secure 2016 AP European History Exam is now available on the AP Course Audit website. 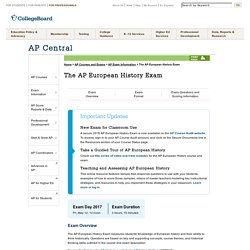 To access, sign in to your AP Course Audit account, and click on the Secure Documents link in the Resources section of your Course Status page. Take a Guided Tour of AP European History Check out this series of video overview modules for the AP European History course and exam. Teaching and Assessing AP European History This online resource features sample free-response questions to use with your students, examples of how to score those samples, videos of master teachers modeling key instructional strategies, and resources to help you implement these strategies in your classroom. 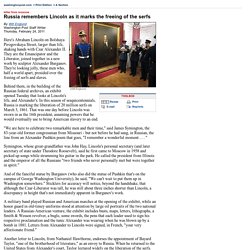 Mine. World Studies. Community Service. Donald Trump and Steve Bannon are using a political strategy that's remarkably similar to that of the Russian Revolution — Quartz.