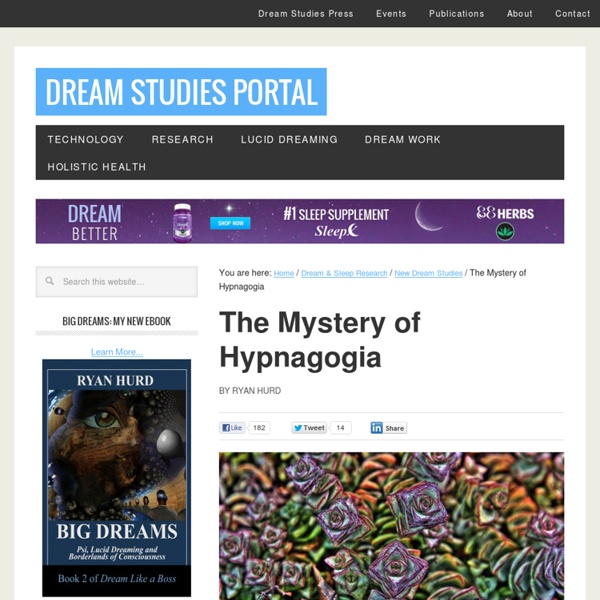 Hypnagogia is the imagery, sounds and strange bodily feelings that are felt at “sleep onset.” This is a simplification though, as researchers have noted hypnagogic imagery in the lab at periods of quiet wakefulness as well as stage 1 sleep. Others have correlated hypnagogia with pre-sleep alpha waves and also REM intrusion into sleep onset. The truth is that the wake-sleep transition is still not understood. And neither are its trippy visuals. whispy lights, multi-dimentional geometric objects, or a sudden image like a stranger’s face Few people remember hypnagogic imagery. Strange noises, voices and rushing sounds are typical, as well as weird mechanistic sounds like beeps and boops. Some hear music — I personally have had lucid hypnagogic orchestras from time to time, with the ability to listen passively or focus on a particular instrument to induce a solo. Entoptica - by Ryan Hurd, 2005, acrylic: inspired by my hypnagogic imagery Some people are haunted by the hypnagogic imagery.

The New Map Of The Brain Trying to map the brain has always been cartography for fools. Most of the other parts of the body reveal their workings with little more than a glance. The heart is self-evidently a pump; the lungs are clearly bellows. But the brain, which does more than any organ, reveals least of all. International Association for the Sudy of Dreams IASD encourages its members to host regional meetings and co-sponsored events, and IASD will provide logistical and financial support to promote such events. The benefits of regional meetings and co-sponsored events are twofold. First, they help IASD members in a particular geographical region to meet each other, socialize, network, and share their different approaches to dreams. Second, they help to advance the basic mission of IASD, which is to broaden public awareness and appreciation of dreams. Although these are the primary goals, another aim is to generate new funds for IASD’s educational and outreach programs. Dreams, Shamanism, & Mythology

The human brain can create structures in up to 11 dimensions Neuroscientists have used a classic branch of maths in a totally new way to peer into the structure of our brains. What they've discovered is that the brain is full of multi-dimensional geometrical structures operating in as many as 11 dimensions. We're used to thinking of the world from a 3-D perspective, so this may sound a bit tricky, but the results of this new study could be the next major step in understanding the fabric of the human brain - the most complex structure we know of. This latest brain model was produced by a team of researchers from the Blue Brain Project, a Swiss research initiative devoted to building a supercomputer-powered reconstruction of the human brain. The team used algebraic topology, a branch of mathematics used to describe the properties of objects and spaces regardless of how they change shape.

Reminiscence bump explanations: Why we remember young adulthood better than any other age YanLev/iStockphoto/Thinkstock. Twentysomethings are having a moment. They’re inspiring self-help guides (see Meg Jay’s The Defining Decade: Why Your Twenties Matter—And How To Make the Most of Them Now), hit television shows, Tumblrs-turned-handbooks, and lyrical New Yorker think pieces. Modafinil Modafinil is a wakefulness-promoting agent[3] (or eugeroic) that is approved by the United States' Food and Drug Administration (FDA) for treatment of wakefulness disorders such as narcolepsy, shift work sleep disorder,[4][5] and excessive daytime sleepiness associated with obstructive sleep apnea.[6] In English-speaking countries it is sold under the brand names: Alertec (CA), Modavigil (AU, NZ), and Provigil (IE, ZA, UK, US). Medical uses[edit] Approved uses[edit] In 1998, modafinil was approved by the U.S.

Sinister Minds: Are Left-Handed People Smarter? Cesare Lombroso, the father of modern criminology, owes his career to a human skull. In 1871, as a young doctor at a mental asylum in Pavia, Italy, he autopsied the brain of Giuseppe Villela, a Calabrese peasant turned criminal, who has been described as an Italian Jack the Ripper. “At the sight of that skull,” Lombroso said, “I seemed to see all at once, standing out clearly illuminated as in a vast plain under a flaming sky, the problem of the nature of the criminal, who reproduces in civilised times characteristics, not only of primitive savages, but of still lower types as far back as the carnivora.” How, Exactly, Do Our Brains Construct Reality? ‹ Literary Hub Will Storr on the Neuroscience Behind the World We See In order to tell the story of your life, your brain needs to conjure up a world for you to live inside, with all its colors and movements and objects and sounds. Just as characters in fiction exist in a reality that’s been actively created, so do we. But that’s not how it feels to be a living, conscious human. It feels as if we’re looking out of our skulls, observing reality directly and without impediment.

Reticular activating system History and Etymology[edit] Moruzzi and Magoun first investigated the neural components regulating the brain’s sleep-wake mechanisms in 1949. Physiologists had proposed that some structure deep within the brain controlled mental wakefulness and alertness.[1] It had been thought that wakefulness depended only on the direct reception of afferent (sensory) stimuli at the cerebral cortex. The direct electrical stimulation of the brain could simulate electrocortical relays. Magoun used this principle to demonstrate, on two separate areas of the brainstem of a cat, how to produce wakefulness from sleep. Next, the significance of this newly identified relay system was evaluated by placing lesions in the medial and lateral portions of the front of the midbrain.