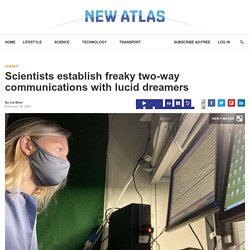 This is a big deal for scientists trying to work out what the heck is going on as we sleep, because typically they've had to rely on the fragmented, fading scraps of memory people have once they've woken up. "Our experimental goal is akin to finding a way to talk with an astronaut who is on another world," reads the introduction of a combined study between four separate groups in France, Germany, the Netherlands and the USA. Dormio: Interfacing with Dreams to Augment Human Creativity.

Inspiration Sleep is a forgotten country of the mind. 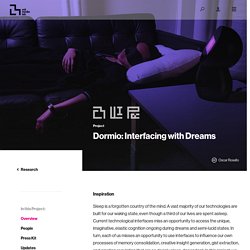 A vast majority of our technologies are built for our waking state, even though a third of our lives are spent asleep. Current technological interfaces miss an opportunity to access the unique, imaginative, elastic cognition ongoing during dreams and semi-lucid states. In turn, each of us misses an opportunity to use interfaces to influence our own processes of memory consolidation, creative insight generation, gist extraction, and emotion regulation that are so deeply sleep-dependent. In this project, we explore ways to augment human creativity by extending, influencing, and capturing dreams in Stage 1 sleep. Scientific Background. A sleep expert explains what happens to your brain when you dream. Subconscious Can’t Wait To Turn Offhand Remark From Boss Into Dream About Drowning Horse.

BROOKLINE, MA—Chomping at the bit to twist the benign statement into an absolutely terrifying image, the subconscious of local man David Vanwell reportedly couldn’t wait Monday to turn an offhand remark by his boss into a dream about a drowning horse. 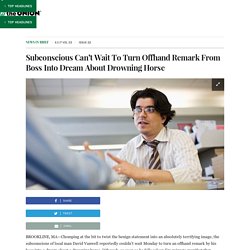 “Oh yeah, as soon as he falls asleep I’m going to manifest that frivolous comment from the earlier meeting into a horrifying visual of a stallion vainly flailing for its life as it slowly disappears underwater,” said Vanwell’s psyche, excitedly planning every detail of the panicked horse’s descent to a watery grave that will somehow represent his supervisor’s innocuous observation.

“I’ve been waiting for the perfect excuse to drop a stallion in an above-ground swimming pool where it can sink down, down, down as if to the bottom of the ocean even though the pool itself is only six feet high, and now I have it. How dreams predict the future by making sense of the past. Perhaps the most famous dream prediction comes from the Bible. 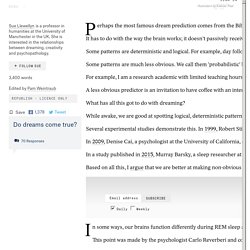 Pharaoh dreams of standing by the Nile. Seven sleek, fat cows emerge from the river, followed by seven scrawny, ugly cows that eat the plump, succulent ones. But what does it mean? Huffingtonpost. Can we unlearn social biases while we sleep? Xiaoqing Hu, University of Texas at Austin Your brain does a lot when you are asleep. 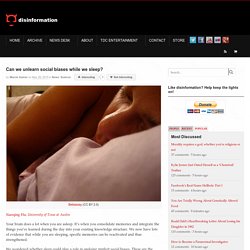 It’s when you consolidate memories and integrate the things you’ve learned during the day into your existing knowledge structure. We now have lots of evidence that while you are sleeping, specific memories can be reactivated and thus strengthened. We wondered whether sleep could play a role in undoing implicit social biases. These are the learned negative associations we make through repeat exposure – things like stereotypes about women not being good at science or biases against black people. How does sleep strengthen memories? The mechanism that strengthens and stabilizes memories of new information while you sleep is replay. This replay takes memories that are still fresh and malleable and makes them more stable and long-lasting. To do this, researchers have paired unique sound cues with learning episodes, so that there are strong associations between the sound cues and the information learned. Theconversation.

Rapid eye movements (REMs) during sleep may contribute to the visual part of our dreams by acting as a switch from image to image, researchers have found. 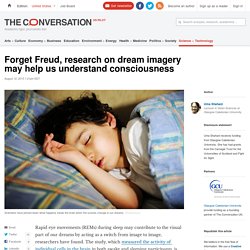 The study, which measured the activity of individual cells in the brain in both awake and sleeping participants, is important because it is the first of its kind and provides a great starting point for uncovering the deeper secrets of human consciousness. Consciousness can roughly be summed up as our awareness of the environment and our ability to respond to it. However, Sigmund Freud and his followers have described dreams as deep-seated, unconscious psychic desires. Today, many instead see them as an interpretation of images of the environment stored in certain parts of the brain. These images are thought to be projected onto the visual cortex so we can “see them” in our dreams. Physiologists and experimental psychologists refer to mental images of 3D scenes as “visuospatial imagery”, which is similar to what we see when we dream. What is going on in your brain when you sleep? Sleep has profound importance in our lives, such that we spend a considerable proportion of our time engaging in it. 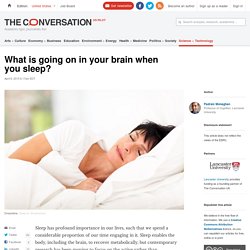 Sleep enables the body, including the brain, to recover metabolically, but contemporary research has been moving to focus on the active rather than recuperative role that sleep has on our brain and behaviour. Sleep is composed of several distinct stages. Two of these, slow-wave (or deep) and REM sleep, reflect very different patterns of brain activity, and have been related to different cognitive processes. Slow-wave sleep is characterised by synchronised activity of neurons in the neo-cortex firing at a slow rate, between 0.5 and three times per second. The neo-cortex comprises the majority of the cerebral cortex in the brain which plays a role in memory, thought, language and consciousness.

Such patterns of brain activity during REM sleep are reminiscent of those observed during wakefulness, and for this reason REM sleep is often referred to as “paradoxical” sleep. Understanding sleep paralysis: a terrifying but unique state of consciousness. “I awake in bed … In the corner of the room there are two men. 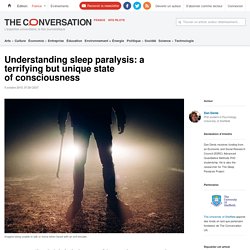 I cannot see them but I know that they are there, and what they look like. I can hear them talking. They are talking about murder. I cannot move. One of the men comes and stands directly above me … He spits, and his spit lands in the socket of my closed eye. This may sound like a scene from the X-Files, but it is actually a personal account of a real experience – told as part of a project on sleep paralysis. On October 9 a new documentary, The Nightmare, directed by Rodney Ascher, is being released in the UK. Hallucinations and risk factors.