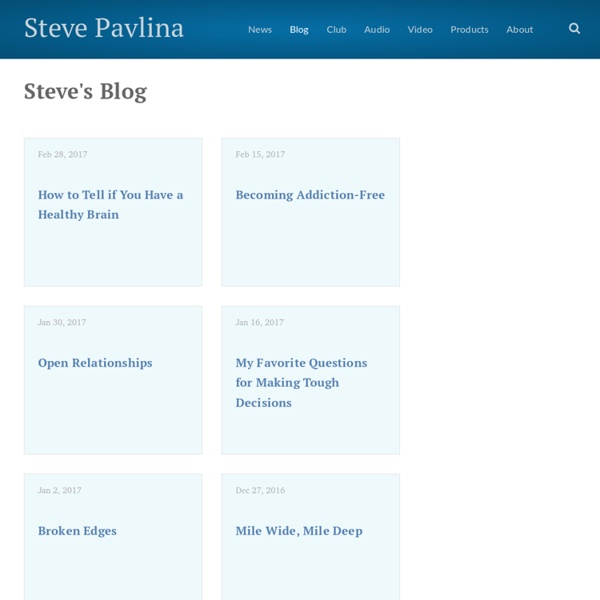 This is the fifth and final article in the series about the connection between entrepreneurship and personal growth called Entrepreneurs Grow at Warp Speed. Take command of your life As an entrepreneur you decide which goals, projects, and opportunities to pursue. You don’t have to waste your time working hard to achieve someone else’s goals. If you have ambitious dreams and if you like working on your own projects, you’ll probably enjoy running your own business. There’s nothing quite so sweet as spending decades of your life setting and achieving your own goals — and getting paid to do it. As an entrepreneur you can guide your business to help you achieve your personal goals. Another personal goal was to travel in Europe, which included subgoals like exploring Paris, London, Berlin, and Amsterdam. You won’t always be able to align a personal goal with your business, but at least as an entrepreneur, you can prevent your business from getting in the way of your other goals. Site Build It!

Sleep Suit Inspired by Dymaxion Sleeping Forrest Jessee has recently unveiled his Sleep Suit inspired by Buckminster Fuller’s practice of Dymaxion Sleeping – 30-minute naps over 24 hours – while simultaneously exploring the materiality requirements to accommodate such a function. Interaction between the human body and the suit is the form generator as well as the threshold medium between the internalized occupant and their immediate surroundings. The suit is comprised of structural pleats that serve multiple purposes. The interrelation between the occupant and the surroundings are challenged through the reinterpretation of personal space, and offer opportunity for varying sensations of associated temporality. The EVA foam pleats ensure the internal environment is breathable, while offering comfortable support for the body in numerous positions.

Darkworkers, Lightworkers, and Levels of Consciousness How can a darkworker experience higher levels of consciousness like unconditional love and peace? The original descriptions of the levels of consciousness are lightworker-biased. For a darkworker the level of unconditional love is directed inwardly as love of self. It’s like a highly concentrated form of arrogance. It may not be expressed outwardly in the form of a smug attitude, but inwardly the person comes to embrace the idea that s/he is the most important person on earth and should act accordingly. Honoring this perspective can actually lead to a state of peace that is virtually the opposite of humility.

How 30 Minutes a Day Can Increase Your Intelligence If you ask me, where humans go wrong is with their lack of patience. That, and their recent acquired taste for instant gratification. The reality is that things take time. Richard Branson didn’t become a millionaire overnight. Madonna was not an overnight success. Try Nasal Washing To Ease Cold And Allergy Symptoms Next time you feel the first stir of a cold or allergies — rhinitis, sinusitis, allergic asthma — try nasal washing with a saline solution for symptom relief. Nasal washing helps reduce the amount of mucus that drains from your nose and sinus passages during bouts of rhinitis or sinusitis. It is a particularly good practice to do before bed as drainage irritation is often worse at night. Nasal washing, also known as nasal irrigation, does not involve a drug, but a salt water solution that cleans mucus from the nose and sinus. It can make medication more effective, clean allergens and irritants from the nose, remove bacteria and viruses, and even reduce the swelling of nasal passages thereby boosting air flow. As someone whose quarterly sinus infections are now ancient history due to regular nasal washings, it’s changed my life.

Puffy Face - Beauty and Grooming Does your face tend to look puffy every now and again Here are some possible reasons, and what you can do to get rid of the puffiness. Do you ever wake up in the morning and wonder what happened to your face? It looks bloated and puffy, and you have no idea what went wrong. "I Sleep Two Hours Per Day"- Intro The INTRO It seems as if I have once again decided to inflict more harm (self-discipline really) onto myself in the name of I-dunno-what (something provocative). I’ve decided that on top of being Ubervegan I’m going to be sleeping two hours a day. Yup, TWO HOURS A DAY, for at least three months (aiming for a full year). Now, you may be wondering just how the f**k I’m going to live on two hours sleep per day for three months. The answer is simple really: through polyphasic sleeping.

Rise of the Lightworker Consider for a moment that you’re an individual cell in the larger body of humanity. What kind of cell are you? Do you strive to achieve your individual health and comfort? Do you work for the betterment of your nearby family cells? Do you have a sense of devotion to the improvement of the entire body? I’m going to use the cell-in-a-body analogy to clarify the difference between two different kinds of people: lightworkers and darkworkers.

Funding free clinics for Bhopal survivors Online Petition- Dow Chemical must clean up Union Carbide’s closed factory in Bhopal, India. Apr 17 2014 by Bhopal Medical Appeal Justin Senzer, a 10th grader at Herricks High School, won a First Place Senior Individual Documentary award during the 34th Annual Long Island Regional History Day Contest at Hofstra University. His documentary, about the Bhopal Disaster, will now go forward to the State level competition where we wish him the very best of luck. Justin was so moved by the story of Bhopal, and the ongoing disaster, that he has set up his own petition, on the change.org site, calling for Dow Chemical to do the right thing and clean up Union Carbide’s remaining toxic mess in Bhopal.