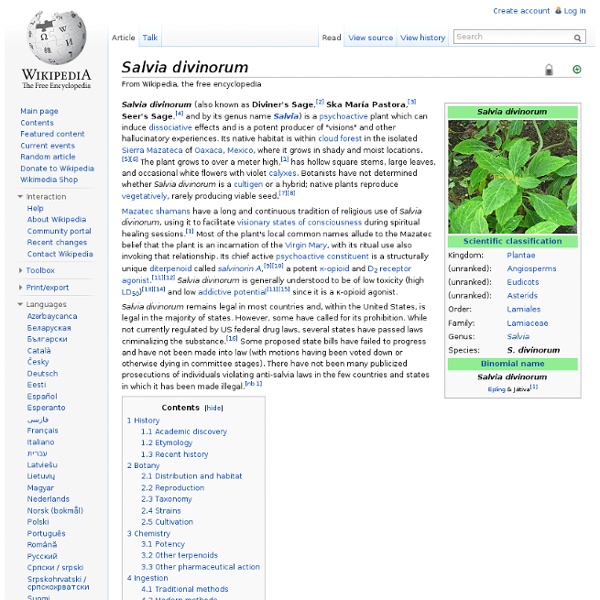 Salvia divinorum (also known as Diviner's Sage,[2] Ska María Pastora,[3] Seer's Sage,[4] and by its genus name Salvia) is a psychoactive plant which can induce "visions" and other hallucinatory experiences. Its native habitat is in cloud forest in the isolated Sierra Mazateca of Oaxaca, Mexico, where it grows in shady and moist locations.[5][6] The plant grows to over a meter high,[1] has hollow square stems, large leaves, and occasional white flowers with violet calyxes. Botanists have not determined whether Salvia divinorum is a cultigen or a hybrid; native plants reproduce vegetatively, rarely producing viable seed.[7][8] Mazatec shamans have a long and continuous tradition of religious use of Salvia divinorum, using it to facilitate visionary states of consciousness during spiritual healing sessions.[1] Most of the plant's local common names allude to the Mazatec belief that the plant is an incarnation of the Virgin Mary, with its ritual use also invoking that relationship. History

Selegiline Monoamine oxidase inhibitor Selegiline acts as a monoamine oxidase inhibitor, and increases levels of monoamine neurotransmitters in the brain. At typical clinical doses used for Parkinson's disease, selegiline is a selective and irreversible inhibitor of monoamine oxidase B (MAO-B), increasing levels of dopamine in the brain. Medical uses[edit] Parkinson's disease[edit] Selegiline has also been used off-label as a palliative treatment for dementia in Alzheimer's disease.[6] Depression[edit] Selegiline is also delivered via a transdermal patch used as a treatment for major depressive disorder.[9][10] Administration of transdermal selegiline bypasses hepatic first pass metabolism. Special populations[edit] For all human uses and all forms, selegiline is pregnancy category C: studies in pregnant lab animals have shown adverse effects on the fetus but there are no adequate studies in humans.[4][9] Side effects[edit] Interactions[edit] Pharmacology[edit] Pharmacodynamics[edit] Pharmacokinetics[edit]

Marijuana - Everything Shii Knows It was a lot more annoying to maintain this website after it closed than I expected. Even after I put up a big banner it turned out that I was hosting stuff here without copyrights and moral permissions. I need to focus on other things in my ife these days. A lot of 4chan stuff, including things taken from this wiki, can be found on GitHub (why GitHub? If you're interested in the history of 4chan, another guy named Cole Stryker documented it much better than I did. The funny guys behind the Zybourne Clock now have their own website. As for the rest... um... I invite you to check out the rest of my website if you like translations of manga and stuff.

Propylhexedrine Decongestant and stimulant drug Propylhexedrine, sold under the brand name Benzedrex, is a nasal decongestant, appetite suppressant, and psychostimulant medication. It is used medicinally for relief of congestion due to colds, allergies and allergic rhinitis. Propylhexedrine is most commonly found in over-the-counter Benzedrex inhalers. Benzedrex was first manufactured by Smith, Kline and French after the Benzedrine inhaler, which contained racemic amphetamine, became unavailable following the placement of amphetamines on the US Schedule II status (highest abuse potential, yet with accepted medicinal uses). Medical use[edit] Propylhexedrine is used to treat acute nasal congestion related to common cold,[1] allergies and hay fever. Contraindications[edit] Propylhexedrine should not be used if a MAOI has been used in the past 14 days or is currently in use, as this can result in hypertensive crisis. Pharmacology[edit] [edit] Chemistry[edit] Synthesis[edit] Preparation of propylhexedrine[16]

Terence McKenna rotten > Library > Biographies > Mad Science > Terence McKenna Terence McKenna was the Magellan of psychedelic head space, and humanity's first ambassador to the hyperdimensional machine elves of the Eschaton. McKenna was a true child of the '60s, graduating from UC Berkeley with one of those majors you could only get in Berkeley in the '60s — Ecology, Resource Conservation and Shamanism. When he got out of school, he set off for the Amazon, where he "studied" the native hallucinogenic drugs used in various South American shamanic traditions. McKenna studied these drugs repeatedly and in large doses, along with his brother, Dennis. While pursuing these scientific studies, McKenna experienced some interesting effects on his consciousness, not surprisingly. His work has influenced a generation of writers and philosophers, and his writings have been as influential as that of better-known contemporaries like Timothy Leary and Abbie Hoffman. Refined sugar was a particular target of his ire.

Speedball (drug) Combination of narcotics Cocaine powder Heroin powder "National Trends in Drug Abuse, Summer 1998, Special Section: Speedballing". U.S. Office of National Drug Policy. cannabis . net Pregabalin Anticonvulsant drug for treating convulsive, anxious and painfull conditions Anticonvulsant drug Pregabalin, sold under the brand name Lyrica among others, is an anticonvulsant and anxiolytic medication used to treat epilepsy, neuropathic pain, fibromyalgia, restless leg syndrome, opioid withdrawal and generalized anxiety disorder.[10][11][12] Its use in epilepsy is as an add-on therapy for partial seizures.[10] When used before surgery, it reduces pain but results in greater sedation and visual disturbances.[13] It is taken by mouth.[10] Medical uses[edit] Box of 150 mg Lyrica (pregabalin) capsules from Finland Seizures[edit] Pregabalin is useful when added to other treatments, when those other treatments are not controlling partial epilepsy.[25] Its use alone is less effective than some other seizure medications.[26] It is unclear how it compares to gabapentin for this use.[26] Neuropathic pain[edit] Anxiety disorders[edit] Other uses[edit] Adverse effects[edit] Withdrawal symptoms[edit] [edit]