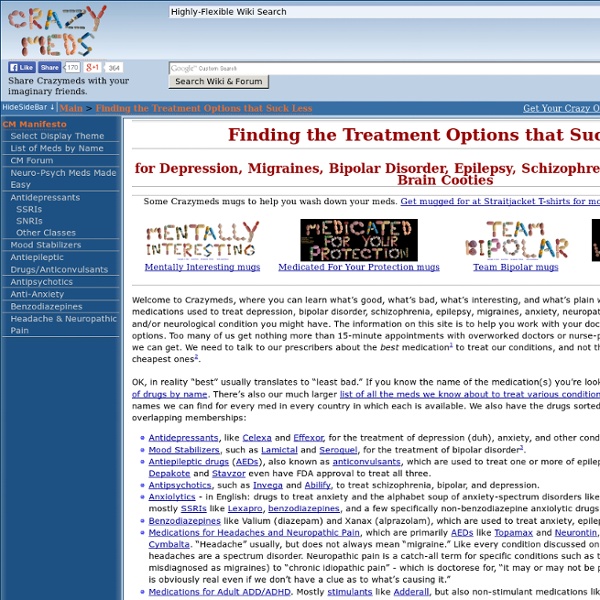 Welcome to Crazymeds, where you can learn what’s good, what’s bad, what’s interesting, and what’s plain weird and funny about the medications used to treat depression, bipolar disorder, schizophrenia, epilepsy, migraines, anxiety, neuropathic pain, or whatever psychiatric and/or neurological condition you might have. The information on this site is to help you work with your doctor(s) to find the right treatment options. Too many of us get nothing more than 15-minute appointments with overworked doctors or nurse-practitioners, so we need all the help we can get. We need to talk to our prescribers about the best medication1 to treat our conditions, and not the most profitable ones, or the cheapest ones2. OK, in reality “best” usually translates to “least bad.” If you know the name of the medication(s) you’re looking for, you’ll probably want our list of drugs by name. Antidepressants, like Celexa and Effexor, for the treatment of depression (duh), anxiety, and other conditions.

Finding a Psychiatrist: questions to ask, where to look, what to expect It is not always a simple chore to find a good psychiatrist but with some searching and some work you can succeed at finding one who suits both your unique personality as well as the problems you are having. The first thing you will want to do is to formulate a list of potential psychiatrists and then take the time to call each one and decide for yourself which one on the list is right for your personal life situation. The insurance company you deal with or the HMO you are a part of is likely to be able to provide you with a list of psychiatrists for you to consider. Many psychiatrists only see patients who have been referred by their family doctor so find this out before you do anything else and/or waste time trying to contact the psychiatrist on your own. You can get a referral for a psychiatrist from a variety of sources be it the general practitioner you go to, another therapist or any healthcare professional that you deal with.

Your Cells Are Listening: How Talking To Your Body Can Help You Heal By Therese Wade, MSc Guest Writer for Wake Up World “Every part of your body has its own consciousness or its own soul.” Mirtazapine Mirtazapine (brand names: Avanza, Axit, Mirtaz, Mirtazon, Remeron, Zispin)[6] is a noradrenergic and specific serotonergic antidepressant (NaSSA) introduced by Organon International in the United States in 1996,[2] and is used primarily in the treatment of depression. It is also commonly used as an anxiolytic, hypnotic, antiemetic, and appetite stimulant. In structure, mirtazapine can also be classified as a tetracyclic antidepressant (TeCA) and is the 6-aza analogue of mianserin.[6] It is also racemic - occurs as a combination of both R and S-stereoisomers.[6] Its patent expired in 2004, so generic versions are available.[7] §Medical uses[edit] §Approved and off-label[edit]

The over-medicalisation of illness in the NHS is down to patients acting like customers The most upsetting and haunting of the things I found when I was sorting through my late mother’s things was a handwritten list in a notebook by the chair where she always sat. Every day for a short while, before she was admitted to hospital and diagnosed with secondary renal cancer of the bone, she’d been jotting down the details of the painkillers she was taking and the time at which she was taking them, in a very shaky hand. These weren’t strong, addictive painkillers. Erowid Experience Vaults: Sertraline - Cranked Nosebleeds - 9850 Citation: The K-hole Kid. "Cranked Nosebleeds: An Experience with Sertraline (ID 9850)". Erowid.org. Aug 4, 2004. erowid.org/exp/9850 I am a 15 year old male currently living in Arizona. I was put on Zoloft in April 2001 for OCD.

Down on the Pharm': All About Acute Dystonic Reaction Author: Colleen M Hayes, MBA, RN, EMT-P An EMSvillage.com member recently asked, "What are the most common signs and symptoms of a Dystonic Reaction and what is the emergency treatment? Also, what causes these reactions?" In this edition of EMSvillage.com we'll zoom in on Acute Dystonic Reactions and answer this member's questions! Introduction:Dystonia is not a breakaway Soviet Republic, but a movement disorder. In the EMS setting acute dystonic (AD) reaction is most often encountered as an adverse response to certain types of medications.

Are there disorders or conditions associated with spina bifida? Health issues are different for each person with spina bifida. Open spina bifida (myelomeningocele)—in which the spinal cord is exposed—tends to cause more severe problems.1 Hydrocephalus