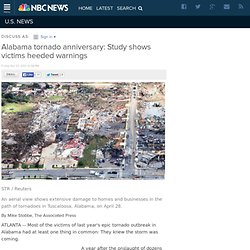 By Mike Stobbe, The Associated Press ATLANTA -- Most of the victims of last year's epic tornado outbreak in Alabama had at least one thing in common: They knew the storm was coming. A year after the onslaught of dozens of twisters killed at least 250 people in Alabama and more elsewhere in the South, federal researchers are completing a study of who died and where they were when it happened. Among the conclusions so far: Nearly half of the people who died had been advised to take shelter. But many of the tornadoes were so fierce that few structures were able to withstand them. These were catastrophic winds that could destroy pretty much anything in its path," Cindy Chiu, an epidemic intelligence service officer, said in reporting preliminary findings this month at a Centers for Disease Control and Prevention conference in Atlanta. 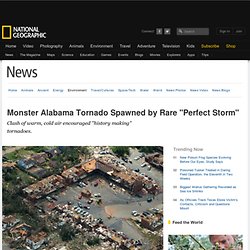 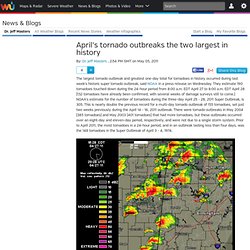 They estimate 190 tornadoes touched down during the 24-hour period from 8:00 a.m. EDT April 27 to 8:00 a.m. EDT April 28 (132 tornadoes have already been confirmed, with several weeks of damage surveys still to come.) NOAA's estimate for the number of tornadoes during the three-day April 25 - 28, 2011 Super Outbreak, is 305. This is nearly double the previous record for a multi-day tornado outbreak of 155 tornadoes, set just two weeks previously during the April 14 - 16, 2011 outbreak. Figure 1. Figure 2. The death toll for the epic outbreak continues to fluctuate, and has decreased substantially to 318. The Tuscaloosa-Birmingham tornado caused at least 65 fatalities. NOAA estimates there were more than 600 tornadoes during the month of April 2011, shattering previous records. 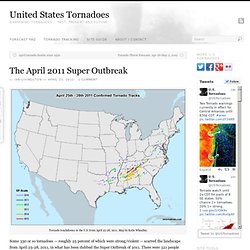 Map by Katie Wheatley. Some 350 or so tornadoes — roughly 25 percent of which were strong/violent — scarred the landscape from April 25-28, 2011, in what has been dubbed the Super Outbreak of 2011. There were 321 people killed during this period, with 316 of those deaths coming on April 27 alone. On April 27, 15 violent tornadoes rated EF-4 or higher (including four EF-5s) struck the states of Mississippi, Alabama, Tennessee and Georgia. Alabama was the hardest hit, with 9 violent tornadoes touching down there, and 11 total crossing within its boundaries. It was well advertised that an event of an unusual magnitude was on its way, with forecasters and hobbyists taking notice about a week out, and the alarm growing stronger by the day. A tremendous longwave trough began to eject out of the West on the 25th as a frontrunning vort. max spawned a number of tornadoes across the South from Texas and to the east. 2011's Tornado Superoutbreak. By Dr. 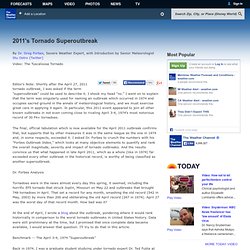 Greg Forbes, Severe Weather Expert, with Introduction by Senior Meteorologist Stu Ostro (Twitter) Video: The Tuscaloosa Tornado Editor's Note: Shortly after the April 27, 2011 tornado outbreak, I was asked if the term "superoutbreak" could be used to describe it. I shook my head "no. " Super tornado outbreak of April 27, 2011: one year anniversary - Capital Weather Gang. Posted at 10:10 AM ET, 04/27/2012 Apr 27, 2012 02:10 PM EDT TheWashingtonPost. 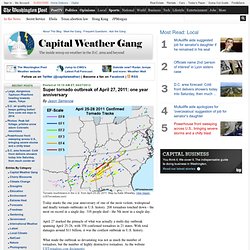