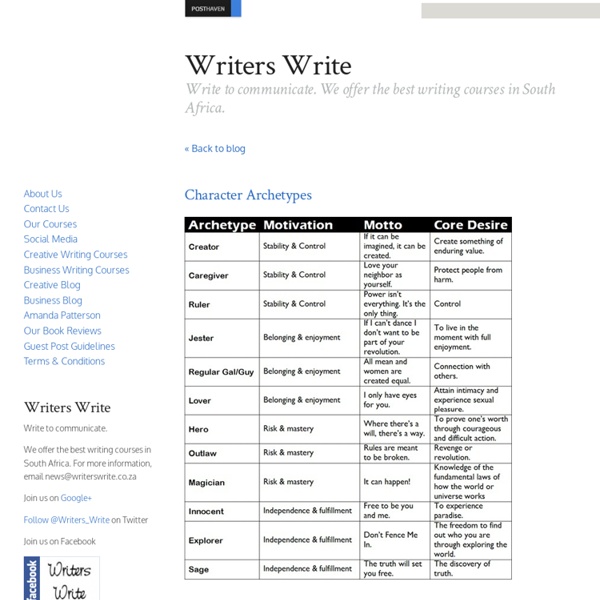 This is a summary of 12 archetypes as defined by Pearson and Mark in The Hero and Outlaw. Source for Image Writers Write offers the best writing courses in South Africa. To find out about Writers Write - How to write a book, or The Plain Language Programme - Writing courses for business, email news@writerswrite.co.za

Main/Character Flaw Index To make characters realistic and relatable they are given flaws, because if there is anything a writer can be sure of it is that no one in their audience will be perfect. Flaws are character traits that have a negative impact in the narrative, unless they are simply informed. They can also be exploited. See Good Flaws, Bad Flaws for a scale of flaw acceptability.

Body Atlas Reveals Where We Feel Happiness and Shame Yellow shows regions of increased sensation while blue areas represent decreased feeling in these composite images. Image courtesy of Lauri Nummenmaa, Enrico Glerean, Riitta Hari, and Jari Hietanen. Chests puffing up with pride — and happiness felt head to toe — are sensations as real as they are universal. And now we can make an atlas of them. Researchers have long known that emotions are connected to a range of physiological changes, from nervous job candidates’ sweaty palms to the racing pulse that results from hearing a strange noise at night. But new research reveals that emotional states are universally associated with certain bodily sensations, regardless of individuals’ culture or language.

Character and Characterisation in the Novel How to write convincing characters Characterisation - the task of building characters - isn't easy. But if you're struggling to build characters with real life and vigour, just follow these rules. If you do follow them correctly, we can pretty much guarantee that your characterisation will be just fine! Know what kind of character you are writing There are roughly two types of protagonist in fiction. Character Questionnaires - Get to Know Your Characters Receive more writing tips and advice (along with special offers and other Gotham news). One of the best ways to get to know your characters is to ask questions about them. Many writers do this as a kind of homework before they actually start writing a story. The more you know your characters, the fuller they will be.

Creating Stunning Character Arcs, Pt. 1: Can You Structure Characters? What if there were a sure-fire secret to creating stunning character arcs? Would you be interested in discovering it? If you care about connecting with readers, grabbing hold of their emotions, and creating stories that will resonate with them on a level deeper than mere entertainment, then the answer has to be a resounding yes! But here’s the thing about character arcs: they’re way too easy to take for granted. 8 ½ Character Archetypes You Should Be Writing Here’s the thing about character archetypes: everybody’s got his own take. Do you run with Joseph Campbell’s gazillion and one Jungian archetypes? How about Dramatica’s double quad of eight archetypes? Or maybe screenwriter Michael Hauge’s simple offering of four main players? Nothing wrong with running with all of them. The fact that archetypes are both universally applicable and yet endlessly varying provides authors with both structure and flexibility.

How to Enhance Intuition: Understanding the Four Forms of Human Awareness By Ethan Indigo Smith Guest Writer for Wake Up World You are intuitive. You are capable of metaphysical observation that would make angels jealous. And yet as mortals we are all susceptible to the eternal rule applicable to systems in impermanence; move it or lose it. The Inner Struggle: Guides for Using Inner Conflict That Make Sense By Janice Hardy, @Janice_Hardy I sat in on an amazing workshop while I was at RWA that made something typically vague very clear and applicable. Michael Hague's Using Inner Conflict to Create Powerful Love Stories. It was one of those workshops that discussed what I already knew, but Hague presented it in such a way that I clearly saw a super easy way to apply inner journeys to my stories. While the workshop was about romance specifically, the pieces of Hague’s inner conflict really work for any character journey.

"I Need Help Naming My Character!" - What To Do When You Don't Know What To Name Your Character I encounter so many people who are stuck on what to name their characters, so I've decided to write down all of my advice and put it onto one page. If you're writing a fanfiction, pay attention to the names of the canon characters and see if you can notice any patterns or themes. Characters in The Hunger Games tend to have names relating to nature, or something otherwise important or relevant to their districts of origin. Characters in Harry Potter usually have meaningful names, but also have alliterative names, names that sound whimsical or slightly silly, or even themed names (the Black family having a tradition of naming children after celestial objects). Humans in Homestuck have four-letter first names and six or seven-letter surnames.

6 Ways to Make Sure Your Reader’s Brain Syncs with Your Protagonist’s Brain photo by Andres Musta via Flickr Because here’s the thing: it’s not fiction. It’s fact. Except, you know, for the Vulcan part. And, okay, the part where you have to put your fingertips on the other guy’s face to do it.

The 12 brand archetypes all successful businesses are built on Successful brands have a strong sense of identity, one that mirrors the hopes and aspirations of their customers. But finding your voice – especially as a small business – can be difficult. And expensive. Identifying your brand archetype from this list will save you time and money and connect you instantly to your audience. Why do so many films seem to have the exact same characters in them? The rugged action hero with a tortured past.

Psychedemia (movie) “Psychedemia” was the first academic conference funded by an American university to explicitly focus on the risks and benefits of psychedelic experience. Ph.D’s, M.D.’s, M.A’s, graduate students and lay folk from all walks of life convened at the University of Pennsylvania over the 27th-30th of September 2012 to present new research addressing the historical and potential influences of psychedelics on knowledge production, health, and creativity. The four day event brought together scientists, artists, journalists, historians and philosophers from more than 10 countries for an Ivy League convocation unprecedented not only in view of its controversial subject matter, but in its unparalleled inter-disciplinary scope.