Top 10 Tricks to Make your Villain Stand Out 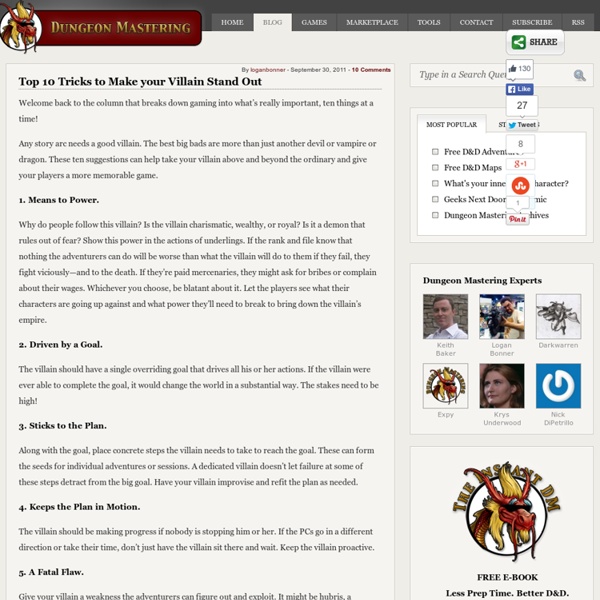 Welcome back to the column that breaks down gaming into what’s really important, ten things at a time! Any story arc needs a good villain. The best big bads are more than just another devil or vampire or dragon. These ten suggestions can help take your villain above and beyond the ordinary and give your players a more memorable game. 1. Why do people follow this villain? 2. The villain should have a single overriding goal that drives all his or her actions. 3. Along with the goal, place concrete steps the villain needs to take to reach the goal. 4. The villain should be making progress if nobody is stopping him or her. 5. Give your villain a weakness the adventurers can figure out and exploit. 6. Avoid faceless or generic threats. 7. Make the villain’s presence known in every corner of the campaign. 8. One of the best ways to make the villain’s presence known is by reusing symbols and calling cards. 9. 10. Powered By DT Author Box Written by loganbonner Rating: 4.2/5 (25 votes cast)

Personality Traits, Character traits, Human Traits, personal characteristics, human qualities, Traits of Human Consciousness, human makeup, personal attitudes, negative attitudes, positive attitudes, list, makeup of the individual human, endowments, consc Several Steps Further: Aside from the listing above, traits of human consciousness can be viewed from a number of other perspectives. Here are several: Traits Organized from Psychological (Inner-oriented) to Social (Outer-oriented) Human personality/character traits can be divided by those that are inner/psychological; and those that are outer-oriented/social. Traits Expressing in the Vertical Scale of Human Consciousness (Physical, Vital, Mental) The individual human expresses exits at three fundamental planes or levels of being -- mental, vital, and physical. ARTICLE: Positive and Negative Human Traits (from a spiritual perspective) New Fundamental Traits/Capacities that Enable Higher Achievement and Personal Growth From our research, we have determined that there are certain fundamental human traits and capacities that enable an individual to accomplish at a higher level, as well as rise in consciousness and fulfillment in life. Personal and Society's Values

RPG-SoundMixer - The new PnP RPG Experience Developing A Manipulative Character Writing Killer Fight Scenes Fight scenes are dangerous territory for writers. On the surface, they seem as if they’re guaranteed to keep the reader glued to the action in the same way as they often do at the movies. In reality, though, readers tend to skip over fight scenes – skimming the long, tedious, blow-by-blow descriptions in favour of getting back to the dialogue and character-driven drama that truly engages them in the story. My novel, Traitor’s Blade, is a swashbuckling fantasy in which fight scenes are a crucial part of the storytelling. This means having to ensure that every piece of action is vital and engaging; it means that every duel must draw the reader in and not let them go until the end. GIVEAWAY: Sebastien is excited to give away a free copy of his novel to a random commenter. Column by Sebastien de Castell, who had just finished a degree in archaeology when he started work on his first job. 1. No matter what you might think, violence is actually boring. 2. 3. 4. 5. You might also like:

Creative Writing For Dummies Cheat Sheet Rewriting and editing helps to tighten up your work. But it can be difficult – what to chop and when to stop may not be clear, and you may change your mind more than once during the process. Ask yourself whether you need to take out: Unnecessary information and explanation. Passages of dialogue that go on too long. Clunky descriptions that give too much detail. You may need to add or expand: Something you know but have forgotten to tell the reader; perhaps the age of the main character. You may need to move: Dramatic sections to make a stronger opening. In your final edit: Check for grammar, punctuation and spelling mistakes. Illustrations by Daniela Uhlig | Designerscouch #thecritiquenetwork Basic Tips To Write Better (And More Likeable) Badasses Yet another character type that is often poorly-written by amateurs, many badass characters end up becoming completely unlikeable or even despicable. Here are a few tips to keep these characters from going this route. Your character needs to be more than tough and talented. Strong, sexy, smart, skilled, and sassy are all great character traits, but on their own they're going to leave you with a character who is at best forgettable, and at worst completely unlikeable. You build a good badass the same way you build any other character type - by creating a complex, three-dimensional, nuanced character with believable emotions, fears, hopes, vulnerabilities, hobbies, quirks, etc. Stop and ask yourself: if you took away the skills and talents that make your character badass, do you think anyone would care about or want to associate with your character? Don't create an unstoppable kickass machine. Be careful that your character doesn't become an amoral/self-centered jerkass.

Writers' Workshop | Characterisation How to write convincing characters Characterisation - the task of building characters - isn't easy. But if you're struggling to build characters with real life and vigour, just follow these rules. If you do follow them correctly, we can pretty much guarantee that your characterisation will be just fine! Know what kind of character you are writing There are roughly two types of protagonist in fiction. The second type of character (rather less common, in fact) is the genuinely extraordinary character who would make things happen in an empty room. Either type of character is fine - don't struggle to equip your ordinary character with a whole lot of amazing skills, or try to 'humanise' your James Bond character by making him nice to old ladies and interested in baking. Empathy is about story and good writing Likewise, don't worry too much if your character is likeable. A) you write well enough that your reader is drawn in to your protagonist's world, whether they like it or not; and

Bug Out Bag - The 7 Types of Gear You Must Have to Survive Bug Out Bag For someone new to being a Survivalist building your first Bug Out Bag can seem like a big task. Everybody you read about has been tweaking theirs for months or even years and has a pile of gear built up. It’s hard to know where to start, but if you cover all of the basics in a survival situation you will still be much better off that 99% of the people. A Bug Out Bag, also called a BOB, I.N.C.H Bag (I’m Never Coming Home Bag),Get Out of Dodge Bag (GOOD Bag), or 72 Hour Bag is usually designed to get you out of an emergency situation and allow you to survive self-contained for up to 3 days. Here are the 7 basic types of gear you will need for your Bug Out Bag: 1. It should go without saying that water is a survival basic for any situation. 1 Liter per day per person is really the bare minimum. To expand your capability or survive longer than a couple of days you will need a water purification system. 2. Backpack Meals 3. 4. They Don’t have a ground tarp… 5. 6. 7.

How Not to Create a Villain by Anne Marble Villains aren't as important to the romance novel as the hero and heroine, but in many stories, they are crucial. The villain's actions can drive the hero and heroine to succeed against all odds, force them to make difficult decisions, even drive them apart for a while. However, romance writers walk a delicate tightrope when creating villains. Even if you aren't writing romantic suspense novels, your story might still need a villain. Why should you work so hard on your villains? There are some common mistakes many romance writers make when creating villains. Villains Who Take Over the Novel. Another thing that can detract from the main story line is the infamous "villain sex scene." Obvious Villains. If you're having trouble with this, read the novels of Agatha Christie and other famous mystery writers to learn how to fool the readers while playing fairly. Clichéd Villains. Villains with Unbelievable Motivations. Unnecessary Villains. Utterly Evil Villains. Anne M.

Cheat Sheets for Writing Body Language Translate emotions into written body language We are always told to use body language in our writing. Sometimes, it's easier said than written. I decided to create these cheat sheets to help you show a character's state of mind. The Top Five Tips For Using Body Language Use body language to add depth to dialogue. If you want to learn how to write a book, join our Writers Write course in Johannesburg. Even if you're not busy with a book, prompts are an excellent way to exercise the writing muscle. If you enjoyed this post, read: