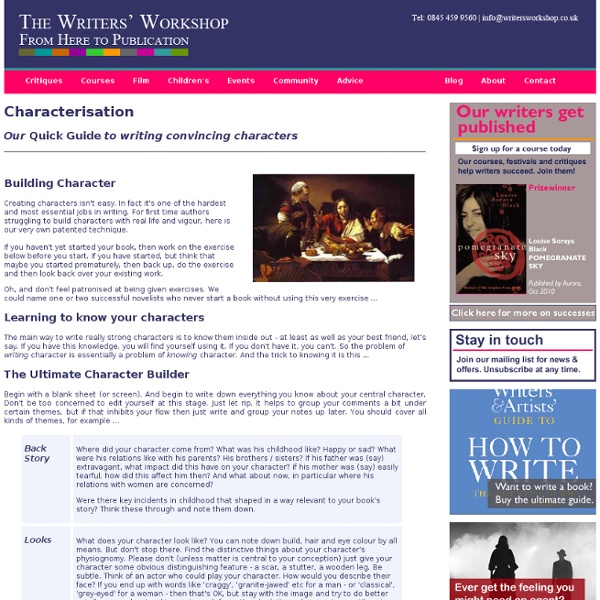 How to write convincing characters Characterisation - the task of building characters - isn't easy. But if you're struggling to build characters with real life and vigour, here is our very own patented technique. If you haven't yet started your book, then work on the exercise below before you start. Oh, and don't feel patronised at being given exercises. Learning to know your characters Strong characterisation is based on knowledge. The Ultimate Character Builder Begin with a blank sheet (or screen). You should aim to cover at least five pages with this exercise. The less central a character is to your book, the less you need to know him/her. And the exercise will work. Checking your work Once you've got a fair way into your writing (say 5 to 10,000 words), then look back at it. Even genre fiction needs swiftly drawn, believable characters. That's the bad news.

The Mysterious Plain of Jars Often referred to as â€œan Asian version of Stonehengeâ€, the Plain of Jars is one of the most enigmatic sights on Earth. Shrouded in mystery and myth, this ancient place has fascinated archeologists and scientists ever since its discovery. [Photo Credits] Thousands of giant stone jars scattered around the Xieng Khouang plain, in Laos form one of the most bizarre archeological collections in history. [Photo Credits] More than 400 sites have been discovered around the Plain of Jars, but only three of them have been opened to the public. [Photo Credits] But if you ask the locals, theyâ€™ll tell you of an old race of giants who once lived in these lands. [Photo Credits] Though there arenâ€™t many roads leading to the Plain of Jars, and tourist numbers are still at a minimum, man still managed to exert his destructive influence over this place. [Photo Credits] Perhaps one day, people will be able to access this mystic place more easily, and discover the legacy of an ancient civilization.

English 50 Exercises for Story Writers English 50 – Intro to Creative Writing: Exercises for Story Writers Basic Theory: What is a short story? Short stories have a narrator; that is, someone tells the story; have at least one character in them; have some action occur (or perhaps fails to occur); take place somewhere; that is, there is a setting for the action; and someone either learns something or fails to learn something (theme).With these five characteristics in mind, we can create an almost endless supply of exercises to help sharpen our techniques of story telling. Narrative Voice Twenty or so years ago, voice was the "rite of passage" into a successful writing career. Nevertheless, a narrative voice that sounds like it could be anyone's voice or is bland and boring, or riddled with pointless clichés will fail to capture and hold the reader's attention. NOTE: It is quite common for writers in the early stages of their careers to imitate the writers they are reading or admire most. The T.S. Go back to the previous page?

Positive Psychology Resources, Happiness, Tips and Techniques Active and Constructive Responding Shelly Gable, assistant Professor of Psychology at the University of California, has examined the different types of responses we give to other people's good news. How do you respond when people share good news with you? The manner in which you respond when others share triumph with you directly builds or undermines your relationships. Research into couples and intimate relationships suggests that supporting partners when good things happen is as important in building a relationship as supporting when bad things happen. You can learn how to build relationships by focusing on good news through a technique called ? The quadrants above utilise four possible ways to respond to someone? Important Note:When giving an active and constructive response you do not need to overdo the praise and positive feedback.

36 Writing Essays by Chuck Palahniuk 1: Establishing Your Authority Chuck teaches two principal methods for building a narrative voice your readers will believe in. Discover the Heart Method and the Head Method and how to employ each to greatest effect. 2: Developing a Theme At the core of Minimalism is focusing any piece of writing to support one or two major themes. 3: Using “On-The-Body” Physical Sensation Great writing must reach both the mind and the heart of your reader, but to effectively suspend reality in favor of the fictional world, you must communicate on a physical level, as well. 4: Submerging the “I” First-person narration, for all its immediacy and power, becomes a liability if your reader can't identify with your narrator. 5: Nuts and Bolts: Hiding a Gun Sometimes called "plants and payoffs" in the language of screenwriters, Hiding a Gun is an essential skill to the writer's arsenal that university writing courses almost never touch upon. 6: Nuts and Bolts: “Thought” Verbs 8: Nuts and Bolts: Using Choruses

Creative Writing Ideas, Courses Online, Free Classes for Writers New Year's Resolution Reading List: 9 Essential Books on Reading and Writing by Maria Popova Dancing with the absurdity of life, or what symbolism has to do with the osmosis of trash and treasure. Hardly anything does one’s mental, spiritual, and creative health more good than resolving to read more and write better. Today’s reading list addresses these parallel aspirations. And since the number of books written about reading and writing likely far exceeds the reading capacity of a single human lifetime, this omnibus couldn’t be — shouldn’t be — an exhaustive list. If anyone can make grammar fun, it’s Maira Kalman — The Elements of Style Illustrated marries Kalman’s signature whimsy with Strunk and White’s indispensable style guide to create an instant classic. The original Elements of Style was published in 1919 in-house at Cornell University for teaching use and reprinted in 1959 to become cultural canon, and Kalman’s inimitable version is one of our 10 favorite masterpieces of graphic nonfiction. On the itch of writing, Lamott banters: On why we read and write:

The List Blog Since the beginning of time, humanity has been faced with a collection of mysterious and strange events. Many separate examples of unexplained viruses, geological occurrences, crimes, and tragedies have shaped modern history. The field of scientific experimentation and criminology are based around new discoveries and uncovering the truth. As we move into 2011, the world has been plagued with some mysterious occurrences surrounding natural life and climate stability on Earth. This article will be examining ten bizarre mysteries that have been impacting life. Some of the examples look at current events, while others document the past. 10. The Watergate scandal was a 1970s United States political event. The National Personnel Records Center (NPRC) was created in 1956 as the result of a series of mergers. Millions of records were on loan to the NPRC at the time of the fire. The exact cause of the fire was never fully determined. 9. 8. 7. 6. 5. 4. 3. 2.