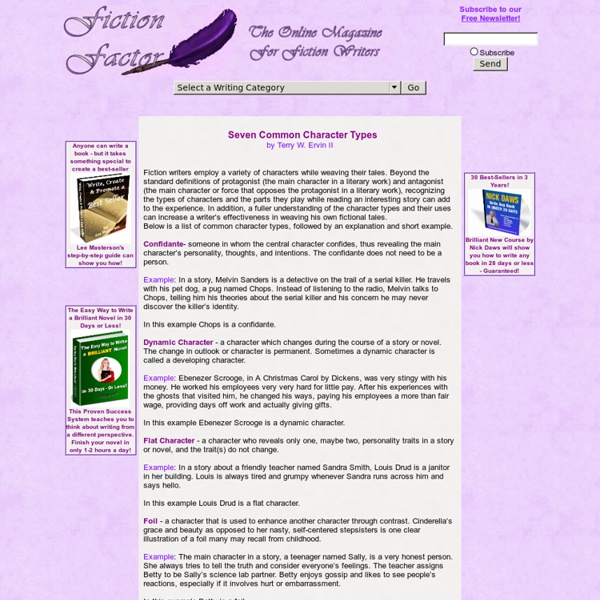 Seven Common Character Types by Terry W. Ervin II Fiction writers employ a variety of characters while weaving their tales. Beyond the standard definitions of protagonist (the main character in a literary work) and antagonist (the main character or force that opposes the protagonist in a literary work), recognizing the types of characters and the parts they play while reading an interesting story can add to the experience. In addition, a fuller understanding of the character types and their uses can increase a writer’s effectiveness in weaving his own fictional tales. Below is a list of common character types, followed by an explanation and short example. Confidante- someone in whom the central character confides, thus revealing the main character’s personality, thoughts, and intentions. Example: In a story, Melvin Sanders is a detective on the trail of a serial killer. In this example Chops is a confidante. In this example Ebenezer Scrooge is a dynamic character. Copyright © Terry W.

So You Wanna Write/Play A Powerful/Talented Character That Probably Won't Be Perceived As A Mary Sue? Many, many, many times I've seen people complain that they can't write or play powerful characters without these characters being labelled as Mary Sues. I really have only one thing to say to this: it's probably either because your characters are Mary Sues, or because you're presenting your character the wrong way. Sure it's not the former? Okay, then let's get on to how you can present your character so people probably won't grab the torches and pitchforks. This article is largely intended for fan characters, though most of it applies to other character types as well.

Handling a Cast of Thousands - Part I: Getting to Know Your Characters by Will Greenway Few writing challenges are greater than doing justice to a large cast of characters in a novel or story. In fact, the difference between simply doing them justice and handling them well is a significant level of effort in itself. Sadly, this is one of those writer conundrums that is often best resolved with a "Don't do that if it hurts" solution. If having too many characters is causing a headache -- then don't have so many characters! The Universal Mary Sue Litmus Test Stuck with a case of massive writer's block? Has your muse gone on indefinite hiatus? Or are you just bored? Types of Characters in Fiction Round character, flat character, stock character, protagonist . . . the types of characters in fiction goes on and on. What do you need to know about each one as you study literature or learn to write it? Find out with the list below. Ready to get started working on characterization, creating your own round characters? These questions can help.

Common, Yet Terrible Character Descriptors - And How To Fix Them When asked to describe their characters, many people tend to use the same over-generalized descriptors over and over. The result tends to be what I call a "Forer profile" - it's so vague that it can fit any number of characters - all of whom are wildly different - equally well. And when the same character description could fit a sneaky trickster as it could a determined soldier as it could a grad student opening a florist's shop, that's a problem. So, I'm going to outline how to give more and better information on your character to give people a better idea of what sort of person they're reading about. For the sake of simplicity, we'll go with "animals" for most of this particular section. Question is, what do you mean by "animals," and how does your character relate to them?

Questionnaires for Writing Character Profiles - Creative Writing Help Enter your e-mail to get the e-book for FREE. We'll also keep you informed about interesting website news. "I have searched the web and used different worksheets, but none have come close to your worksheets and descriptions of (what to do and what not to do). Both courses I have taken have with Creative Writing Now have been amazing. Each time I have learned something new. The one thing I love, you take everything apart and give examples." - Katlen Skye

10 Days of Character Building: Wrap Up Character Bio Sheets A bio sheet is a way of keeping track of a character’s physical description, traits and attributes. This method is familiar to anyone who enjoys role playing games such as Dungeons and Dragons. Character Chart for Fiction Writers - EpiGuide.com If you're a fiction writer -- whether you're working on a novel, short story, screenplay, television series, play, web series, webserial, or blog-based fiction -- your characters should come alive for your reader or audience. The highly detailed chart below will help writers develop fictional characters who are believable, captivating, and unique. Print this page to complete the form for each main character you create. IMPORTANT: Note that all fields are optional and should be used simply as a guide; character charts should inspire you to think about your character in new ways, rather than constrain your writing. Fill in only as much info as you choose. Have fun getting to know your character!

How to Write a Horror Story: 12 steps Adjunct Assistant Professor of English This article was co-authored by Christopher Taylor, PhD. Christopher Taylor is an Adjunct Assistant Professor of English at Austin Community College in Texas. He received his PhD in English Literature and Medieval Studies from the University of Texas at Austin in 2014. Co-authors: 169