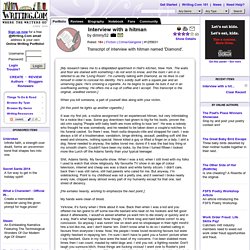 The walls and floor are stained with something I do not wish to know, and the room I am in is referred to as the 'Living Room'. I'm currently talking with Diamond, as he likes to call himself in order to conceal his identity. He's solidly built with a square jaw and an unnerving gaze. He's smoking a cigarette. As he begins to speak he buts it out in an overflowing ashtray. When you kill someone, a part of yourself dies along with your victim. PSYCHRPH. The smiling god from asgard, GUIDE TO ROLEPLAYING A VEGETARIAN Contrary to... Lmao. Once Upon a Roleplay. Nutty Natter Chatter: Script Reader Gripes: #3 Why aren't we writing disabled characters?

This is a blog post I have been meaning to write for some time.

How to play a disabled character - Cantr II Wiki. First of all, Cantr has seen a lot of quirky characters. 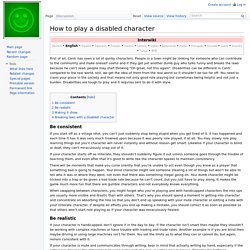 People in a town might be looking for someone who can contribute to the community and make oneself useful and if they get yet another dumb guy who talks funny and breaks the laws because he can't read, people may start thinking "Oh great, not this again". Disabilities can be different in Cantr compared to the real world, still, we get the idea of them from the real world so it shouldn't be too far off. You need to claim your place in the society and that means not only good role playing but sometimes being helpful and not just a burden. Disabilities are tough to play and it requires skill to do it with style.

Combating Stereotypes: Why Movies About 'the Disabled' Stink. Article Highlights: Author Michael Murphy is frustrated by the shallow portrayal of people with disabilities in movies and books, and encourages writers and artists to shape the film and literary markets by creating their own multidimensional characters. 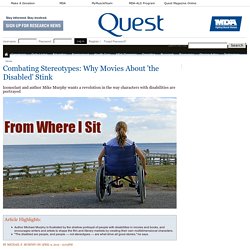 "The disabled are people, and people — not stereotypes — are what drive all good stories," he says. On the handling of disabled characters. I'm probably not covering everything here. 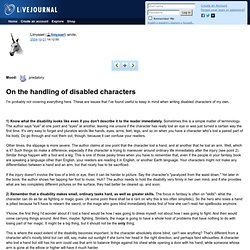 These are issues that I've found useful to keep in mind when writing disabled characters of my own. 1) Know what the disability looks like even if you don't describe it to the reader immediately. Sometimes this is a simple matter of terminology. The author says "eye" at one point and "eyes" at another, leaving me unsure if the character has really lost an eye or was just turned a certain way the first time.

It's very easy to forget and pluralize words like hands, eyes, arms, feet, legs, and so on when you have a character who's lost a paired part of his body. Writing About Disability. By Stephanie Green Copyright © 2008 by Stephanie Green, All Rights Reserved. 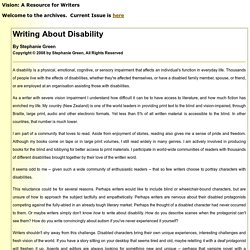 Writing Realistic Disabled Characters. Throughout my live, I’ve known and befriended a number of people who were physically, mentally, or psychologically disabled, so it makes sense that I’ve written a few disabled characters into my novels. 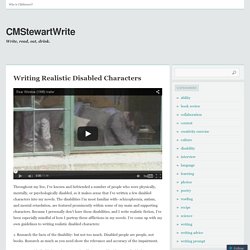 The disabilities I’m most familiar with- schizophrenia, autism, and mental retardation, are featured prominently within some of my main and supporting characters. Because I personally don’t have these disabilities, and I write realistic fiction, I’ve been especially mindful of how I portray these afflictions in my novels. I’ve come up with my own guidelines to writing realistic disabled characters: 1. Research the facts of the disability- but not too much. 2. 3. 4. Welcome to Fuck Yeah Character Development.

Writing My First Wheelchair Bound Character Has Been Enlightening. It's something I've avoided for years, now. 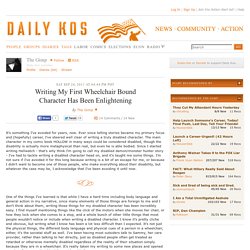 Ever since telling stories became my primary focus and (hopefully) career, I've steered well clear of writing a truly disabled character. The main character in my comic book HOLLOW in many ways could be considered disabled, though the disability is actually more metaphysical than real, but even he is able bodied. The Transcontinental Disability Choir: Four Ways To Do It Right. This post contains minor spoilers for West Wing, Joan of Arcadia, Girls with Slingshots, and the first Twilight movie. 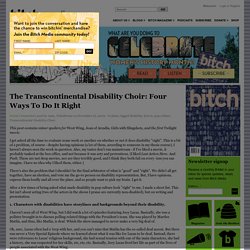 I get asked all the time to evaluate some work or another on whether or not it does disability "right". This is a bit of a problem, of course - despite having opinions (a lot of them, according to someone in my thesis course), I haven't always seen the work in question. Also, my tastes don't run mainstream - if I've liked a movie, it probably tanked at the box office, and not because it was arty and pretentious. (I liked Last Action Hero. And Push. Great Characters With Disabilities In YA and MG : Guest Post by Sarah Heacox. Today we welcome Sarah Heacox, an aspiring MG and YA author from Los Angeles. 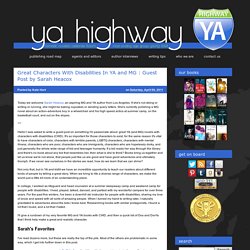 If she's not skiing or writing or running, she might be baking cupcakes or sending query letters. YA Misfits: Writing Club Wednesday: Writing Characters with a Disability. Hello m’lovelies! A while ago I hijacked the YAMF blog and talked about writing diverse characters. If you know me a little, it won't surprise you that I'm about to add another yay!

Welcome to Fuck Yeah Character Development. Kj bloggar om autism och första världskriget. Here to help? bitch, i might be. Janessahelps.tumblr. L'enfer, c'est les autres. Keir Reviews — The word muteness is used as an umbrella term to... Ask away ☆ Keir Reviews — Alice in Wonderland Syndrome is a neurological... ON HIATUS. What Is the Difference Between a Psychopath and a Sociopath? Sociopath vs. Psychopath, Differences Between Psychopathic & Sociopathic Personality Disorders. The differences between sociopathy & psychopathy are still debated, however they are primarily differentiated by the origin of the disorder. In general sociopath and psychopath are very often used to describe the same thing. In the mental health sphere the general opinion is that psychopathy is actually much more of an inborn phenomenon whilst sociopathy, which displays clinical presentation alike to psychopathy, is the consequence of environmental stressors.

Clinicians which feel that the syndrome is brought by solely by social forces & early experiences favor the term sociopath; while those that believe that psychological, biological and genetic components too contribute to the development of the condition usually use the name psychopath. David T. Lykken believed that psychopaths are born having temperamental distinctions that cause the behavior of risk seeking, impulsiveness, fearlessness as well as inability to socialize in an ordinary manner. Psychopathic Writings: Psychopaths And Sociopaths Differences - Why? What is the Difference between Psychopaths and Sociopaths?

Why make a distinction between the two? The word Sociopath is often used as synonymous for Psychopath. Using the two terms in this way works okay for the most part but has considerable limitations, the greatest of which is that it obscures the fact that despite the two groups clearly have many things in common at a superficial social level, there are fundamental differences which sometimes make us as different as night and day... or, to put it more correctly: As different as are the two points in time '1 min. Psychopathic Writings. How Psychopaths View Their World. How Psychopaths View Their World Most psychopaths are very arrogant and cocky. However, when charming a potential victim, they say all the "right" things and make you believe they are kind-hearted souls; not always, but often enough. The truth is, psychopaths are not altruistic and do not really care about friendships or ties.

Guggenbuhl-Craig states that they are very talented at appearing much more humble than the average person, but are hardly so. Some are also able to feign concern about the lower classes and profess that they are on the side of the underdog, the poor, and so forth. The psychopath is filled with greed inside, relating to the world through power, even though, as I said, on the outside he can claim to be on the side of the disenfranchised or the downtrodden.