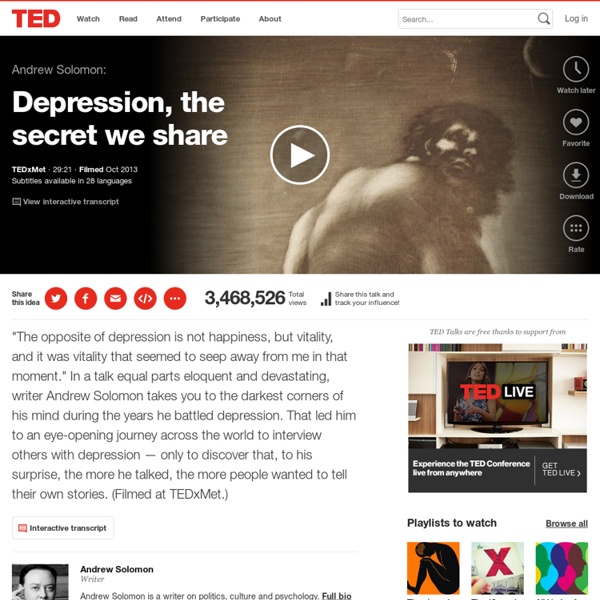 Andrew Solomon: Depression, the secret we share "The opposite of depression is not happiness, but vitality, and it was vitality that seemed to seep away from me in that moment." In a talk equal parts eloquent and devastating, writer Andrew Solomon takes you to the darkest corners of his mind during the years he battled depression. That led him to an eye-opening journey across the world to interview others with depression — only to discover that, to his surprise, the more he talked, the more people wanted to tell their own stories. (Filmed at TEDxMet.) This talk was presented to a local audience at TEDxMet, an independent event.

Alice Goffman: How we're priming some kids for college — and others for prison Close Help with subtitles Desktop / laptop users: please make sure you have the most updated versions of your browser and Flash player, and that Flash is enabled when you visit TED.com. iOS users: to access subtitles, start playing the video, then tap the speech bubble icon that appears in the bottom row of video controls. Android users: although Android devices do not support subtitles, you can download the TED app from the Google Play store. Jack Green: GB hurdler on depression & the American dream By Tom Reynolds BBC Sport "I am a runner. I have depression. I still believe I can be the best in the world."

Fatal Distraction: Forgetting a Child in the Backseat of a Car Is a Horrifying Mistake. Is It a Crime? The defendant was an immense man, well over 300 pounds, but in the gravity of his sorrow and shame he seemed larger still. He hunched forward in the sturdy wooden armchair that barely contained him, sobbing softly into tissue after tissue, a leg bouncing nervously under the table. In the first pew of spectators sat his wife, looking stricken, absently twisting her wedding band. The room was a sepulcher. Witnesses spoke softly of events so painful that many lost their composure. When a hospital emergency room nurse described how the defendant had behaved after the police first brought him in, she wept.

7 Body Language Tricks To Make Anyone Instantly Like You There’s no question that body language is important. And, according to Leil Lowndes in her book “How To Talk To Anyone,” you can capture — and hold — anyone’s attention without even saying a word. We’ve selected the best body language techniques from the book and shared them below: Teenage depression - Family Lives If your teenager is showing signs of depression, you may find yourself wondering whether it's 'just a phase' or something more serious. On average, three young people in every classroom are affected by mental health problems like depression. Many go undiagnosed and never get the help they need. Mental health problems cause more early deaths than either heart disease or cancer.

The Science of Sleep: Dreaming, Depression, and How REM Sleep Regulates Negative Emotions by Maria Popova “Memory is never a precise duplicate of the original… it is a continuing act of creation. Dream images are the product of that creation.” For the past half-century, sleep researcher Rosalind D. Cartwright has produced some of the most compelling and influential work in the field, enlisting modern science in revising and expanding the theories of Jung and Freud about the role of sleep and dreams in our lives. In The Twenty-four Hour Mind: The Role of Sleep and Dreaming in Our Emotional Lives (public library), Cartwright offers an absorbing history of sleep research, at once revealing how far we’ve come in understanding this vital third of our lives and how much still remains outside our grasp.

Tips for Keeping a Gratitude Journal Psychology researchers aren’t necessarily Thanksgiving experts—they may not know how to make fluffy stuffing, say, or beat the traffic to your in-laws’ house—but they have become a fount of wisdom on thanksgiving (with a small “t”). Over the past decade, they’ve not only identified the great social, psychological, and physical health benefits that come from giving thanks; they’ve zeroed in on some concrete practices that help us reap those benefits. And perhaps the most popular practice is to keep a “gratitude journal.” As we’ve reported many times over the years, studies have traced a range of impressive benefits to the simple act of writing down the things for which we’re grateful—benefits including better sleep, fewer symptoms of illness, and more happiness among adults and kids alike. We’ve even launched our own digital gratitude journal, Thnx4.org, here on Greater Good.

Can prison be a place of redemption? In 1991, Shaka Senghor shot and killed a man. Yes, his is a story of atonement and rehabilitation — but it didn’t always look like things would go that way. As he says in his TED Talk, for many of his 19 years in prison, he was bitter, angry and unwilling to take responsibility for his actions. Thanks to family and mentors, Senghor did turn his life around, and he now acts as a mentor and coach to at-risk youth. He knows first-hand the value of a justice system that can rehabilitate people who might otherwise be discarded. In this long, thoughtful conversation, Senghor talks to Daniel Reisel, a London-based doctor who studies the neuroscience of restorative justice – including the treatment of criminal psychopaths, often considered impossible to rehabilitate.

Why you really should keep a journal, no matter how cheesy that sounds If you've spent any significant time reading books or articles on the "science of happiness", you'll have encountered what I've long thought of as the Cheesiness Problem. It's an inescapable fact that some of the most thoroughly evidence-backed techniques for enhancing one's mood are also the most excruciatingly embarrassing – the sorts of things that those of us who imagine ourselves to be rational, sceptical types would never dream of confessing to. This is awkward, since (as I've written before) it means having to choose between maintaining a pose of sardonic detachment or doing what actually works.

Everything from Solomon should be watched. by robinmoisson Jul 19