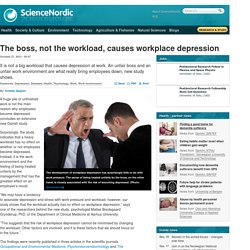 The sense of being treated unfairly by the boss, on the other hand, is closely associated with the risk of becoming depressed. (Photo: Shutterstock) A huge pile of unfinished work is not the main reason why employees become depressed, concludes an extensive new Danish study. Surprisingly, the study indicates that a heavy workload has no effect on whether or not employees become depressed. Instead, it is the work environment and the feeling of being treated unfairly by the management that has the greatest effect on an employee’s mood. 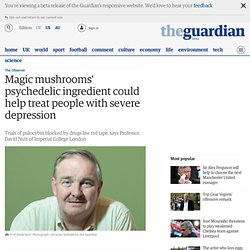 Scientists believe the chemical psilocybin, the psychedelic ingredient in magic mushrooms, can turn down parts of the brain that are overactive in severely depressive patients. The drug appears to stop patients dwelling on themselves and their own perceived inadequacies. However, a bid by British scientists to carry out trials of psilocybin on patients in order to assess its full medical potential has been blocked by red tape relating to Britain's strict drugs laws. IAm Dr. Robin Carhart-Harris from Imperial College London I study the use of MDMA & Psilocybin mushrooms in the treatment of depression." AMA : IAmA.

Depression has become leading cause of disability burden amongst US and Canadian teens : Spoonful of Medicine. The recent tragedy in Newtown, Connecticut, perpetrated by 20 year-old Adam Lanza, has intensified the discussion about how mental health is handled and documented in the US. 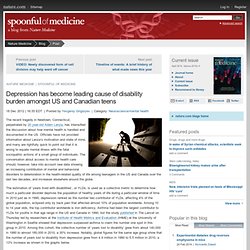 Officials have not provided information about Lanza’s motivation and state of mind, and many are rightfully quick to point out that it is wrong to equate mental illness with the fatal sociopathic actions of a small group of individuals. The conversation about access to mental health care should, however, take into account new data showing an increasing contribution of mental and behavioral disorders to deterioration in the health-related quality of life among teenagers in the US and Canada over the last two decades, and increases elsewhere around the globe. The estimation of ‘years lived with disabilities’, or YLDs, is used as a collective metric to determine how much a particular disorder deprives the population of healthy years of life during a particular window of time. Ketamine. August 16, 2010 People with treatment-resistant bipolar disorder were relieved from the symptoms of depression in as little as 40 minutes after an intravenous dose of the anesthetic medication ketamine. 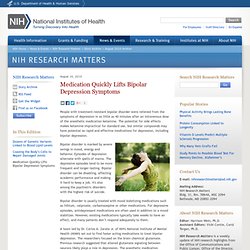 The potential for side effects makes ketamine impractical for standard use, but similar compounds may have potential as rapid and effective medications for depression, including bipolar depression. Bipolar disorder is marked by severe swings in mood, energy and behavior. Episodes of depression alternate with spells of mania. The depressive episodes tend to be more frequent and longer-lasting. Bipolar disorder is usually treated with mood stabilizing medications such as lithium, valproate, carbamazepine or other medications. A team led by Dr. For the new study, the team enrolled 18 people with bipolar disorder who had been unsuccessfully treated with at least one antidepressant medication and a mood stabilizer. Closing in on Ketamine Therapy. (dailyRx News) Relief from symptoms of major depression can be hard to find. 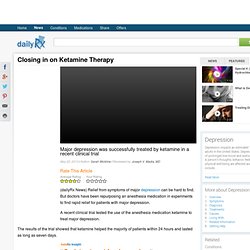 But doctors have been repurposing an anesthesia medication in experiments to find rapid relief for patients with major depression. A recent clinical trial tested the use of the anesthesia medication ketamine to treat major depression. The results of the trial showed that ketamine helped the majority of patients within 24 hours and lasted as long as seven days. "Seek treatment for depression. " Dan Iosifescu, MD, associate professor of psychiatry, and James Murrough, MD, assistant professor of psychiatry, at the Icahn School of Medicine at Mount Sinai, led a clinical trial to investigate the use of ketamine in patients with major depressive disorder.

Ketamine is most often used for anesthesia in humans and animals. Treating major depressive disorder can be difficult, as antidepressant medications can take several weeks to take effect. No trial funding information was made available to the public. Study identifies which bipolar patients will respond to ketamine therapy for depression, pain. Researchers have discovered how to determine which bipolar patients will benefit from Ketamine, a treatment commonly used for depression and pain relief, according to a study presented at the ANESTHESIOLOGY™ 2013 annual meeting. 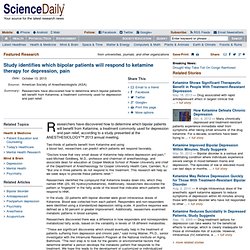 Two-thirds of patients benefit from Ketamine and using a blood test, researchers can predict which patients will respond favorably. "Doctors know that very small doses of Ketamine help relieve depression and pain," said Michael Goldberg, M.D., professor and chairman of anesthesiology, and associate dean for education at Cooper Medical School of Rowan University and chief of the Department of Anesthesiology for Cooper University Health Care, Camden, N.J. "But one in three patients do not respond to this treatment. This research will help as we seek ways to provide these patients relief. " Researchers identified the compound that Ketamine breaks down into, which they named HNK (2S, 6S hydroxynorketamine). GLYX-13, a NMDA receptor glycine-sit... [Neuropsychopharmacology. 2013. Electrical patch found to reduce depression.