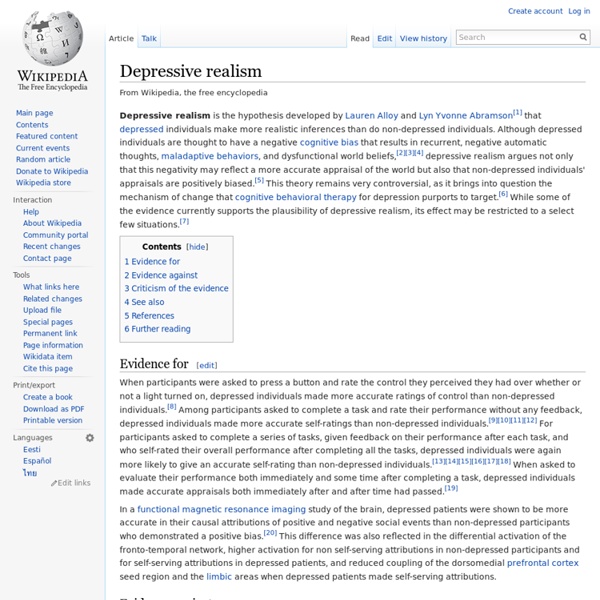 Evidence for[edit] Evidence against[edit] When asked to rate both their performance and the performance of another, non-depressed individuals demonstrated positive bias when rating themselves but no bias when rating others. Criticism of the evidence[edit] Some have argued that the evidence is not more conclusive because there is no standard for "reality," the diagnoses are dubious, and the results may not apply to the real world.[33] Because many studies rely on self-report of depressive symptoms, the diagnosis of depression in these studies may not be valid as self-reports are known to often be biased, necessitating the use of other objective measures. Due to most of these studies using designs that do not necessarily approximate real-world phenomena, the external validity of the depressive realism hypothesis is unclear. See also[edit] References[edit] Jump up ^ Alloy,L.B., Abramson,L.Y. (1988). Further reading[edit] Rachel Adelson (April 2005).

Related:  Depression on our Own

Stress and Depression Stress and depression have quite the cause and effect relationship. See how they continually fuel each other and what you can do to break the cycle. Transcript: Stress and depression have quite the relationship. What is your body language saying? Narrowing the red margins of your lips is a clear sign of anger, while massaging your forehead can signal uneasiness. Brushing hair off your face is a combination of nerves and flirtationIf you nod in clusters of three, the speaker will sense your interestStuffing your hands in your pockets means you're probably hiding somethingIn a seated conversation, lifting your toes means your feelings are extra-positive (RealSimple.com) -- Every last gesture -- whether it's a tilt of the head or plain fidgeting -- tells a story.

Neuroticism Emotional stability[edit] At the opposite end of the spectrum, individuals who score low in neuroticism are more emotionally stable and less reactive to stress. They tend to be calm, even-tempered, and less likely to feel tense or rattled. Although they are low in negative emotion, they are not necessarily high on positive emotion. Cause of depression still eludes us, says neuroscientist We don't know what is wrong with the brains in people suffering from depression. On theory is that depression is connected to the amount of the neurotransmitter serotonin inside our brains. (Photo: Colourbox) Albert Gjedde, MD, is a neuroscientist and probes people's heads to see how their brains work.

Pattern recognition Pattern recognition algorithms generally aim to provide a reasonable answer for all possible inputs and to perform "most likely" matching of the inputs, taking into account their statistical variation. This is opposed to pattern matching algorithms, which look for exact matches in the input with pre-existing patterns. A common example of a pattern-matching algorithm is regular expression matching, which looks for patterns of a given sort in textual data and is included in the search capabilities of many text editors and word processors. Clairvius Narcisse Clairvius Narcisse (born c. 1922) is a Haitian man said to have been turned into a living zombie by a combination of drugs. After investigating reports of "zombies" (including Narcisse and a handful of others), researchers believed that Narcisse received a dose of chemical mixture containing tetrodotoxin (pufferfish venom) and bufotoxin (toad venom) to induce a coma which mimicked the appearance of death. He was then allowed to return to his home where he collapsed, "died", and was buried.

Child Who Just Lost Balloon Begins Lifelong Battle With Depression SAN DIEGO—Shortly after losing grip of a helium-filled balloon and watching it float into the air above the San Diego Zoo Tuesday, local child Caleb Tremont, 3, reportedly began a battle with chronic depression that will last for the rest of his life. Before Tremont even realized what was happening, sources confirmed the balloon’s ribbon slipped from his hand, drifting up and out of reach and etching into his memory an image that years later will come to represent the overwhelming despair at the core of his life-defining mental illness. “No, the balloon,” said Tremont, who as an adult will work with his physician and several psychiatrists to find a suitable combination of anxiolytic and psychotropic medicines to quell the disease’s debilitating symptoms, ultimately turning into an over-medicated and unresponsive husk. “It’s flying away.” “Come back,” added the toddler who will never feel entirely happy or normal again.

How to Detect Lies - body language, reactions, speech patterns Interesting Info -> Lying Index -> How to Detect Lies Become a Human Lie Detector (Part 1) Warning: sometimes ignorance is bliss. After gaining this knowledge, you may be hurt when it is obvious that someone is lying to you.