Tchaikovsky’s Surprising Wisdom for Artists with Depression. By Lori Chandler The relationship between creativity and depression entails a lengthy history, as so many of those who have been labeled “genius” were (and continue to be) plagued by bouts of sorrow, grief, and self-hatred. 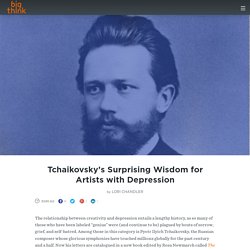 Among those in this category is Pyotr Ilyich Tchaikovsky, the Russian composer whose glorious symphonies have touched millions globally for the past century and a half. Now his letters are catalogued in a new book edited by Rosa Newmarch called The Life and Letters of Pyotr Ilyich Tchaikovsky. “There are many thorns, but the roses are there, too.” Many of Tchaikovsky's notes highlight his battle with melancholy, as he writes to his nephew, “There are days, hours, weeks, aye, and months, in which everything looks black, when I am tormented by the thought that I am forsaken, that no one cares for me.”

This give-and-take between seeing the exquisite wonder of the world beside its bleakness is a struggle not unique to Tchaikovsky and shared by many artists. Dr. The Ivy League, Mental Illness, and the Meaning of Life. The former Yale English professor William Deresiewicz stirred up quite a storm earlier this month with his New Republic essay “Don’t Send Your Kid to the Ivy League”—a damning critique of the nation’s most revered and wealthy educational institutions, and the flawed meritocracy they represent. 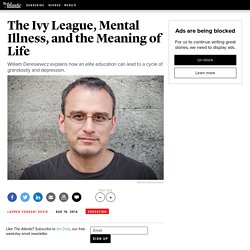 He takes these arguments even further in his upcoming book, Excellent Sheep: The Miseducation of the American Elite and the Way to a Meaningful Life. Part cultural commentary, part philosophical treatise on the meaning of education itself, the book reads like a self-help manual for ambitious yet internally adrift adolescents struggling to figure out how to navigate the college system, and ultimately their own lives.

Deresiewicz, who is also the author of A Jane Austen Education: How Six Novels Taught Me About Love, Friendship and the Things That Really Matter, spoke to me on the phone from his home in Portland, Oregon. Deresiewicz: The mental-health issues, absolutely. 5 Tools and Tips for Navigating Stress When You’re Depressed. Not surprisingly, stress can have damaging effects on depression. 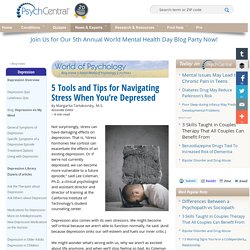 That is, “stress hormones like cortisol can exacerbate the effects of an existing depression. Or if we’re not currently depressed, we can become more vulnerable to a future episode,” said Lee Coleman, Ph.D, a clinical psychologist and assistant director and director of training at the California Institute of Technology’s student counseling center. Depression also comes with its own stressors. We might become self-critical because we aren’t able to function normally, he said. (And because depression sinks our self-esteem and fuels our inner critic.) We might wonder what’s wrong with us, why we aren’t as excited about life anymore, and when we’ll stop feeling so bad. But this doesn’t mean that your situation is hopeless. 1. Psychologist Stephanie Smith, PsyD, suggested examining everything and everyone in your life and asking yourself these questions: “How much do I enjoy this activity or person? 2. 3. 4.

Anatomy of Melancholy. The New Psychology of Depression - Download free content from Oxford University. Is Ketamine the Next Big Depression Drug? THIS IS A PREVIEW. 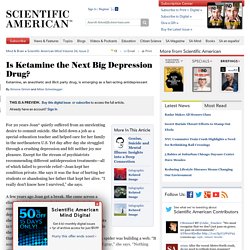 Or subscribe to access the full article. Already have an account? Sign In For 20 years Joan quietly suffered from an unrelenting desire to commit suicide. She held down a job as a special-education teacher and helped care for her family in the northeastern U.S. A few years ago Joan got a break. Why Your Depression Treatment Efforts Aren’t Working. Tackling depression or bipolar sometimes feels like an endless battle against an external invading force in your mind. 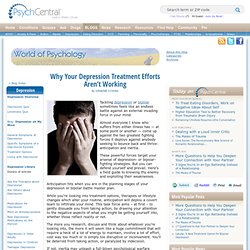 Almost everyone I know who suffers from either illness has — at some point or another — come up against the two greatest fighting forces it deploys against anybody seeking to bounce back and thrive: anticipation and inertia. These powerful forces target your arsenal of depression- or bipolar-fighting strategies. But you can defend yourself and prevail. Here’s a field guide to knowing thy enemy and exploiting their weaknesses. Anticipation hits when you are in the planning stages of your depression or bipolar battle master plan. While you’re looking into treatment options, therapies or lifestyle changes which alter your routine, anticipation will deploy a covert team to infiltrate your mind.

How to increase serotonin in the human brain without drugs. Existential Depression in Gifted Children. It has been my experience that gifted and talented persons are more likely to experience a type of depression referred to as existential depression. 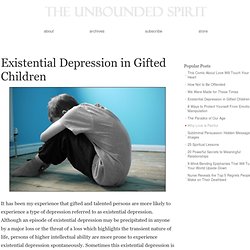 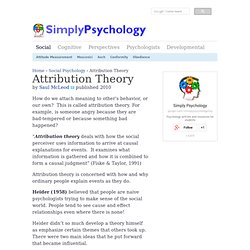 Related:  The human brain and the mind   -  Science   -  Health   -  How to increase serotonin in the human brain without drugs   -  Education   -  Enterprise