Why I train grandmothers to treat depression [ TED Talk : Dixon Chibanda ] 5 common myths about depression. There are as many people living with depression as there are citizens of the United States of America. 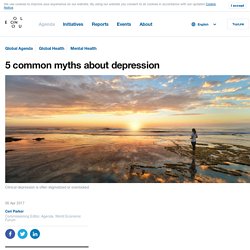 It’s the biggest cause of disability and ill health worldwide, shattering lives and sapping economies, but it is all too often stigmatized or overlooked. According to the World Health Organization, depression and anxiety cost the global economy $1 trillion as sufferers drop out of the workforce, and every dollar invested in better care would yield a return of $4. 10 Reasons Why Some People Are Vulnerable to Depression. 7 Signs It's More Than Just the Winter Blues. The Evolutionary Impulse of Depression: An Interview with Jonathan Rottenberg, PhD. It doesn’t appear that there is a single person on this planet who is not affected by depression in some way. 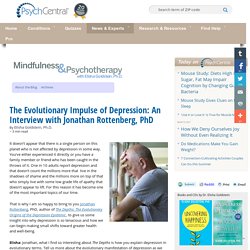 You’ve either experienced it directly or you have a family member or friend who has been caught in the throws of it. One in 10 adults report depression and that doesn’t count the millions more that live in the shadows of shame and the millions more on top of that who simply live with some low grade life of apathy that doesn’t appear to lift. For this reason it has become one of the most important topics of our time. That is why I am so happy to bring to you Jonathan Rottenberg, PhD, author of The Depths: The Evolutionary Origins of the Depression Epidemic , to give us some insight into why depression is so tenacious and how we can begin making small shifts toward greater health and well-being.

Tim Ferriss on How He Survived Suicidal Depression and His Tools for Warding Off the Darkness. Most people know Tim Ferriss as the amicable, quick-witted, high-energy writer, adventurer, and interviewer, who has devoted his life to optimizing human performance across the full spectrum of physical and mental health. 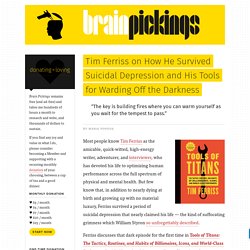 But few know that, in addition to nearly dying at birth and growing up with no material luxury, Ferriss survived a period of suicidal depression that nearly claimed his life — the kind of suffocating grimness which William Styron so unforgettably described. Reflecting on why he kept his suicidal depression a secret for many years, Ferriss distinguishes between two kinds of secrets — those we keep because we fear fleeting mortification, like accounts of embarrassing things we’ve done in sub-optimal moments, and dark secrets that paralyze us with deep shame, “the shadows we keep covered for fear of unraveling our lives.” In hindsight, it’s incredible how trivial some of it seems.

At the time, though, it was the perfect storm. 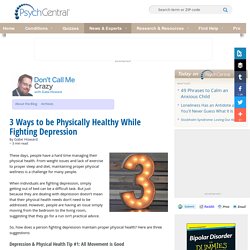 From weight issues and lack of exercise to proper sleep and diet, maintaining proper physical wellness is a challenge for many people. Meditation and Running: a Treatment for Depression. While previous studies have found that aerobic exercise and meditation can impact mental health, a study published last month in Translational Psychiatry combines the two. 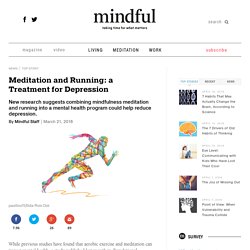 “Scientists have known for a while that both of these activities alone can help with depression,” says Tracey Shors, a professor of exercise science at Rutgers and co-author of the study. “But this study suggests that when done together, there is a striking improvement in depressive symptoms along with increases in synchronized brain activity.” The study included 52 participants—22 diagnosed with depression. For eight weeks, volunteers meditated for 30 minutes and completed 30 minutes of aerobic exercise twice a week. Researchers tested their ability to concentrate and mood before and after the eight weeks of training. The 22 participants with depression reported a 40% reduction in their symptoms. From writer Gretchen Reynolds in The New York Times: 18 Great Reminders When You’re Having a Bad Day. Email Sometimes you have to get knocked down lower than you’ve ever been to stand up taller than you ever were before. 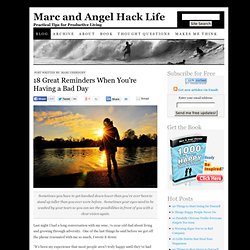 Sometimes your eyes need to be washed by your tears so you can see the possibilities in front of you with a clear vision again. Last night I had a long conversation with my wise, 71-year-old dad about living and growing through adversity. One of the last things he said before we got off the phone resonated with me so much, I wrote it down: “It’s been my experience that most people aren’t truly happy until they’ve had many reasons to be sad. Honestly, I don’t think it gets any closer to the truth than that. Not every day is good, but there is something good about every day. Ultimately, you can fight life, you can do nothing but complain about what you’re missing, or you can accept everything you have and put it together to create something worth smiling about. 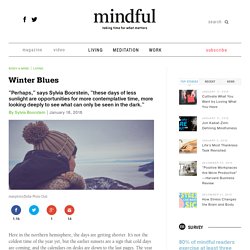 It’s not the coldest time of the year yet, but the earlier sunsets are a sign that cold days are coming, and the calendars on desks are down to the last pages. The year is dying. These are especially hard days for people whose minds are burdened with the fatigue of depression, the grief of loss, even the relatively mild Seasonal Affective Disorder (SAD) that seems directly related to the amount of daylight. Someone once said to me, “The view out the window looks like the inside of my mind. Hopeless.” So for these darkening days, here are some thoughts about varieties of mind fatigue, how psychotherapy is sometimes helpful, how meditation is sometimes helpful, how medication is sometimes helpful, how patience is always helpful. A friend of mine, a woman I’ll call Eve, began mindfulness meditation shortly before I did, twenty-five years ago. 12 Striking Photos Depicting Depression and Anxiety. We live in a time where there is simply too much to pay attention to. 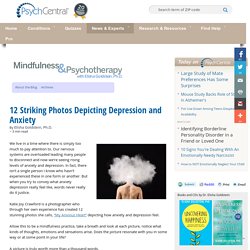 Our nervous systems are overloaded leading many people to disconnect and now we’re seeing rising levels of anxiety and depression. In fact, there isn’t a single person I know who hasn’t experienced these in one form or another. But when you try to convey what anxiety depression really feel like, words never really do it justice. Katie Joy Crawford is a photographer who through her own experience has created 12 stunning photos she calls, “My Anxious Heart” depicting how anxiety and depression feel.