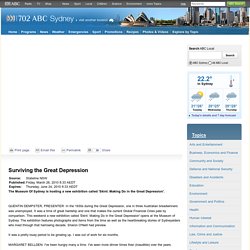 QUENTIN DEMPSTER, PRESENTER: In the 1930s during the Great Depression, one in three Australian breadwinners was unemployed. It was a time of great hardship and one that makes the current Global Financial Crisis pale by comparison. This weekend a new exhibition called 'Skint: Making Do in the Great Depression' opens at the Museum of Sydney. The exhibition features photographs and items from the time as well as the heartbreaking stories of Sydneysiders who lived through that harrowing decade.

Sharon O'Neill had preview. It was a pretty lousy period to be growing up. MARGARET BELLDEN: I've been hungry many a time. I had to go around and knock on backdoors (inaudible) and say to the people, "I haven't had nothing to eat for two or three days. " Great-depression. Depression: A time of low economic activity, distinguished from a recession by being prolonged and sustained, characterised by continuing falls in output, high and rising unemployment and companies burdened with unsold stocks because demand is low.Edna Carew, . 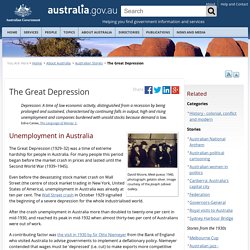 David Moore, Meat queue, 1940, photograph: gelatin silver. Image courtesy of the Joseph Lebovic Gallery. Unemployment in Australia The Great Depression (1929–32) was a time of extreme hardship for people in Australia. For many people this period began before the market crash in prices and lasted until the Second World War (1939–1945).

Even before the devastating stock market crash on Wall Street (the centre of stock market trading in New York, United States of America), unemployment in Australia was already at ten per cent. After the crash unemployment in Australia more than doubled to twenty-one per cent in mid-1930, and reached its peak in mid-1932 when almost thirty-two per cent of Australians were out of work. Social impact. The Cud On History — Looking Back On The Great Depression In Australia. Skint! Making do in the great depression. Skip to main content Mobile Menu Search form Museum of Sydney Search Block boys at St Peters Block boys at St Peters, Sam Hood, 22 April 1935. 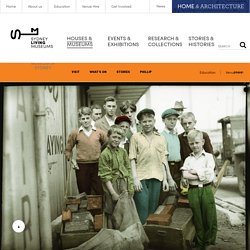 Skint! SkinT! Intro On Tuesday 29 October 1929 the Wall Street stock market in New York collapsed. Economic markets around the world were ruined. Adding to economic woes, in May 1931 the federal Labor government and six state Premiers agreed to a 20% reduction in government expenditure, cuts to wages and pensions, and increased taxation. Installation shot of the exhibition installed in the Focus gallery of the Museum of Sydney in 2010. Driven by conservative economic measures targeting debt and expenditure and shunning radical tactics that would sustain employment but drive up inflation, the Australian economy plunged into a long-lasting depression.

Jack ‘the big fella’ Lang had consistently appealed to state and federal governments to put people before money. Conservative politicians united. Aborigines day of mourning, 26 January 1938. Surviving the Great Depression. Betty Hocking My life began in the years of the Great Depression, the last in a family of nine living children. 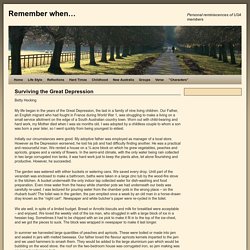 Our Father, an English migrant who had fought in France during World War 1, was struggling to make a living on a small service allotment on the edge of a South Australian country town. Worn out with child-bearing and hard work, my Mother died when I was six months old. I was adopted by a childless couple to whom a son was born a year later, so I went quickly from being youngest to eldest. Initially our circumstances were good. The garden was watered with either buckets or watering cans. Gentlemen of the road. Mel Davies I'm really going to give myself away when I say that by the middle of the Great Depression I was of remembering age. 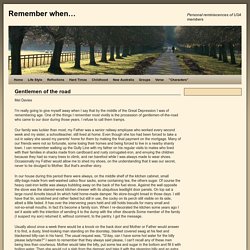 One of the things I remember most vividly is the procession of gentlemen-of-the-road who came to our door during those years. I refuse to call them tramps. Our family was luckier than most; my Father was a senior railway employee who worked every second week and my sister, a schoolteacher, still lived at home. Even though she too had been forced to take a cut in salary she saved my parents' home for them by making the final payment on the mortgage. In our house during this period there were always, on the middle shelf of the kitchen cabinet, small dilly-bags made from well-washed calico flour sacks, some containing tea, the others sugar. My first 7 years – “Dole Days.” Ron North The end of the 1920’s ushered in the long years of the Great Depression and saw our family become dependent on government food relief for the unemployed. 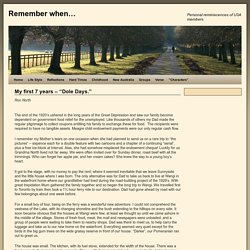 Like thousands of others my Dad made the regular pilgrimage to collect coupons entitling his family to exchange these for food. The recipients were required to have no tangible assets. Meagre child endowment payments were our only regular cash flow. I remember my Mother’s tears on one occasion when she had planned to send us on a rare trip to “the pictures” – sixpence each for a double feature with two cartoons and a chapter of a continuing “serial”, plus a free ice-block at Interval. It got to the stage, with no money to pay the rent; where it seemed inevitable that we leave Sunnyside and the little house where I was born. 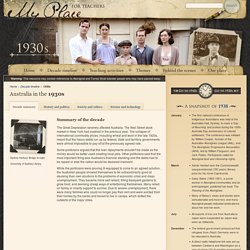 The Wall Street stock market in New York had crashed in the previous year. The collapse of international commodity prices, including wheat and wool in the late 1920s, meant that the heavy debts run up by federal, state and territory governments were almost impossible to pay off at the previously agreed rate. Some politicians argued that the loan repayments shouldn't be made as the money would be better used creating local jobs. Other politicians said that the most important thing was Australia's financial standing and the debts had to be repaid or else the nation would be declared insolvent. While the politicians were proving ill-equipped to come to an agreed solution, the Australian people showed themselves to be extraordinarily good at devising their own solutions to the problems of economic crisis and mass unemployment.