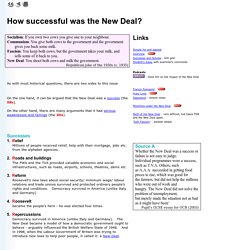 Determined Opposition (BRASS) a Businessmen hated the New Deal because it interfered with their businesses and supported workers’ rights. Rich people accused Roosevelt of betraying his class. Henry Ford hired thugs to attack his trade union workers. b Republicans hated the expenditure, which they said was wasteful (‘boondoggling’ – jobs for the sake of jobs). C Activists like Huey Long (Senator for Louisiana who started a Share the Wealth’ campaign to confiscate fortunes over $3m) and Francis Townsend (who campaigned for a pension of $200 a month) said it did not go far enough. Lesson: Choices in Weimar Republic Elections. This lesson complements the resources from Chapter 4 of Holocaust and Human Behavior to help students investigate some of the choices available to Germans in elections in the early 1930s and understand the variety of reasons many Germans supported the Nazi Party. 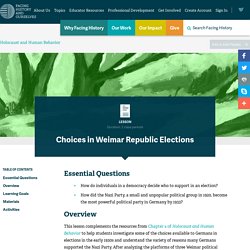 After analyzing the platforms of three Weimar political parties—the Social Democrats, the Communists, and the Nazis—students will read short biographies of several German citizens. Using details from the biographies, the party platforms, and any information they have learned before this lesson about the Weimar Republic, students will then determine which political party they believe each citizen would have supported. The citizen biographies are fictional and were created for this lesson, in part to provoke discussion and reasoned argument; determining which party each individual would have supported is not always easy, and there is no correct answer. 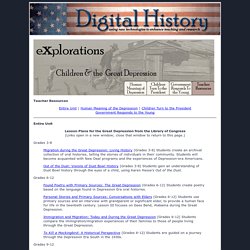 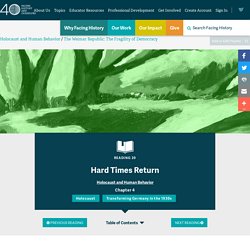 " German leaders, like their counterparts in other countries, looked for ways to end the depression. And like other leaders in 1929, they failed. The chancellor of the Weimar Republic that year was Hermann Müller, a Social Democrat. When he was unable to steer the country toward prosperity, President Paul von Hindenburg named a new chancellor a year later. This time, he chose Heinrich Brüning of the Catholic Center Party. Brüning convinced President Hindenburg to invoke Article 48 (see reading, Creating a Constitutional Government) to suspend the constitution so that the chancellor would be able to act quickly and decisively, without consulting the Reichstag, to address the severe economic crisis. To an increasing number of Germans, democracy appeared unable to cope with the economic collapse, and only the most extreme political parties seemed to offer clear solutions to the crisis. 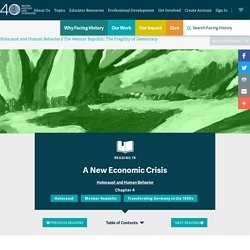 A depression is a severe economic downturn that forces businesses to decrease production and lay off workers. Germany felt the effects of the depression almost immediately. By 1932, 6 million Germans were unemployed in a nation of about 60 million people. Among them were Lea Langer Grundig, who was a Communist, and her husband, Hans. Like other job seekers, they stood in long lines at labor exchanges day after day: Lesson: The Weimar Republic: Historical Context and Decision Making. Overview To deepen your understanding of the ideas in this lesson, read Chapter 4 of Holocaust and Human Behavior. 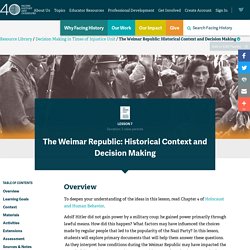 Adolf Hitler did not gain power by a military coup; he gained power primarily through lawful means. How did this happen? Nazi revision (final).59935452. Digital History. Depression-Era Photographs: Worth a Thousand Words. Activity 1. 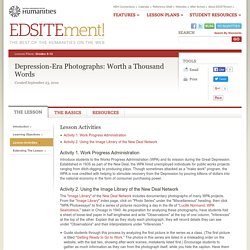 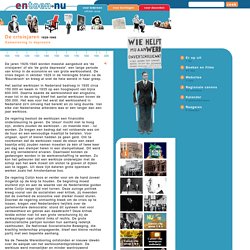 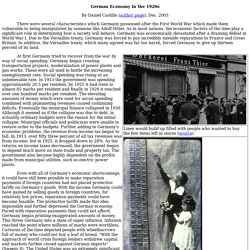 As in most nations, the economic factors of the time play a significant role in determining how a society will behave. Germany was economically devastated after a draining defeat in World War I. Due to the Versailles treaty, Germany was forced to pay incredibly sizeable reparations to France and Great Britain. At first Germany tried to recover from the war by way of social spending. Even with all of Germany's economic shortcomings, it could have still been possible to make reparation payments if foreign countries had not placed protective tariffs on Germany's goods.

With Germany at its weakest and most vulnerable point, Hitler took the opportunity to begin his ascent to power. Hitler had two significant ideas that helped launch him in to power. The impact of the Great Depression on Germany. Weimar Republic. The webserver at Alpha History tells us you’re using an adblocking tool, plug-in or browser extension on your computer or network. 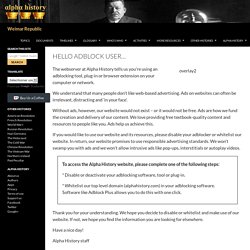 We understand that many people don’t like web-based advertising. Ads on websites can often be irrelevant, distracting and ‘in your face’. Without ads, however, our website would not exist – or it would not be free. Ads are how we fund the creation and delivery of our content. We love providing free textbook-quality content and resources to people like you.