Depression on our Own

Self-Critical People Are Raised By Parents Who Do This (M) 28 Before & After Bedroom Photos Of People Who Suffer From Depression. Striking study reveals how dietary fats enter the brain and cause depression. 'Smiling depression': it's possible to be depressed while appearing happy – here's why that's particularly dangerous. 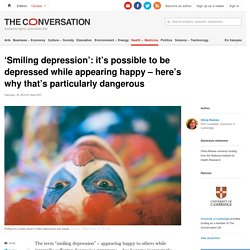 Articles on the topic have crept up in the popular literature, and the number of Google searches for the condition has increased dramatically this year. Some may question, however, whether this is actually a real, pathological condition. While smiling depression is not a technical term that psychologists use, it is certainly possible to be depressed and manage to successfully mask the symptoms. The closest technical term for this condition is “atypical depression”. 10+ Photos That Prove Depression Has No Face. September is National Suicide Prevention Month, and throughout the last few weeks, Instagram has become flooded by empowering survival stories. 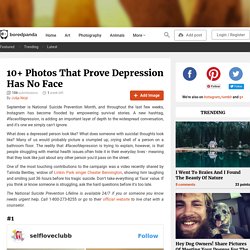 A new hashtag, #faceofdepression, is adding an important layer of depth to the widespread conversation, and it's one we simply can't ignore. Show Full Text. 'Game of Thrones' star opens up about postpartum depression - CNN. In a new interview in Net-A-Porter's The Edit, the actress opened up to co-star (and interviewer) Maise Williams about her battle with postpartum depression during Season 1 of the hit HBO series. 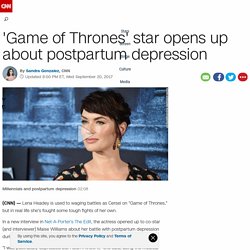 "I was postnatally depressed but I didn't know it," she said, using the medical term most often used in the U.K. "I saw a doctor for the medical check, and I just burst into tears. She said I was postnatally depressed and I went, 'Am I? Ivanka Trump reveals struggle with postpartum depression - CNN. Trump, 35, and her husband, Jared Kushner, 36, have three children: Arabella, 6, Joseph, 3, and Theodore, 1. 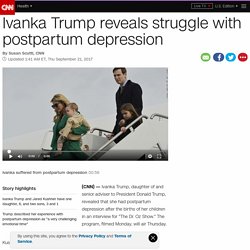 "With each of my three children, I had some level of postpartum depression," Trump said. Symptoms of the condition, which affects some women after giving birth, can include extreme sadness and anxiety. "It was a very challenging emotional time for me because I felt like I was not living up to my potential as a parent or as an entrepreneur and executive," Trump said. "I had had such easy pregnancies that in some way, the juxtaposition hit me even harder. " When host Dr. How a failed suicide affects the brain. The numerous factors that induce someone to think about suicide, the “ideators,” are often different from those who actually attempt suicide, the “attempters.” 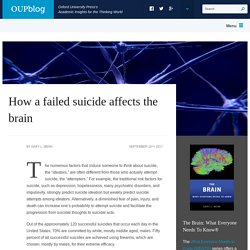 For example, the traditional risk factors for suicide, such as depression, hopelessness, many psychiatric disorders, and impulsivity, strongly predict suicide ideation but weakly predict suicide attempts among ideators. Alternatively, a diminished fear of pain, injury, and death can increase one’s probability to attempt suicide and facilitate the progression from suicidal thoughts to suicidal acts.

Out of the approximately 120 successful suicides that occur each day in the United States, 70% are committed by white, mostly middle aged, males. Depressed People Cannot Imagine This Special Thing. Around one in ten people will suffer from major depression at some point in their lives. 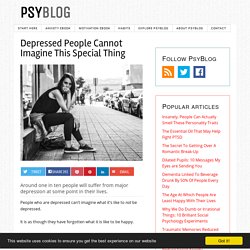 People who are depressed can’t imagine what it’s like to not be depressed. Depression Isn't A Choice, It's A Kind Of Brain Damage. After years of debate, researchers finally determined that persistent depression causes brain damage, and not the other way around. 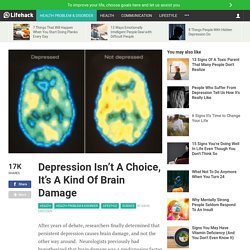 Neurologists previously had hypothesized that brain damage was a predisposing factor for chronic depression, but a new study published in Molecular Psychiatry sheds a different light. The study, which consisted of 9,000 individual samples, collected from the ENIGMA group, succeeded in definitively proving a causal relationship between persistent depression and brain damage. Magentic resonance images (MRIs) showed evidence of hippocampus shrinkage in 1,728 patients diagnosed with chronic depression compared to the 7,199 healthy individuals partaking in the study. Specifically, the study found that those patients diagnosed with major depressive disorder, “showed robust reductions in hippocampal volume (1.24%) in MDD patients compared with healthy controls.” You can read the full study here. Quality of Life in Depression Scale. It is a 34 item self rated[2] questionnaire which consists of dichotomous response questions, with the response being either True/Not True or Yes/No.[3] It is scored binomially (0-1) and high scores on the QLDS indicated a lower quality of life.[4] Development[edit] The QLDS was developed by Galen Research in 1992 and was funded by Lilly Industries.[5] It was developed in the United Kingdom. 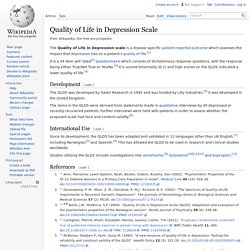 The items in the QLDS were derived from statements made in qualitative interviews by 30 depressed or recently recovered patients. Further interviews were held with patients in order to assess whether the proposed scale had face and content validity.[6] International Use[edit] Major Depression Inventory. The Major Depression Inventory (MDI) is a self-report mood questionnaire developed by the World Health Organisation. 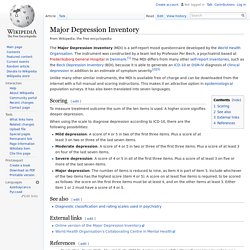 The instrument was constructed by a team led by Professor Per Bech, a psychiatrist based at Frederiksborg General Hospital in Denmark.[1] The MDI differs from many other self-report inventories, such as the Beck Depression Inventory (BDI), because it is able to generate an ICD-10 or DSM-IV diagnosis of clinical depression in addition to an estimate of symptom severity.[2][3] List of diagnostic classification and rating scales used in psychiatry. From Wikipedia, the free encyclopedia Jump to navigationJump to search The following diagnostic systems and rating scales are used in psychiatry and clinical psychology. 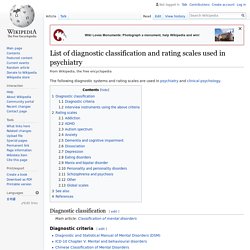 Diagnostic classification[edit] Diagnostic criteria[edit] Interview instruments using the above criteria[edit] Rating scales[edit] Beck Hopelessness Scale. The Beck Hopelessness Scale (BHS) is a 20-item self-report inventory developed by Dr. Aaron T. Beck that was designed to measure three major aspects of hopelessness: feelings about the future, loss of motivation, and expectations.[1] The test is designed for adults, age 17-80. It measures the extent of the respondent's negative attitudes, or pessimism, about the future. It may be used as an indicator of suicidal risk in depressed people who have made suicide attempts. The test is multiple choice. Beck Anxiety Inventory. The Beck Anxiety Inventory (BAI), created by Dr. Aaron T. Beck and other colleagues, is a 21-question multiple-choice self-report inventory that is used for measuring the severity of anxiety in children and adults.[1] The questions used in this measure ask about common symptoms of anxiety that the subject has had during the past week (including the day you take it) (such as numbness and tingling, sweating not due to heat, and fear of the worst happening).

Child Who Just Lost Balloon Begins Lifelong Battle With Depression. SAN DIEGO—Shortly after losing grip of a helium-filled balloon and watching it float into the air above the San Diego Zoo Tuesday, local child Caleb Tremont, 3, reportedly began a battle with chronic depression that will last for the rest of his life. Before Tremont even realized what was happening, sources confirmed the balloon’s ribbon slipped from his hand, drifting up and out of reach and etching into his memory an image that years later will come to represent the overwhelming despair at the core of his life-defining mental illness.

“No, the balloon,” said Tremont, who as an adult will work with his physician and several psychiatrists to find a suitable combination of anxiolytic and psychotropic medicines to quell the disease’s debilitating symptoms, ultimately turning into an over-medicated and unresponsive husk. “It’s flying away.” “Come back,” added the toddler who will never feel entirely happy or normal again. Stress and Depression. Stress and depression have quite the cause and effect relationship. See how they continually fuel each other and what you can do to break the cycle. Transcript: Stress and depression have quite the relationship. That's because stress increases levels of the hormone... Depressive realism.

Evidence for[edit] Evidence against[edit] When asked to rate both their performance and the performance of another, non-depressed individuals demonstrated positive bias when rating themselves but no bias when rating others. Criticism of the evidence[edit] Google Searches Show The Seasonal Trends Of Mental Illness. Cause of depression still eludes us, says neuroscientist. Four-question test ID's women with depression. Does Depression Go Away on Its Own?

Emil Kraepelin (1856-1926), who coined the term "manic depressive," found that in contrast to patients suffering from dementia praecox (schizophrenia), those suffering manic depression had a relatively good prognosis, with 60% to 70% of patients suffering only one attack and attacks lasting, on average, seven months. Modern drug trials for antidepressants seldom take into account the fact that people with depression often get better on their own. The typical randomized controlled trial (RCT) has a placebo arm and a treatment arm, but no non-placebo/non-treatment arm (otherwise known as a wait-list arm). What Is Depression? Let This Animation With A Dog Shed Light On It. 5 Reasons It's So Hard to Combat Anxiety and Depression and What You Can Do. April 2, 2014 | Blackness ever blackening: my lifetime of depression. 8-kyle.jpg (448×666) 9-cin.jpg (632×438) A Blood Test For Depression Shows The Illness Is Not A Matter Of Will.

Screening for depression might soon be as easy as a blood test. A new test that identifies particular molecules in the blood could help doctors diagnose patients with clinical depression, according to a new study published in the journal Translational Psychiatry. The blood test can also predict which therapies would be most successful for patients, and lays the groundwork for one day identifying people who are especially vulnerable to depression -- even before they’ve gone through a depressive episode. My drugged life: I’ve been on antidepressants since 10. This Is What Teen Depression Looks Like  I want you to picture a person with depression. Are you seeing the dark bedroom, filthy sweatpants, empty eyes, poor health and general lack of prosperity?

Leashing the Black Dog: My Struggle With Depression. Antidepressants Affect Feelings of Love for Partner. Leashing the Black Dog: The History of Depression. Depression Distorts People's Perception of Time, Study Finds. Are You Depressed? The Symptoms of Male Melancholy. Why Some Depressed People Hate Being Told to 'Cheer Up' A Strange Depression Symptom That Most People Don't Know. How to avoid committing suicide. Blood Test for Suicide: Changes In One Gene Predict Suicide Risk.

Signs of Depression: 10 Common Symptoms You Should Know. Can your diet make you feel depressed? Unexpected New Aspect of Depression Identified. Experiences of Depression: A Study in Phenomenology // Reviews // Notre Dame Philosophical Reviews // University of Notre Dame. Huffingtonpost. Depression Literally Colors The Way We See The World. 10 Thinking Patterns That Can Lead to Depression. The Neuroscience of Despair. The Five Myths of Self-Compassion. Depression can lead to work disability. Spring.org.