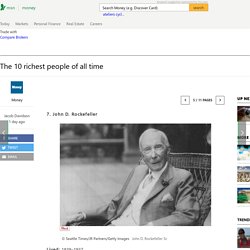 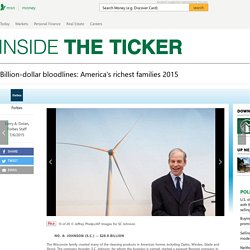 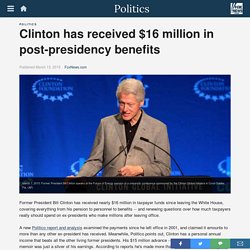 (AP) Former President Bill Clinton has received nearly $16 million in taxpayer funds since leaving the White House, covering everything from his pension to personnel to benefits -- and renewing questions over how much taxpayers really should spend on ex-presidents who make millions after leaving office. A new Politico report and analysis examined the payments since he left office in 2001, and claimed it amounts to more than any other ex-president has received. Meanwhile, Politico points out, Clinton has a personal annual income that beats all the other living former presidents.

Drought may soon yield mysterious WWII-era bomber beneath Lake Mead. The Debt Limit Explained. Richest 1% may own half of global wealth by 2016. The combined wealth of the world's richest 1 percent could overtake that of the other 99 percent by 2016 , according to a report by Oxfam published Monday, as billionaires, politicians and business leaders gather in Davos for the annual World Economic Forum. 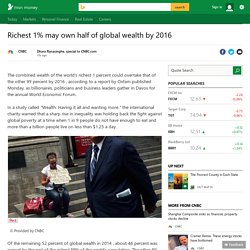 In a study called "Wealth: Having it all and wanting more. " the international charity warned that a sharp rise in inequality was holding back the fight against global poverty at a time when 1 in 9 people do not have enough to eat and more than a billion people live on less than $1.25 a day. © Provided by CNBC Of the remaining 52 percent of global wealth in 2014 , about 46 percent was owned by the rest of the richest fifth of the world's population. The other 80 percent of the world share d around 5.5 percent, according to Oxfam. Rising inequality has moved into the spotlight in recent years amid concerns that living standards have been hit by slow economic recovery in the wake of the global financial crisis. Glass–Steagall Legislation. The term Glass–Steagall Act usually refers to four provisions of the U.S. 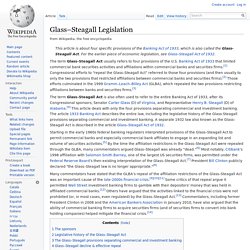 Congress could soon allow the benefits of current retirees to be cut as part of an agreement to address the fiscal distress confronting some of the nation’s 1,400 multi-employer pension plans. 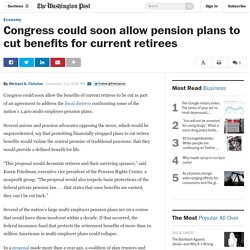 Several unions and pension advocates opposing the move, which would be unprecedented, say that permitting financially strapped plans to cut retiree benefits would violate the central promise of traditional pensions: that they would provide a defined benefit for life. How Walmart's Bosses Get Rich Off Welfare Abuse  Forget about the guy at the grocery store using food stamps to buy lobster. 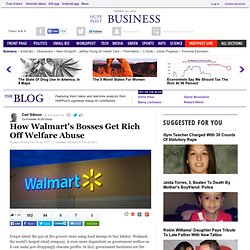 Walmart, the world's largest retail company, is even more dependent on government welfare so it can make jaw-droppingly obscene profits. In fact, government handouts are the main reason Walmart is so profitable, and the billion-dollar corporation's business model is centered around the continued dependence on social safety net programs. Walmart's welfare abuse is costing taxpayers billions of dollars per year. It's time to get them off the government teat and make them start paying their own way. Paying Workers Poverty Wages When Walmart pays its workers so little that they need food stamps to survive, they're also investing in a steady profit stream. Employee wages are so low that during the last holiday season, one Walmart in Ohio held a food drive for its own employees so they could have a decent Thanksgiving dinner.

Excessively Compensating Executives This article originally appeared on Reader Supported News. The Pay Gap Is Much Wider Than Most Americans Think: Study. 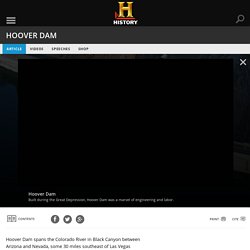 Roosevelt dedicated Boulder Dam. (Twelve years later, the dam would be renamed for Hoover in honor of his efforts on behalf of the project.) At 726 feet (221 m) high–twice the height of the Statue of Liberty–and 1,244 feet (379 m) long, the dam weighs more than 6.6 million tons. At its base, where the maximum water pressure is 45,000 pounds per square foot, are huge generators that could produce up to 3 million horsepower and provide electricity for three states. REA. CCC. Crash of 2000's. Current Economic Recovery Plan. PA New Deal Magazine Article PDF.