Social Media Raises Risk of Depression in Young Adults: Study. The more young adults log onto Facebook and other social media, the more likely they are to be depressed, says a new study from the University of Pittsburgh School of Medicine. 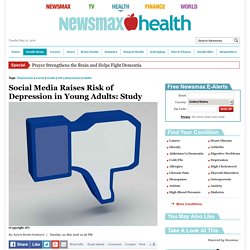 The study, which will be published in the journal Depression and Anxiety, is the first large study of social media and depression. In 2014, senior author Brian A. Primack, M.D., Ph.D., and his colleagues studied questionnaires from 1,787 American adults ages 19 through 32. Social Networking Among Teens Can Lead to ‘Facebook Depression’

A study released today by The American Academy of Pediatrics (AAP) on the impact of social media on children, adolescents and families, cites that ‘Facebook depression’ is one of the risk factors that teens may face with overexposure to social media. 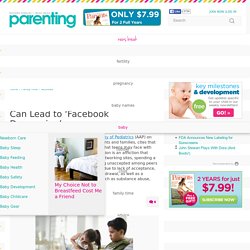 Facebook depression is an affliction that results from establishing a presence on social networking sites, spending a great deal of time on these sites and then feeling unaccepted among peers online. Similar to depression in the offline world due to lack of acceptance, Facebook depression can cause anxiety and withdrawal, as well as a propensity towards engaging in risky activities such as substance abuse, unsafe sex or self-destructive behaviors. The study found that the interaction these teens have on social networking sites is on the rise with 22% of teenagers logging onto their favorite social networking sites more than 10 times a day. There are many things parents can do to help mitigate these risks. How does social media cause depression? - Quora.

Cyberbullying on Social Media Linked to Teen Depression. Cyberbullying on social media is linked to depression in teenagers, according to new research that analyzed multiple studies of the online phenomenon. 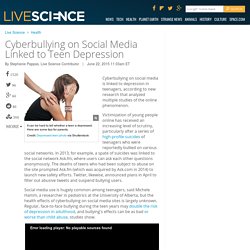 Victimization of young people online has received an increasing level of scrutiny, particularly after a series of high-profile suicides of teenagers who were reportedly bullied on various social networks. In 2013, for example, a spate of suicides was linked to the social network Ask.fm, where users can ask each other questions anonymously. The deaths of teens who had been subject to abuse on the site prompted Ask.fm (which was acquired by Ask.com in 2014) to launch new safety efforts. Twitter, likewise, announced plans in April to filter out abusive tweets and suspend bullying users. How Social Media Affects Our Self-Perception. Not long ago, a friend of mine deleted her Instagram account. 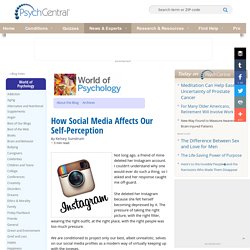 I couldn’t understand why one would ever do such a thing, so I asked and her response caught me off-guard. She deleted her Instagram because she felt herself becoming depressed by it. The pressure of taking the right picture, with the right filter, wearing the right outfit, at the right place, with the right people was too much pressure. We are conditioned to project only our best, albeit unrealistic, selves on our social media profiles as a modern way of virtually keeping up with the Joneses. Regardless of whether you realize it, you’re spending a great deal of time and effort on the creation of your digital identity.

Enter ‘smiling depression.’ Smiling depression is a term used to describe people who are depressed but do not appear so. If you were to meet me for the first time, you would be very surprised to learn I have major depression. Each of us carries what Robert Firestone termed the critical inner voice. Social Media Overload - What's social media depression. Think you might have the social media blues? 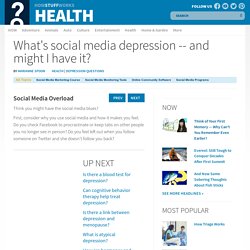 First, consider why you use social media and how it makes you feel. Do you check Facebook to procrastinate or keep tabs on other people you no longer see in person? Do you feel left out when you follow someone on Twitter and she doesn't follow you back? These are a few examples of how social media can alter your mood. It's likely that social media can also play a role in people living with depression. It's also true that self-esteem, pre-existing depressive thoughts and social anxiety are tied into the equation [sources: Wilson et al.].

Teen depression and how social media can help or hurt - CNN. According to a recent study in the journal JAMA Pediatrics, 23% of teens report they are or have been the target of cyberbullying. 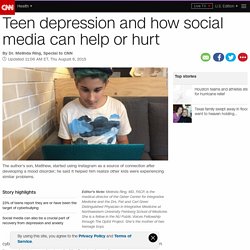 Another 15% admitted to bullying someone else online. The researchers' review of 10 studies that explored the link between social media victimization and depression all showed -- without exception-- a significant correlation. Yes, cyberbullying undeniably can inflict serious wounds. But from my own family's personal experience, along with research, allowing a teen access to social media can also be a crucial part of recovery from depression and anxiety. According to the National Institute of Mental Health, in 2012, an estimated 2.2 million adolescents, or 9.1% of the U.S. teen population (ages 12 to 17), had at least one major depressive episode in the past year.

A national survey of over 10,000 adolescents showed that almost 1 in 3 teens met criteria for an anxiety disorder. On Tumblr, a search for depression pops up a page asking: "Everything okay?