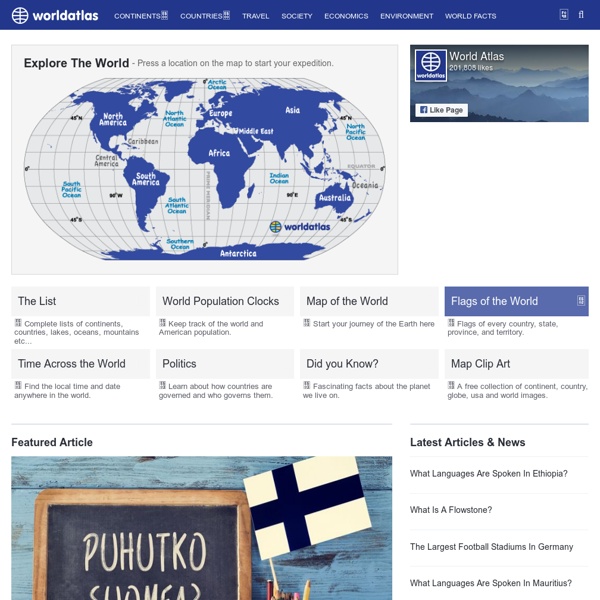 Flags of the World Flags of every country, state, province, and territory. Time Across the World Find the local time and date anywhere in the world. Travel Aids Free travel aids to help you make sense of your travels.

World Heritage List #: As for 19 Natural and Mixed Properties inscribed for geological values before 1994, criteria numbering of this property has changed. See Decision 30.COM 8D.1 The World Factbook People from nearly every country share information with CIA, and new individuals contact us daily. If you have information you think might interest CIA due to our foreign intelligence collection mission, there are many ways to reach us. If you know of an imminent threat to a location inside the U.S., immediately contact your local law enforcement or FBI Field Office. World Population Clock: 7.5 Billion People World Population: Past, Present, and Future (move and expand the bar at the bottom of the chart to navigate through time) The chart above illustrates how world population has changed throughout history. View the full tabulated data. At the dawn of agriculture, about 8000 B.C., the population of the world was approximately 5 million. Over the 8,000-year period up to 1 A.D. it grew to 200 million (some estimate 300 million or even 600, suggesting how imprecise population estimates of early historical periods can be), with a growth rate of under 0.05% per year.

How a Scene List Can Change Your Novel-Writing Life By the end of this post you will have a nagging urge to use an excel spreadsheet. Don’t make that face—I know you’re a writer and not a data analyst. Or if you are a data analyst—I get that you’re on this blog to get away from your day job. But guess what? ClipArt ETC: Free Educational Illustrations for Classroom Use Alphabets The Alphabets ClipArt collection offers 1,193 illustrations arranged in 43 galleries including decorative letters and numerals, complete alphabet sets, and several sign language systems. If you are looking… American History and Government The American History and Government ClipArt collection offers 2,513 illustrations arranged in 26 galleries. The images range from exploration and Colonial America, to the American Revolution and Civil…

7 Good Examples of Gamification in Education About ETR Community EdTechReview (ETR) is a community of and for everyone involved in education technology to connect and collaborate both online and offline to discover, learn, utilize and share about the best ways technology can improve learning, teaching, and leading in the 21st century. EdTechReview spreads awareness on education technology and its role in 21st century education through best research and practices of using technology in education, and by facilitating events, training, professional development, and consultation in its adoption and implementation.

Animation: Population Pyramids of the 10 Most Populous Countries China and India may have similar populations today, but they have very different demographic destinies. While China should see its population fall in the coming decades, India projects to be the most populous country in 2050 by a long shot. By that time, India will have up to 1.7 billion people – and Mumbai will be the largest megacity in the world with upwards of 42 million people. Comparing Population Pyramids English 50 Exercises for Story Writers English 50 – Intro to Creative Writing: Exercises for Story Writers Basic Theory: What is a short story? As soon as someone delivers a definition, some good writer will write a story that proves the theory wrong. About the only thing we can say for sure is that short stories are short and that they are written in what we call prose.

Ideas for adapting group lessons to working on Zoom As has happened in much of Europe, Poland has now closed schools, universities and other places where people might gather in the hope of reducing the spread of coronavirus. Our school had its last normal lessons on Wednesday, with Thursday and Friday dedicated to training our teachers how to use Zoom. We start teaching on Monday 16th, so my total experience with Zoom so far has been in the training process.

The Characteristics of Good Writing Posted by Melissa Donovan on November 21, 2013 · What’s the difference between bad and good writing? How important is it for a writer to be able to discern the difference between good writing and bad writing? Pretty important, if you ask me. A Collection of Some of The Essential Educational Web Tools for Teachers July 29, 2015 We spent sometime during the last weekend sifting through our archive of educational tools we covered in the past and decided to bring to the forefront the titles below.The aim of this multi-purpose collection is to provide teachers with a handy resource where they can access some of the best educational tools to leverage in their instruction. This list is a work-in progress and we will be adding more to it in the next coming days. Tools for creating instructional videos and tutorials

Animation: How the Demographics of China and India are Diverging Within popular discourse, especially in the West, the profiles of China and India have become inextricably linked. Aside from their massive populations and geographical proximity in Asia, the two nations also have deep cultural histories and traditions, growing amounts of influence on the world stage, and burgeoning middle classes. China and India combine to be home to one-third of the world’s megacities, and they even had identical real GDP growth rates of 6.1% in 2019, based on early estimates by the IMF. Diverging Demographics But aside from the obvious differences in their political regimes, the two populous nations have also diverged in another way: demographics. As seen in today’s animation, which comes from AnimateData and leverages data from the United Nations, the two countries are expected to have very different demographic compositions over time as their populations age.

Creating Atmosphere in Fiction By Esther Newton. Ezee Writer August 2012 To be successful, a short story or novel needs to develop a strong sense of atmosphere. This draws your readers into your story so they can imagine this world you are creating. It also sets up expectations for them and gives them information about the characters they’re likely to meet in your story. Here are some ways to help you ensure your readers feel as if they’re right there alongside your characters, experiencing the story for themselves: