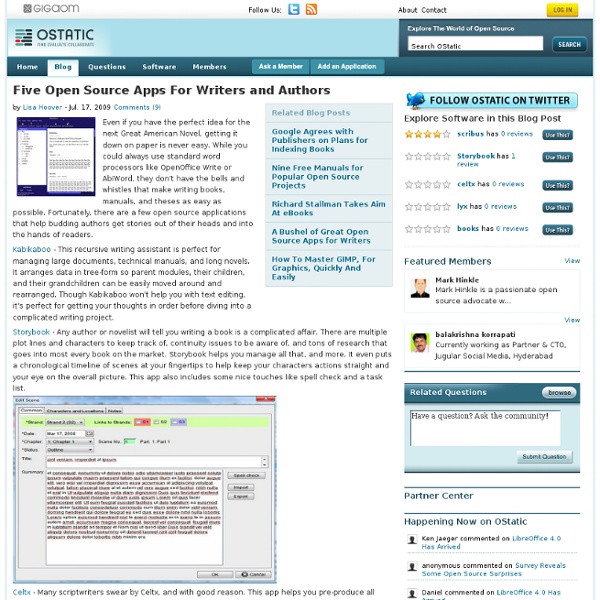 by Lisa Hoover - Jul. 17, 2009Comments (9) Even if you have the perfect idea for the next Great American Novel, getting it down on paper is never easy. While you could always use standard word processors like OpenOffice Write or AbiWord, they don't have the bells and whistles that make writing books, manuals, and theses as easy as possible. Fortunately, there are a few open source applications that help budding authors get stories out of their heads and into the hands of readers. Kabikaboo - This recursive writing assistant is perfect for managing large documents, technical manuals, and long novels. It arranges data in tree-form so parent modules, their children, and their grandchildren can be easily moved around and rearranged. Storybook - Any author or novelist will tell you writing a book is a complicated affair. Celtx - Many scriptwriters swear by Celtx, and with good reason.

7 Essential Elements of Scene + Scene Structure Exercise Today’s post is excerpted from The Plot Whisperer Workbook (Adams Media, 2012) by Martha Alderson. Two lucky commenters were chosen to receive a free copy of the book: Tanette Smith and Mindy Halleck. Congratulations! PageFour - Software for Novelists and Creative Writers - Tabbed Because it's NOT a business product. Because it doesn't dazzle you with 1001 features that you'll never use. Because you can't insert a graph, or embed a table within a table. 102 Resources for Fiction Writing « Here to Create UPDATE 1/10: Dead links removed, new links added, as well as Revision and Tools and Software sections. Are you still stuck for ideas for National Novel Writing Month? Or are you working on a novel at a more leisurely pace? Here are 102 resources on Character, Point of View, Dialogue, Plot, Conflict, Structure, Outlining, Setting, and World Building, plus some links to generate Ideas and Inspiration. Also, I recommend some resources for Revision and some online Tools and Software. Too many links?

yWriter5 - Free novel writing software to help you write a book yWriter5 is designed for Windows XP, Vista and beyond. Win98 and Win2k users should be able to use it, but those operating systems are unsupported. These downloads contain yWriter5 version 5.2.1.1, dated 04/Jul/2014 Download yWriter5 installer (2.1mb) from the primary site. James Fallows on The Personal Brain What is my purpose on Earth? Raising my children? Being as good and supportive a husband to my wife as (the movie version of) Paul Child was to Julia in the new film? Working for world peace and sustainable environmental development and a more humane society?

A quick overview of the Hero’s Journey Planning out a novel? Be sure to join my newsletter for a FREE plotting/revision roadmap, and check out the full series on plotting novels in a free PDF! Over the last two weeks, we’ve looked at two plotting methods. One helped us parse our story into parts, the other helped us grow it from an idea. But a weakness of both is that neither really tells us what kind of events we need in a story—especially in the sagging middle.

36 Writing Essays by Chuck Palahniuk 1: Establishing Your Authority Chuck teaches two principal methods for building a narrative voice your readers will believe in. Discover the Heart Method and the Head Method and how to employ each to greatest effect. 2: Developing a Theme At the core of Minimalism is focusing any piece of writing to support one or two major themes. Learn harvesting, listing, and other methods, after a fun excursion into the spooky side of Chuck's childhood.

Becoming A Writer – Seriously » About Productivity and Success go hand-in-hand. As a serious writer, you must be productive in : Writers must tap the imagination, set loose creativity, dream about one’s future, critique one’s own work and the work of others, explore the world for inspiration. Without thought, there’s no writing. James Fallows on Outlining Software While out of range for the past week, I've not weighed in on a lot of subjects I would normally have a view on, from the Nigerian would-be suicide bomber, to the nature and function of the TSA, to the implications of press and judicial developments within China, to the latest twist in China's policy on the RMB. I will plan to catch up, on each and all, in the next day or two. For the moment ... how about a promising entry from the world of "interesting" technology? What I have in mind is Thinklinkr, a free, "cloud"-based outlining program that very much deserves attention. Since the dawn of the personal computing age, outlining programs have constituted a fascinating but often heartbreaking product category.

7 Keys To Write the Perfect First Line of a Novel Earlier this week, I read “Poppies,” a short story by Ulrica Hume, one of our authors on Story Cartel. Initially, I had only planned on skimming a few pages, but the first line hooked me. Before long, I was finishing the last page.1 Great first lines have that power, the power to entice your reader enough that it would be unthinkable to set the book down. How, then, do you write the perfect first line? Free Guide: Want to become a writer?

How to Write Screenplays Using Microsoft Word: 9 steps Edit Article Edited by Moneybox35, Teresa, BW, Antarctica and 11 others Why should you pay hundreds of dollars for script writing software when you already own the most powerful program out there: Microsoft Word! We'll accomplish this through something called macros, which are programmable shortcut buttons. We will program them by recording the actions we want them to do. We will make macros for 1) Scene headings 2) Description 3) Character names 4) Dialog 5) Parenthetical.

30+ Tools For The Amateur Writer NaNoWriMo (National Novel Writing Month) is almost upon us. On November 1st, brave souls everywhere will embark on a month long endeavor to write a story of at least 50,000 words. We've gathered 30+ tools to help those folks who want to try their hand at it. Online - Thirty Tools for Writers [Author’s note: Of the many things I’ve written for the Poynter website, none has been as popular as my "Twenty Tools for Writers." This list has been quoted, cited, praised, debated, and repurposed by writers, editors, teachers, and other professionals who care about the craft. That folks find these tools useful gives me courage. So I’m adding ten more to my workbench, and sharpening up several others. As you can see, I’m very impressed with myself. Thirty writing tools requires a big workbench.

Related:  Tools • Writing
Related:  Structure   -  Generatori e altri tools   -  write already!   -  the structure of man   -  Sentence Structure   -  Just Already Yet   -  Structure   -  Structure and How To   -  Already Used   -  Taxes & Business Structure   -  Already Read - Snarry   -  Karpman drama triangle - Wikipedia, the free encyclopedia   -  Gestalt psychology - Wikipedia, the free encyclopedia   -  MSNBC - How to Think About the Mind   -  How to Make Readers Feel Emotion | The Editor's Blog   -  A quick overview of the Hero’s Journey | Jordan McCollum   -  Scene-Creation Workshop — Writing Scenes that Move Your Story Forward | Holly Lisle: Official Author Homepage   -  ReadWriteThink: Student Materials: Plot Diagram   -  Three-act structure - Wikipedia, the free encyclopedia   -  Morality Quiz/Test your Morals, Values & Ethics - YourMorals.Org   -  Holacracy | Social Technology for Purposeful Organization   -  How to Write a Synopsis of Your Novel   -  6 Writing Outline Templates and 3 Reasons to Use Them — Self Publishing Team   -  8 simple formula plot templates | The Wise Sloth   -  The 4 Story Structures that Dominate Novels   -  How to Plot a Character Driven Book in 3 Easy Steps | Robyn DeHart   -  How to Write a Script Outline | The 8 Essential Plot Points   -  What is Plot - How to Write a Story from Beginning to End   -  How to Plot a Novel With Index Cards | eHow   -  The Writers Block. Writing resources for the students at PVCC   -  How It Works | Holacracy   -  25 Unique Places to Find Story Ideas   -  Creative Writing Worksheets--The Writer's Craft   -  How to Organize and Develop Ideas for Your Novel   -  NOVA Elements on the App Store on iTunes   -  Writing Fiction: How to Structure a Killer Novel Ending   -  Genetics   -  Freytag's Pyrmaid   -  Plot Generator   -  Damn it Neil, the name is Nuwanda. | 10 Ways to Create a Plot Twist