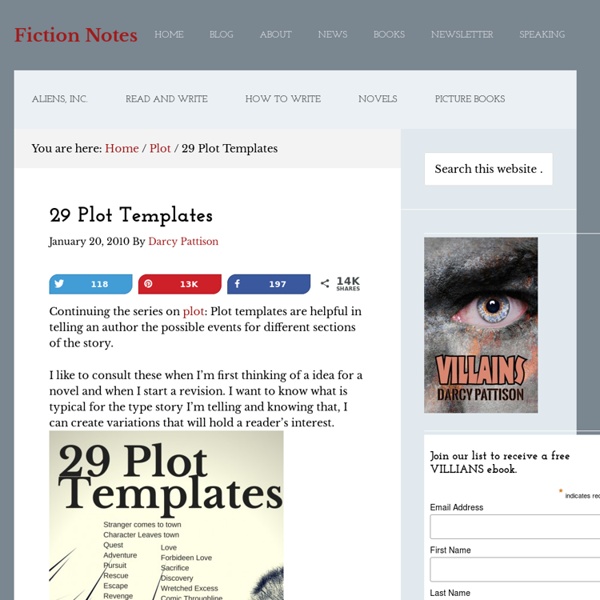 20 Essential Elements of a Bestselling Thriller, by Jodie Renner If you want your thriller or romantic suspense to be a compelling page-turner, make sure you’ve included most or all of these twenty elements: 1. A protagonist who’s both ordinary and heroic. Rather than having a “Superman” invincible-type hero, it’s more satisfying to the readers if you use a regular person who’s thrown into stressful, then increasingly harrowing situations, and must summon all of his courage, strength and inner resources to overcome the odds, save himself and other innocent people, and defeat evil. 2. The readers need to be able to warm up to your main character quickly, to start identifying with her; otherwise they won’t really care what happens to her.So no cold, selfish, arrogant characters for heroes or heroines! 3. Your antagonist needs to be as clever, strong, resourceful and determined as your protagonist, but also truly nasty, immoral and frightening. 4. 5. If it doesn’t, change your protagonist — or your story line. 6. 7. 8. 9. 10. 11. 12. 13. 14. 15. 16. 17.

How To Structure A Story: The 8 Point Arc By Ali Hale - 3 minute read One of my favourite “how to write” books is Nigel Watts’ Writing A Novel and Getting Published. My battered, torn and heavily-pencil-marked copy is a testament to how useful I’ve found it over the years. Although the cover appears to be on the verge of falling off altogether, I’ve risked opening the book once more to bring you Watts’ very useful “Eight-Point Story Arc” – a fool-proof, fail-safe and time-honoured way to structure a story. (Even if you’re a short story writer or flash fiction writer rather than a novelist, this structure still applies, so don’t be put off by the title of Watts’ book.) The eight points which Watts lists are, in order: StasisTriggerThe questSurpriseCritical choiceClimaxReversalResolution He explains that every classic plot passes through these stages and that he doesn’t tend to use them to plan a story, but instead uses the points during the writing process: So, what do the eight points mean? Stasis Trigger The quest Surprise Climax Reversal

religion in fantasy novels | helluo librorum Since no one burned my house down after the Tolkien post, I’m going out on a limb here and talk to you about using religion in your fantasy novels. Generally speaking, when building worlds in fantasy novels, the religions of your world will be a reflection of the religions here on good old planet earth. So I’m going to offer a few suggestions – take them or leave them: Know thy religion. Understand the core beliefs. Avoid stereotypes. Religions don’t kill. Treat all religions with respect. Don’t be malicious. World building is a difficult process; as a fantasy writer you are creating a whole social order, and you want it to be believable. A few articles to see: If you’re looking for a checklist of questions to ask when world building, go to the SFWA blog where Fantasy Worldbuilding Questions by Patricia C. Joe Wetzel at Inkwell Ideas has a great article with Worldbuilding: Fantasy Religion Design Guide, and a subsequent post, Worldbuilding: Fantasy Religion Design Example. Like this:

Old Plots, New Plots This turned out to be a long entry so Thriller Guy is going to break it up into two. He'll be putting the other half up in a few days. TG has spoken many times about the difficulties in coming up with great plot ideas. Oh, how many times have the Little Ones gathered at his knee and pleaded, (pled?) “Oh, TG, tell us your secret, how can we too come up with killer plot ideas?” Constant readers of TG's thoughts know that he is a big fan of Gin when it comes this question, and he ascribes to the Four Bs of Creative Cognition – that's Bed, Bath, Beach and Bus – which are great places for ideas to suddenly spring into one's head. TG reads a ton of books, and most of them are running through the same old plots, mash-ups and ripoffs. But instead of continuing to rail against the paucity of today's plots, TG is going to reprise an old plot and give you some new ones he likes over the last year's reading. Clive Cussler used to be the master of the over-the-top, bizarro plot.

The Golden Rules for a Good Plot Writing a novel can be a daunting task. Here are some helpful tips to ensure you write a good plot. Is it your dream to become a best-selling author? Have you spent countless afternoons daydreaming about selling a million copies? Plot Rule 1: Create a plot skeleton A plot outline will help you choose a complication and the steps to resolve it. Plot Rule 2: Flesh out your plot Fleshing out your plot with colorful characters and a vivid setting will enhance your novel and grab your readers’ attention. Plot Rule 3: Bring your plot to a powerful resolution Have you used each scene and story event to guide readers to a plot resolution? Plot Rule 4: End your story at a natural stopping place After the climax, wrap up the story as quickly as possible. Plot Rule 5: Make sure your characters resolve conflicts on their own Don't rely on an act of nature or an unknown hero to clean things up at the last minute. A final note on creating a good plot… Creating a good plot isn't as easy as it sounds.

Write It Sideways » Blog Archive » 5 Visual Strategies for Plotting Your Novel I don’t know about you, but for me, plotting a full-length novel is one of the most difficult aspects of writing. I tend to come up with a great premise, but turning that into a plot becomes a lot of work. I don’t usually get it right the first time, either. Personally, what works best for me during this outlining process is to have plenty of visual material on hand. If I can see the story taking shape, I can make all sorts of subconscious connections that wouldn’t otherwise surface. Here are 5 visual strategies I have used for outlining: 1. Pictures are a great way to visualize your plot, setting, and characters. You can keep either a digital file of pictures on your computer (taken yourself with a digital camera, or ones you find on the internet), or a real file with film pictures/magazine cutouts. Whichever you use, make sure you hold onto them for when you start actually writing. 2. 3. If you prefer more concrete methods of plotting to digital ones, try the good ol’ index card system.

The 39 Steps to writing a perfect thriller by author John Buchan's grandson By Toby Buchan Updated: 22:01 GMT, 15 January 2011 'The 39 Steps, in its language, its settings, its nods to contemporary technology and its characterisation, belongs firmly to the 20th century,' said John Buchan's grandson, Toby On a late-summer’s day in 1914, a man walks with his small daughter down a rickety flight of wooden steps leading to a private beach from a house on the clifftop. ‘Thirty-six, thirty-seven, thirty-eight, thirty-NINE!’ Thus Alice Buchan gave the title to her father’s, my grandfather’s, new novel, little knowing that it would prove to be one of the most enduring adventure stories ever to be published. John Buchan wrote The 39 Steps in a few weeks towards the end of 1914, while staying with his wife and children at Broadstairs in Kent, in a house on the cliffs overlooking Stone Bay. Buchan posted the manuscript to Blackwood & Sons in Edinburgh, publisher not only of books but of the famous literary magazine that bore its name. He need not have fretted.

The Best Story Structure Tool We Know By Glen C. Strathy Of the various story structure models or theories that exist, we have chosen to focus mainly on Dramatica, which was developed by Melanie Anne Phillips and Chris Huntley. We chose to work with this model because it is the only one that... 1. Addresses all aspects of story structure simultaneously and in an integrated way, including not just plot and character but also theme (something most models barely touch on). 2. 3. 4. What's more, Dramatica embodies certain insights into story structure that no other theory does. The aim of this website is to present practical tips and exercises to help writers, while avoiding a lot of theory. Finding A Roadmap For Creating Your Novel The most important thing you need from any story theory is help creating a good roadmap for your novel. Specifically, you want help creating a plot that will keep the reader engaged and bring the story to an emotionally satisfying conclusion. Traditional Story Theory Is Too General 1. 2. 3. 1. 2. 3. 4. 5.

Five Rules for Writing Thrillers - David Morrell Thrillers have never been more popular. On the New York Times fiction bestseller lists, over half are often filled with examples of the genre. Thrillers even have their own organization, International Thriller Writers (which I co-founded with Gayle Lynds). Not that thrillers were entirely absent. If you’re a writer who’s thinking of going in this direction, here are five pieces of advice that might help. NUMBER ONE: KNOW YOUR MOTIVESHave a good reason for writing a thriller. I remained sane by imagining stories in which I was a hero overcoming adversity. By contrast, if you’re merely writing thrillers because they’re currently popular, you ought to think twice. What’s more, events might prevent the book from being published. Imagine how hollow you would have felt if you’d written one of those thrillers just to pay the bills. Before I start any novel, I write a lengthy answer to the following question: “Why is this project worth a year of my life?” I love doing research.

Plot Generator 10 Steps to Finding Your Writing Voice Bonus: Need help finding your writing voice? Click here for free tips. I write only because / There is a voice within me / That will not be still.–Sylvia Plath Awhile ago, I wrote an article called, “Finding Your Blog’s Unique Voice.” Photo credit: Dan Foy (Creative Commons) But here, I want to share a little bit more about how to find your overall writing voice. Spending some time deliberating over voice is worth your attention and focus. If you struggle with getting people to read your writing or with staying consistent in your craft, you need to stop chasing numbers and productivity and reboot. An exercise for finding your voice Not sure where to start? Describe yourself in three adjectives. Why do you need a writing voice? Finding your voice is the key to getting dedicated followers and fans and that it’s the only sustainable way to write. Once you’ve found your voice, make sure you continue to develop it. The bottom line is that there’s a lot of noise out there in the world.