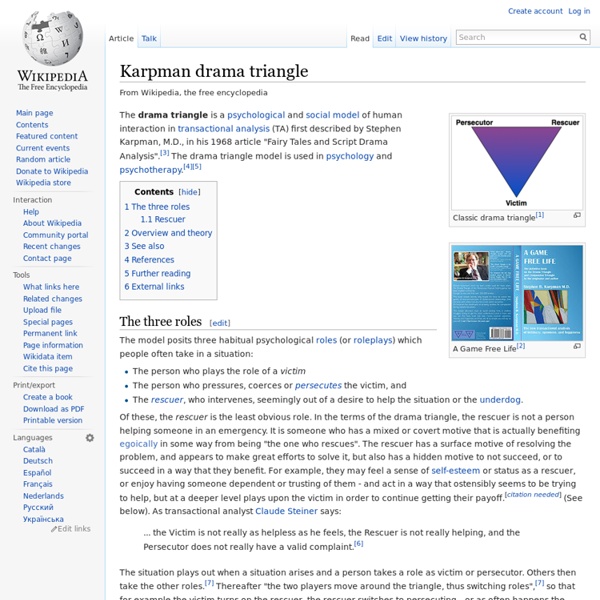 Classic drama triangle[1] The drama triangle is a psychological and social model of human interaction in transactional analysis (TA) first described by Stephen Karpman, M.D., in his 1968 article "Fairy Tales and Script Drama Analysis".[3] The drama triangle model is used in psychology and psychotherapy.[4][5] The three roles[edit] The model posits three habitual psychological roles (or roleplays) which people often take in a situation: Of these, the rescuer is the least obvious role. In the terms of the drama triangle, the rescuer is not a person helping someone in an emergency. ... the Victim is not really as helpless as he feels, the Rescuer is not really helping, and the Persecutor does not really have a valid complaint.[6] The situation plays out when a situation arises and a person takes a role as victim or persecutor. Melodrama often features a central, triangle cast. Rescuer[edit] Overview and theory[edit] Three quantitative variables are often useful to consider for games: Related:  Stories Structure • Structure

hero's journey "A Practical Guide to Joseph Cambell’s The Hero with a Thousand Faces" by Christopher Vogler © 1985 “There are only two or three human stories, and they go on repeating themselves as fiercely as if they had never happened before.” In the long run, one of the most influential books of the 20th century may turn out to be Joseph Campbell’s THE HERO WITH A THOUSAND FACES. The book and the ideas in it are having a major impact on writing and story-telling, but above all on movie-making. Filmmakers like John Boorman, George Miller, Steven Spielberg, George Lucas, and Francis Coppola owe their successes in part to the ageless patterns that Joseph Campbell identifies in the book. The ideas Campbell presents in this and other books are an excellent set of analytical tools. With them you can almost always determine what’s wrong with a story that’s floundering; and you can find a better solution almost any story problem by examining the pattern laid out in the book. There’s nothing new in the book.

Three-act structure Three- act structure Plot Line Graph by Wendell Wellman The three-act structure is a model used in writing, including screenwriting, and in evaluating modern storytelling that divides a fictional narrative into three parts, often called the Setup, the Confrontation and the Resolution. Structure[edit] The second act, also referred to as "rising action", typically depicts the protagonist's attempt to resolve the problem initiated by the first turning point, only to find him- or herself in ever worsening situations. Interpretations[edit] In Writing Drama, French writer and director Yves Lavandier shows a slightly different approach.[2] He maintains that every human action, whether fictitious or real, contains three logical parts: before the action, during the action, and after the action. SJ Murray, a documentary film maker, feature film writer, and professor at Baylor University, explores why the three act structure matters in her book, Three Act What? See also[edit] References[edit]

John Medina Jo-ha-kyū Jo-ha-kyū (序破急?) is a concept of modulation and movement applied in a wide variety of traditional Japanese arts. Roughly translated to "beginning, break, rapid", it essentially means that all actions or efforts should begin slowly, speed up, and then end swiftly. This concept is applied to elements of the Japanese tea ceremony, to kendō and other martial arts, to dramatic structure in the traditional theatre, and to the traditional collaborative linked verse forms renga and renku (haikai no renga). The concept originated in gagaku court music, specifically in the ways in which elements of the music could be distinguished and described. Though eventually incorporated into a number of disciplines, it was most famously adapted, and thoroughly analysed and discussed by the great Noh playwright Zeami,[1] who viewed it as a universal concept applying to the patterns of movement of all things. Theatre[edit] Poetry[edit] See also[edit] References[edit] Jump up ^ Zeami.

When to Discard the Three-Act Story Structure There are times to follow the rules of story, and there are times to break the rules. When should you use the three-act story structure, and when should you discard it entirely? Story Structure in Ken Follett’s Century Trilogy I’ve finally gotten around to finishing Ken Follett’s Century Trilogy with Edge of Eternity, and hoo boy, there is a lot that happens in that book. One could argue that there’s a lot that happens in all three books, given that they cover a one-hundred-year timespan, but the final installment felt much fuller than the other two. For some reason, it felt like the third book had more climactic peaks than the previous two, even though history has always been a series of events happening simultaneously in multiple locations. What made the book feel so different might have had something to do with its rejection of the classic literary structure, the three-act story structure. Can You Really Discard the Three-Act Structure? Sure, why not? Have fun!

Innovation Day Created by an Australian software company called Atlassian, FedEx Day is a day of autonomy where employees are allowed to work on anything they are interested in (as long as it has nothing to do with their job). It is coined FedEx Day because these employees are expected to DELIVER a project overnight to share what they have learned. (Google has a Google 20%) What purpose does this serve? FedEx Day is motivating! From the kids themselves... Can this same concept be transferred to the classroom? Absolutely! Teachers guide students in developing higher level questions based on their interests. During Innovation Day, teachers will facilitate, coach, question and guide. The final step in our Innovation Day will be the presentation of projects. Our Goal for the First Innovation Day We are hoping to involve a classroom from each of the upper elementary schools in the SAU as well as an 8th grade pod at CMS. How will we grade and evaluate the work? We won’t! Where could this lead?