6 Writing Outline Templates and 3 Reasons to Use Them 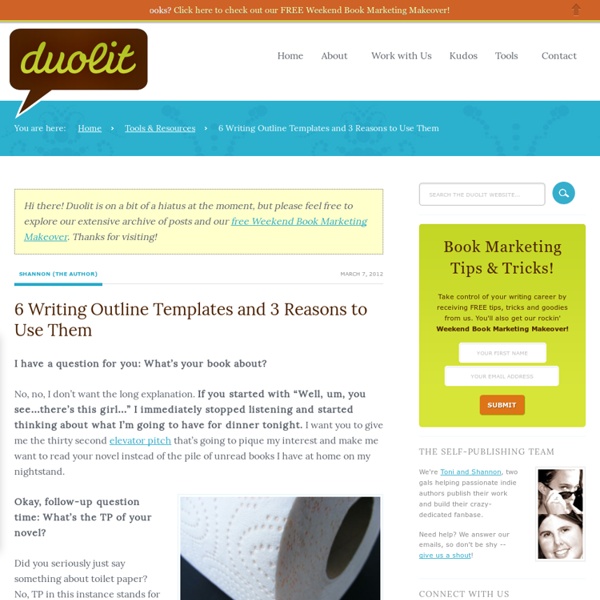 I have a question for you: What’s your book about? No, no, I don’t want the long explanation. If you started with “Well, um, you see…there’s this girl…” I immediately stopped listening and started thinking about what I’m going to have for dinner tonight. I want you to give me the thirty second elevator pitch that’s going to pique my interest and make me want to read your novel instead of the pile of unread books I have at home on my nightstand. Okay, follow-up question time: What’s the TP of your novel? Did you seriously just say something about toilet paper? Alright, final question: What happens at the end? I know you’re giving away all your secrets, but you can share with me. Right? If you stumbled through your answers to the questions above, I’d like to introduce you to our newest set of helpful Duolit tools. Still unsure why you should take the time to fill these out? 1. 2. 3. The Basic Plot Outline « Download Basic Outline [PDF] » photo by orcmid The Detailed Plot Outline The Freytag Model

Plotting With Michael Hague's Six Stage Plot Structure By Janice Hardy, @Janice_Hardy So far we've discussed the Three-Act Structure, the Hero’s Journey, and the Save the Cat Beat Sheet. That leaves one more popular structure--Michael Hague's Six Stage Plot Structure. (Side note, if you ever get an opportunity to sit in on one of Hague's workshops, I highly recommend them.) This structure is a great choice for those who want a minimal amount of outlining. Extra tip: It's also a solid template for writing a synopsis when you're getting ready to submit your manuscript. Act One: First 25% Like every other act one so far, this starts out with the protagonist being who he is and getting an opportunity to act. 0-10% - Stage One: The Setup: The protagonist is fully in his identity. 10% Mark - Turning Point One: Opportunity: Something happens that provides an opportunity for the protagonist to act, and this will lead him to what will ultimately make him happy and complete. Act Two: 25-75% 75-100% - Act Three And there you have it.

WriteWorld How to Write a Memoir - William Zinsser Essays - Spring 2006 Print Be yourself, speak freely, and think small By William Zinsser One of the saddest sentences I know is “I wish I had asked my mother about that.” Or my father. Writers are the custodians of memory, and that’s what you must become if you want to leave some kind of record of your life and of the family you were born into. My father, a businessman with no literary pretensions, wrote two family histories in his old age. When my father finished writing his histories he had them typed, mimeographed, and bound in a plastic cover. What my father did strikes me as a model for a family history that doesn’t aspire to be anything more; the idea of having it published wouldn’t have occurred to him. My father’s two histories have steadily grown on me. Above all, there’s the matter of voice. When you write your own family history, don’t try to be a “writer.” I wrote about her once, many years ago, in a memoir for a book called Five Boyhoods. Finally, it’s your story.

Zombieland Story; 102 Resources for Fiction Writing « Here to Create UPDATE 1/10: Dead links removed, new links added, as well as Revision and Tools and Software sections. Are you still stuck for ideas for National Novel Writing Month? Or are you working on a novel at a more leisurely pace? 10 Days of Character Building Name Generators Name Playground The Universal Mary Sue Litmus Test Priming the idea pump (A character checklist shamlessly lifted from acting) How to Create a Character Seven Common Character Types Handling a Cast of Thousands – Part I: Getting to Know Your Characters It’s Not What They Say . . . Establishing the Right Point of View: How to Avoid “Stepping Out of Character” How to Start Writing in the Third Person Web Resources for Developing Characters What are the Sixteen Master Archetypes? Character: A compilation of guidance from classical and contemporary experts on creating great dramatic characters Building Fictional Characters Fiction Writer’s Character Chart Character Building Workshop Tips for Characterization Fiction Writer’s Character Chart

Fill in the Blanks: A Plot Template to Keep you on Target By Janice Hardy, @Janice_Hardy Last week I shared some great plotting tips from Southpark creators Trey Parker and Matt Stone. I've been using them myself as I revise, but I couldn't stop thinking of other ways to apply this technique. I was also thinking about something a commenter said, and how this applied to the bigger marco issues, not just in the smaller goal-driving aspects. I was working on a blog post for that when it hit me. This could make a really cool plot template. The tip works on a micro level to see if your protagonist's actions are driving the plot, but when you pull back, you can also see how the entire scene works on a larger scale. Nya is trying to steal eggs for breakfast when she's caught by a night guard. This describes the first scene. Nya goes to the Healers' League to get rid of the pain she healed the night before. The cause and effect between these scenes: The boys see her shift pain, therefore/and so they tell the Elders about her. Trying to.

BIC - Ecriture - Cartouches Courtes Universelles encre bleue Bic - Etui x6: Amazon.fr: Fournitures de bureau Creative Writing Courses and Ideas: An Online Resource for Writers Character Creation Form By Crissy Moss In learning more about creating characters for my novel I learned far more about creating the world around them, and the history to them then ever I thought I would, or would need to. A person is not only a personality, but they are experiences, hopes, joys, passions, and foibles all rolled into one little package. For a writer you must not only create these in yourself, but for several, if not hundreds of other people as well. Those with the fullest detail, I have found, are actually far easier to write about then those who I know nothing about. With that having been said, I have devised a way to have all of this in one easy place, a list of questions to answer about any character for any setting so that I can have a complete history, personality, and everything else all at my finger tips. This list of questions makes that a lot easier. Remember: The questions are about your character, not about you, so answer appropriately. The Questions Physical Appearance: Favorites: Goals:

reference for writers Free Beat Sheet Template – Simple Story Development Tool There are many ways to create a “beat sheet.” On a computer. On a sheet of typing paper. On the back of an envelope. 3 by 5 cards. If you aren’t familiar with the term, a “beat sheet” is a bulleted listing of the scenes in your story. Your beat sheet can be generic (such as, “Hero meets prospective love interest”)… or specific (“Butch sees Rachel being interviewed on the news and realizes he has to meet her”). In fact, one of the ways you use a beat sheet is to evolve the generic toward the specific. If you can identify your major story milestones here, you can begin to identify the ramp-up and reactive scenes that surround them. When you’re done, you’ve got your story on one or at least several pages. Each of the four sections shows 14 beats, or scenes. Huge thanks to Storyfix reader Rachel Savage, who provided this for us. Click. Yes, you can. Will it be final? That’s what the beat sheet is for. Enjoy. CLICK HERE to get your reprintable beat sheet template.

Syllabi Syllabi We invite people to submit course syllabi based on Anthology of Modern American Poetry—on disk to Cary Nelson or by e-mail (to mhurt@uiuc.edu)—for us to place on line. We are especially interested in courses that use both Anthology of Modern American Poetry and the web site. Courses may range from broad surveys to concentrated treatments of specific modern American poetry topics. Although MAPS has many resources for students and faculty writing research papers, its most notable use may be in classes every week. This conversation can be enhanced by requiring everyone to post an email or electronic bulletin board comment about one or two poems and the attendant MAPS analyses before each class. The impact of all of this on the quality of discussion can be astonishing. Advanced undergraduates or members of graduate seminars can then go on to write original poem analyses for publication on MAPS. Return to Modern American Poetry Home