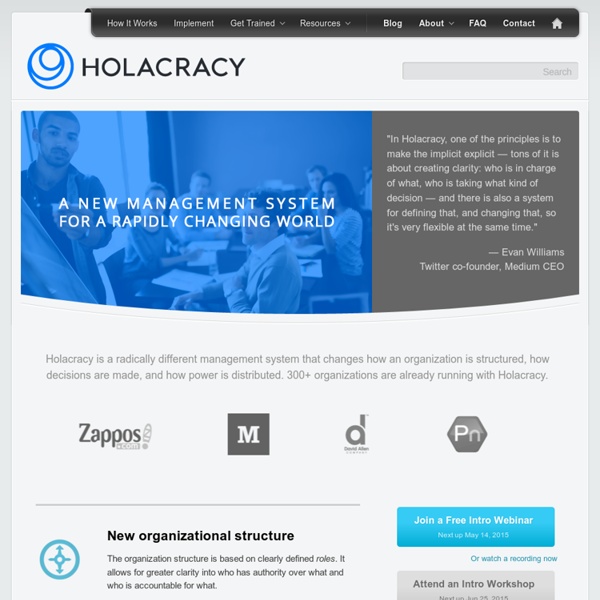 Jeff Bezos' 2 Pizza Rule: Why Small Teams Work More Productively 3K Flares Filament.io 3K Flares × Bigger doesn’t mean better when it comes to work. Jeff Bezos, the CEO of Amazon famously coined this with the 2 Pizza rule: How Medium Is Building a New Kind of Company with No Managers Editor's Note: Medium has since changed the way it runs the organization as it's scaled. You can read about how they're approaching management now here. After Ev Williams first started working on Twitter, he reached out to Jason Stirman in Texas. “You have to come out here,” Williams said. Gift Education - Schumacher College “Live as if you were to die tomorrow. Learn as if you were to live forever.” Mahatma Ghandi This is an important moment in my life where I have started to question my contribution to the world as well as my impact within it.

Inside GitHub's Super-Lean Management Strategy Imagine you could run a company on autopilot: no tier of “managers,” just people creating value by doing what they love and letting the rest fall into place. How much money would you save by eliminating all that bureaucracy? How much faster could you move? How much conflict could you erase? Holacracy - Flattening the Organization Structure and Busting Bureaucracy Zappos has been using Holacracy for quite some time now, but our experiences with it have been largely shrouded in mystery to the outside world. What better way to know about what is happening in Zappos with regards to Holacracy and Self-Organization than for us to share that with you ourselves? We will be providing you with insight into our own successes and struggles and tips we share with employees in the hopes that this information will help others more effectively transition to a self-managed, self-organized company structure. Holacracy at Zappos

Corporations must join the Collaborative Economy Right now, customers are sharing media and ideas on social technologies, in the near future, they’ll use similar technologies to share products and services, which will cause a ripple of impacts far more disruptive than what we’ve seen before. Disruption: Customers are now sharing products and services with each other, like AirBnb (vs hotels), Lyft (vs buying cars), Lendingclub (vs banks), 99 Dresses (instead of buying clothes), odesk (vs traditional hiring methods) as an alternative to traditional sales, in fact, our small list of 200 startups only has a portion of the services that have emerged, enabling this trend. At Altimeter, we’ve been tracking this space, including a number of blog posts tagged Collaborative Economy (list of startups, list of corporations involved and more), an upcoming free webinar that you can join, and I’ll be announcing some private events for our clients to dive in further.

Studio Blog -Elon Musk's Secret Weapon: A Beginner's Guide to First Principles Elon Musk is the CEO of Tesla Motors, an American electric car manufacturing company. The company has been responsible for technical innovations that many thought impossible, like producing battery packs more cheaply than ever before. Musk says these innovations are made possible by “reasoning from first principles”. Beyond the Holacracy Hype It was a Thursday afternoon in Las Vegas. Five employees were camped out in a team room at Zappos, the largest company so far to implement holacracy—a form of self-management that confers decision power on fluid teams, or “circles,” and roles rather than individuals. On this particular day, in May 2015, the circle charged with overseeing holacracy’s adoption was questioning the method’s effectiveness. A couple of months earlier, Zappos CEO Tony Hsieh had offered severance packages to all employees for whom self-management was not a good fit—or who wished to leave for any other reason. Although most decided to stay, 18% took the package, with 6% citing holacracy. In exit interviews and surveys, the 6% shared their concerns.

Adam Johnson Garbology The joys of launching a business with a strong "Why" It has been a little while since I've been around these parts, generally just loitering around the fringes offering a +1 here and there. Sorry. The reason I've gone quiet is because life offline has gone crazy busy. In a good way. And since it relates to this community, I'm going to bend my own self-imposed rule and share what I'm up to with the community. Strategy — Clay Parker Jones 1. Victory is Proximity + Speed As far as I can tell, you don’t win because you have the best idea.