25 Ways To Plot, Plan and Prep Your Story 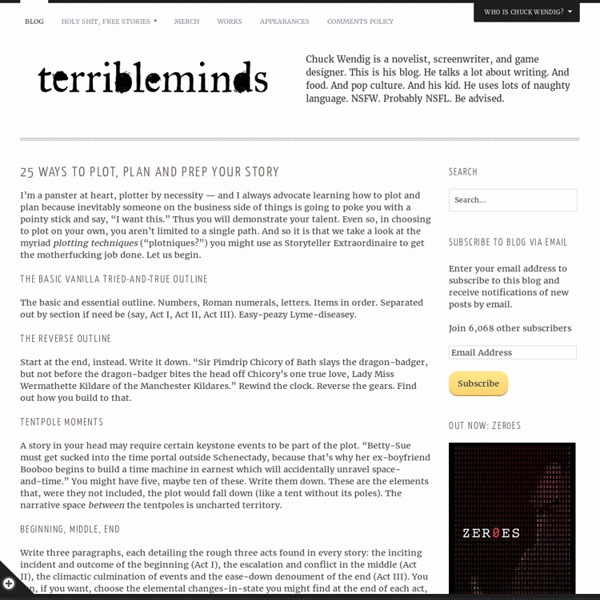 I’m a panster at heart, plotter by necessity — and I always advocate learning how to plot and plan because inevitably someone on the business side of things is going to poke you with a pointy stick and say, “I want this.” Thus you will demonstrate your talent. Even so, in choosing to plot on your own, you aren’t limited to a single path. And so it is that we take a look at the myriad plotting techniques (“plotniques?”) you might use as Storyteller Extraordinaire to get the motherfucking job done. Let us begin. The Basic Vanilla Tried-And-True Outline The basic and essential outline. The Reverse Outline Start at the end, instead. Tentpole Moments A story in your head may require certain keystone events to be part of the plot. Beginning, Middle, End A Series Of Sequences Chapter-By-Chapter For novel writers, you can chart your story by its chapters. Beat Sheet Mind-Maps Happy blocks and bubbles connected to winding bendy spokes connected to a central topical hub. Zero Draft Write A Script Collage Related:  Writing Plot Structure

How a Scene List Can Change Your Novel-Writing Life By the end of this post you will have a nagging urge to use an excel spreadsheet. Don’t make that face—I know you’re a writer and not a data analyst. Or if you are a data analyst—I get that you’re on this blog to get away from your day job. But guess what? At the suggestion of Randy Ingermason—the creator of the Snowflake Method—I listed all of the scenes in my novel in a nice little Google spreadsheet. It changed my novel-writing life, and doing the same will change yours too. Creating a scene list changed my novel-writing life, and doing the same will change yours too. Scene Lists Help You Plan I tried to write a novel once before without planning in advance. I used the Snowflake Method, which consists of several steps to designing a novel that we can discuss at a later date. Today we’re focusing on a particular step: the creation of a scene list. What is a scene list? It’s literally a list of the scenes in your novel in an excel spreadsheet. Column 1: POV. 1. 2. 3. Scene Lists Help You Edit

Writing The Story Outline Story Structure & Plot - Novel Writing Tips Conflict and Character within Story Structure The Basic Three Act Structure The simplest building blocks of a good story are found in the Three Act Structure. Separated by Plot Points, its Act 1 (Beginning), Act 2 (Middle), and Act 3 (End) refer not to where in time in the story they lie but instead fundamental stages along the way. In the Beginning you introduce the reader to the setting, the characters and the situation (conflict) they find themselves in and their goal. Plot Point 1 is a situation that drives the main character from their "normal" life toward some different conflicting situation that the story is about.

Writing 10 Steps How to Create a Character by Holly Lisle All Rights Reserved No matter what sort of fiction you’re writing, you’re going to have to populate your story with characters, and a lot of them, if not all of them, you’re going to have to create from scratch. Unfortunately — or maybe fortunately — there is no Betty Crocker Instant Character-In-A-Can that you can mix with water and pop into the oven for twenty minutes. There aren’t any quick and easy recipes, and I don’t have one either, but I do have some things that have worked for me when creating my characters, and some things that haven’t. You may find my experiences useful. Don’t start your character off with a name or a physical description. I know this doesn’t seem logical at first glance — after all, you name a baby before you get to know him very well. There are a couple of reasons. Do start developing your character by giving him a problem, a dramatic need, a compulsion. What does the character want? Don’t rely on crutches. Do empathize with your character.

Your Novel Blueprint Take advantage of our Instructor of the Month deal and get all of Karen Wiesner’s bestselling books on writing (& more) for one heavily discounted price.Order Now >> Writing a novel and building a house are pretty similar when you think about it. For instance, most builders or homeowners spend a lot of time dreaming about their ideal houses, but there comes a time when they have to wake up to the reality of building by analyzing what they expect from a house, and whether the plans they’ve selected will meet their needs. This is where a home plan checklist comes in handy. This is where a Story Plan Checklist becomes essential, because it targets the key considerations necessary when building a cohesive story that readers will find unforgettable. The Story Plan Checklist can ensure cohesion between character, setting and plot. • Working Title • Working Genre(s) • Working Point-of-View Specification • High-Concept Blurb • Story Sparks • Estimated Length of Book/Number of Sparks

102 Resources for Fiction Writing « Here to Create UPDATE 1/10: Dead links removed, new links added, as well as Revision and Tools and Software sections. Are you still stuck for ideas for National Novel Writing Month? Or are you working on a novel at a more leisurely pace? Here are 102 resources on Character, Point of View, Dialogue, Plot, Conflict, Structure, Outlining, Setting, and World Building, plus some links to generate Ideas and Inspiration. Also, I recommend some resources for Revision and some online Tools and Software. 10 Days of Character Building Name Generators Name Playground The Universal Mary Sue Litmus Test Priming the idea pump (A character checklist shamlessly lifted from acting) How to Create a Character Seven Common Character Types Handling a Cast of Thousands – Part I: Getting to Know Your Characters It’s Not What They Say . . . Establishing the Right Point of View: How to Avoid “Stepping Out of Character” How to Start Writing in the Third Person Web Resources for Developing Characters What are the Sixteen Master Archetypes?

Online resources to help you plan and write your novel From Pinterest I’m participating in National Novel Writing Month this year when I’ll write the first draft of Where the Light Enters. I’m excited to craft the story of my heroine, Emerson Page. I love a good plan so as I do my preparation research, I hunted around online for resources to help me plan my novel. Your Novel Blue Print – Author Kevin T Johns wrote a free ebook titled 12 Common Mistakes Rookie Authors Make (& How to Avoid Them!) Writing a novel is grueling work, and we could all use a little help. Did I miss any resources that you’ve found particularly helpful? Like this: Like Loading... I am a product developer who is equally inspired by new technology and ancient wisdom, a yoga and meditation teacher who learns from my students every day, and a writer who believes that creativity and determination is the most powerful duo on Earth.

How to write a book – the short honest truth Every author I know gets asked the same question: How do you write a book? It’s a simple question, but it causes unexpected problems. On the one hand, it’s nice to have people interested in something I do. If I told people I fixed toasters for a living, I doubt I’d get many inquires. People are curious about writing and that’s cool and flattering. Rock on. But on the other hand, the hand involving people who ask because they have an inkling to do it themselves, is that writing books is a topic so old and so well trod by so many famous people that anyone who asks hoping to discover secret advice is hard to take seriously. Here’s the short honest truth: 20% of the people who ask me are hoping to hear this – Anyone can write a book. If you want to write, kill the magic: a book is just a bunch of writing. Writing a good book, compared to a bad one, involves one thing. Getting published. 30% of the time the real thing people are asking is how do you find a publisher. Discouraged yet?