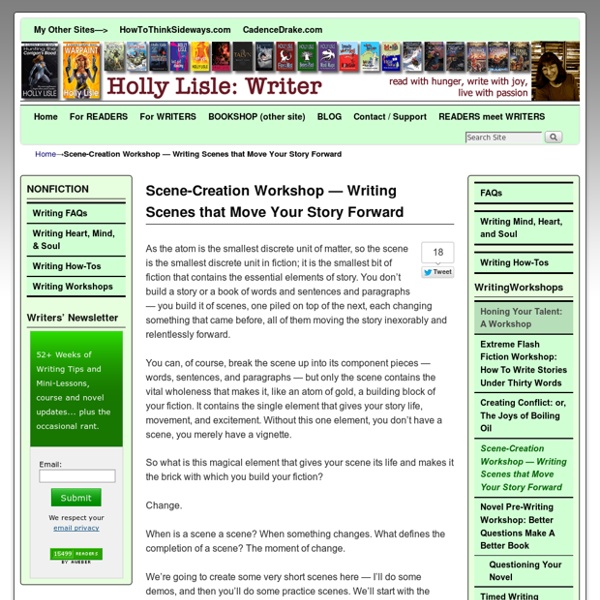 As the atom is the smallest discrete unit of matter, so the scene is the smallest discrete unit in fiction; it is the smallest bit of fiction that contains the essential elements of story. You don’t build a story or a book of words and sentences and paragraphs — you build it of scenes, one piled on top of the next, each changing something that came before, all of them moving the story inexorably and relentlessly forward. You can, of course, break the scene up into its component pieces — words, sentences, and paragraphs — but only the scene contains the vital wholeness that makes it, like an atom of gold, a building block of your fiction. It contains the single element that gives your story life, movement, and excitement. So what is this magical element that gives your scene its life and makes it the brick with which you build your fiction? Change. When is a scene a scene? We’re going to create some very short scenes here — I’ll do some demos, and then you’ll do some practice scenes.

Alliteration, assonance, emotive language, colloquial, slang, jargon, neologism, cliché, rhetorical questions, Required skills and knowledge - language features and techniques, Skills by mode: reading and writing, English Skills Year 9, NSW | Online Educa Alliteration Alliteration is the repetition of consonant sounds at the start of a word: Alliteration is used to link two or more words (and ideas) together. You will usually find examples of alliteration in poetry. Assonance Assonance is the repetition of a vowel sound. Assonance is used to link two or more words (and ideas) together. Onomatopoeia Onomatopoeia is a word that imitates or suggests the source of the sound that it describes. Emotive language Emotive language is language (in particular adjectives or adverbs) that relate to or refer to emotions: Composers use emotive language to create empathy. See Animation Colloquial language Colloquial language is language that is informal. Slang Slang includes informal (or casual) words that are made up and used by cultural groups: G'day, Mate - Australian slang for good morning Wicked air, bro - Skateboarding slang for getting high in the air barbie - Australian slang for barbecue crook - Australian slang for being sick Jargon Neologism Cliché

Writer's Café fiction writing software - novels - screenwriting - short stories - creative fun Glossary of Poetic Terms from BOB'S BYWAY featuring: Phonetic pronunciation Cross references Broad range of definitions Numerous examples A wealth of poetic quotations Writers' guidelines Hyper-linked keywords & cross references plus Sidelights Informative glimpses beyond the definitions For the recommended Alphabetic Page Version, select a letter below If you prefer, you can go to the Entire Glossary Version. I am not so lost in lexicography as to forget that words are the daughters of earth, and that things are the sons of heaven. -- Samuel Johnson, in the preface to his Dictionary Last modified on March 14, 2016 Glossary of Poetic Terms from BOB'S BYWAY Copyright © 1996 - 2016, by Robert G. rgshubinski@poeticbyway.com Privacy Policy

10 Lessons I Learned While Writing My First Novel Within the last week, I’ve completed the final round of revisions on my first novel and started querying agents. Woo! Huzzah! It’s been a long road… I started this novel about four-and-a-half years ago. Here are the top ten lessons I learned while writing my first novel: 1. And that means everything. Art simply doesn’t play nicely with timelines. 2. You know what I’m talking about, right? Not the kind where it sparks and then deflates seconds later. 3. This simple question got me over every hump of writers block while writing my novel. 4. Yes, your plot needs to make sense. 5. I thought getting through my rough draft meant the hard part was over. But, somewhere, eventually, edits start getting easier again… and that’s called the light at the end of tunnel. 6. It’s just impossible to be an artist and view your own creation with an unbiased perspective. 7. Receiving critique can sting a little. The ones who give it to you do it because they care, and they believe in you. 8. 9. 10.

Glossary of Poetic Terms Where a poem makes reference to another poem or text. For example, the 14th line of The Prelude by William Wordsworth 'The earth was all before me' alludes to one of the final lines of Paradise Lost by John Milton 'The world was all before them'. Paradise Lost, in turn, alludes to the story of Adam and Eve in Genesis. A poem containing multiple allusions is The Waste Land by T.S.Eliot which makes reference to lines written by Shakespeare, Milton, Spenser, Verlaine, Baudelaire, Marvell, Dante, Webster, St. Augustine, Goldsmith, Ovid etc. Allusion should not be confused with plagiarism.See also intertextuality.

7 ways writing by hand can save your brain It's time to put pen to paper. Our tech-dependent society has put keyboards at the tips of our fingers at all times, from our smartphones to our laptops. But when was the last time you wrote by hand? Science shows that handwriting can benefit our minds in a number of ways. We spoke to Dr. 1. Writing a calming sentence is a form of graphotherapy, Seifer says. "This actually calms the person down and retrains the brain," Seifer says. 2. Writing something in cursive, that beautiful archaic form, can coordinate the left brain and right brain. 3. For young children, writing by hand is an imperative tool in improving cognitive skills. 4. Taking pen to paper inspires more creative thought, because it is a slower process than just typing something on a keyboard, Seifer says. 5. Writing by hand is a great tool for baby boomers who want to keep their minds sharp as they get older. 6. Let's say you're taking notes in class. 7. "One key difference is movement. Have something to add to this story?

ED TECH COACHING: Fixing the Flipped Classroom: @EDpuzzle About a week and a half ago, I had the pleasure of sitting down with Quim (pronounced ‘kim’) Sabriá, one of the cofounders of EdPuzzle. His company is currently going through the startup accelerator ImagineK12, and he wanted to receive some additional feedback on his product. I was actually really impressed with their work, because I think it solves a lot of the problems that are inherent with using videos in the classroom. Flipped classrooms too often end up a digitized version of the lecture-driven classroom model, and information delivery becomes impersonal and passive. In fact, it was that frustration with flipped classrooms that drove Quim and his cofounders (Santi, Jordi and Xavi) to create EdPuzzle. #1 - EdPuzzle makes video lectures personal. Quim used to teach in Spain, and decided to flip his classroom for his students. Because of that, EdPuzzle gives you the ability to remix current YouTube videos with your own voice, or insert audio notes. Images from edpuzzle.com

Story Starters Gripping Story starters are essential. They grab the reader’s attention. Make them want to read more and keep them reading. Some of us are born with a unique talent and have a natural flair when it comes to connecting words, some of us don’t. Find below a selection of story starters from a variety of different sources. From A Tale of Two Cities (Charles Dickens) It was the best of times, it was the worst of times, it was the age of wisdom, it was the age of foolishness, it was the epoch of belief, it was the epoch of incredulity, it was the season of Light, it was the season of Darkness, it was the spring of hope, it was the winter of despair, we had everything before us, we had nothing before us, we were all going direct to Heaven, we were all going direct the other way-in short, the period was so far like the present period, that some of its noisiest authorities insisted on its being received, for good or for evil, in the superlative degree of comparison only. Recommended Links

Grammar and the Common Core I hear the same two comments at English-language arts conferences all the time: 1. “I’ve heard that research has proven grammar, usage, mechanics, spelling, and vocabulary instruction doesn’t work.” 2. “I teach grammar and they seem to get it. They pass my tests and do okay on the standardized tests, but they don’t transfer the learning to their writing or speaking. So, should we bother teaching grammar, usage, mechanics, and spelling? Irrespective of the research into the effectiveness of explicit grammar, usage, mechanics, and spelling instruction, the writers of the new Common Core State Standards (CCSS) certainly affirm the need for instruction in these skill and content areas. According to the CCSS writers, “Students must have a strong command of the grammar and usage of spoken and written standard English to succeed academically and professionally.” Experiment with different approaches until you find the ones that work the best for you and your students. What Works 1. 2. 3. 4. 5.

icarus Using Google Docs for Rubrics At last year’s annual MassCUE conference, I went to a session presented by Katrina Kennett (@katrinakennett). Her presentation focused on how to use Google Docs to create rubrics, and she outlines the process in this video: She further explains her process and goals in this blog post. I was energized by the presentation and immediately implemented Google Spreadsheets to create my own rubrics. You can create self-grading rubrics if you like, or you can create rubrics that tally the number of rubric points and convert it to a grade. The first might save a little time, but the second allows you more control over the final grade. I had a little trouble figuring out what formula to use to convert total rubric points to grade. What I can’t seem to do with my rubric is determine what formula to put in one of the cells that will convert, say, 25 points to a 90 on an essay. I am sharing a link to a Google rubric I have created combining Katrina’s method with the Greece Schools’ rubric.