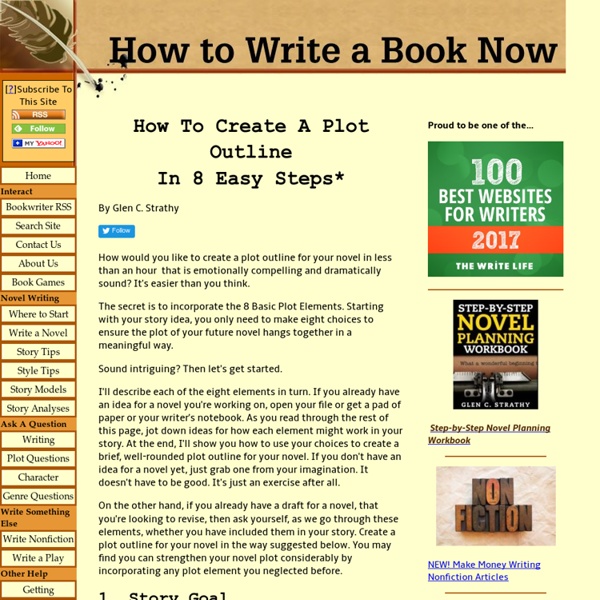 By Glen C. Strathy How would you like to create a plot outline for your novel in less than an hour that is emotionally compelling and dramatically sound? It's easier than you think. The secret is to incorporate the 8 Basic Plot Elements. Starting with your story idea, you only need to make eight choices to ensure the plot of your future novel hangs together in a meaningful way. Sound intriguing? I'll describe each of the eight elements in turn. On the other hand, if you already have a draft for a novel, that you're looking to revise, then ask yourself, as we go through these elements, whether you have included them in your story. 1. 15K+Save The first element to include in your plot outline is the Story Goal, which we covered in detail in the previous article, The Key to a Solid Plot: Choosing a Story Goal. There are many ways we could involve other characters in this goal. ... a mother who wants her to be happier. ... a jealous ex-boyfriend who tries to sabotage her love life. 2. 3. 4. 6.

Writing an Outline of Your Novel By Glen C. Strathy* The final stage of preparation - writing an outline for your novel - builds on everything you have done so far. So if you haven't yet read the following articles, you may want to do so before we go further: Part 1: Choosing an Idea.Part 2: Choosing a Story Goal.Part 3: Creating a Plot Outline in 8 Easy Steps.Part 4: Plot DevelopmentPart 5: Creating Archetypal Characters.Part 6: Making Characters Memorable and Believable.Part 7: Choosing Your Main Character and His/Her Essential CounterpartPart 8: Choosing a SettingPart 9: Choosing a Theme Naturally, you don't have to follow these articles step-by-step in order.

Tobias' 20 Plots Disciplines > Storytelling > Plots > Tobias' 20 Plots The 20 Plots | See also Ronald Tobias, in his popular and practical book, 20 Master Plots, and how to build them, describes 20 common story plots and gives lots of detail on how to construct complete stories around them. The 20 Plots 1. The Six Stages of Mental Strength Many people think that mentally strong people are simply born that way. That from the moment their feet hit the ground, they are simply endowed with some almost supernatural skill that allows them to face challenges bravely. Others think that mental strength is like a light bulb – it is either turned on or turned off. And if yours happens to be off, you are out of luck. What most people don’t know is that mental strength it is neither a genetic gift, nor a character trait.

11 Secrets to Writing Effective Character Description The following is an excerpt from Word Painting Revised Edition by Rebecca McClanahan, available now! The characters in our stories, songs, poems, and essays embody our writing. They are our words made flesh. Sometimes they even speak for us, carrying much of the burden of plot, theme, mood, idea, and emotion. Primary Source Sets Teachers Abraham Lincoln: Rise to National Prominence Speeches, correspondence, campaign materials and a map documenting the free and slave states in 1856 chronicle Lincoln’s rise to national prominence American Authors in the Nineteenth Century: Whitman, Dickinson, Longfellow, Stowe, and PoeA selection of Library of Congress primary sources exploring the topic of American authors in the nineteenth century, including Walt Whitman, Emily Dickinson, Henry Wadsworth Longfellow, Harriet Beecher Stowe, and Edgar Allan Poe. This set also includes a Teacher's Guide with historical context and teaching suggestions Assimilation through EducationPhotos, early film footage, federal government reports, cartoons, and maps tell the complex tale of the efforts to assimilate Native Americans through education Baseball: Across a Divided SocietySong sheets, video clips, images, trading cards, and photographs tell the story of how baseball emerged as the American national pastime.

Notes and diagrams show how famous authors including J.K. Rowling and Sylvia Plath planned out their novels By Tara Brady Published: 17:33 GMT, 18 May 2013 | Updated: 00:52 GMT, 20 May 2013 Gathering your thoughts when writing a novel can be a tricky process. Which is why many of the greats made sure they planned their plots beforehand. A mini-collection of notes penned by writers including James Salter and J.K.

8 simple formula plot templates « The wise sloth says, The story begins by introducing the protagonist in a way that reveals his defining characteristics, strengths, weaknesses, life circumstances, motives, and goals. SEGMENT 1 also establishes the setting and tone. Something happens to the protagonist that is out of the ordinary (for the protagonist, not for you). The event should be as apocalyptic as possible. This event throws the protagonist out of his comfort zone. The more disastrous it is for the protagonist the higher the stakes are.

Stop Thinking Goal, Think Practice I’m a big advocate of clearly defined goals and goal achievement. To my surprise, I think I may have been misplacing some of the emphasis. It’s not always about the goal. Write Better: 3 Ways To Introduce Your Main CharacterWritersDigest.com One of the biggest bugaboos in manuscript submissions is when the author doesn’t properly introduce the protagonist within the first chapter. Readers want to know quickly the protagonist’s sex, age and level of sophistication in the world of the story, and they want to relate to the character on an emotional level. Readers’ interest in the protagonist has to be earned, in other words. If we like a character, then we want to see her do well and we’re willing to follow her around and invest our time and interest in rooting her on in her struggle. But it’s important we know some essentials about the character so we can get to like her.

How Visual Thinking Improves Writing Younger kids typically love to draw and aren’t too worried about the outcomes of their artwork — until they get older. By the time they’ve learned to read and write, art takes a back burner to academics, primarily because of what most schools prioritize. Over time it becomes harder for kids to think in pictures the way they once did. But what if students were encouraged to think in pictures alongside words? 25 Ways To Plot, Plan and Prep Your Story I’m a panster at heart, plotter by necessity — and I always advocate learning how to plot and plan because inevitably someone on the business side of things is going to poke you with a pointy stick and say, “I want this.” Thus you will demonstrate your talent. Even so, in choosing to plot on your own, you aren’t limited to a single path. And so it is that we take a look at the myriad plotting techniques (“plotniques?”) you might use as Storyteller Extraordinaire to get the motherfucking job done. Let us begin.