How to Make Readers Feel Emotion 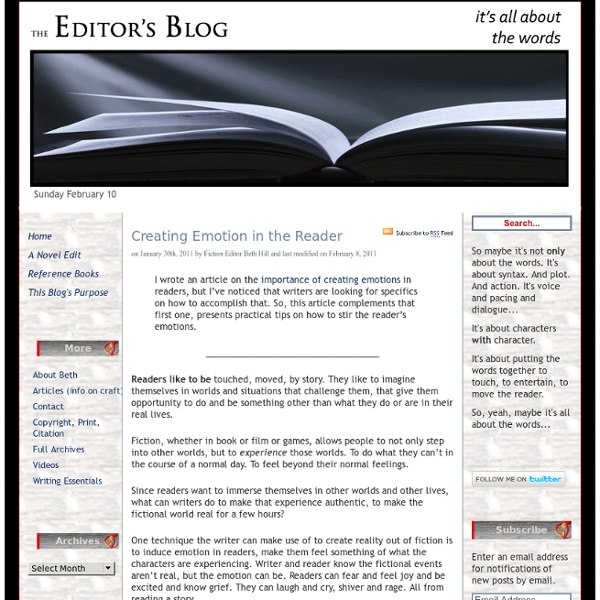 on January 30th, 2011 by Fiction Editor Beth Hill and last modified on February 8, 2011 I wrote an article on the importance of creating emotions in readers, but I’ve noticed that writers are looking for specifics on how to accomplish that. So, this article complements that first one, presents practical tips on how to stir the reader’s emotions. Readers like to be touched, moved, by story. They like to imagine themselves in worlds and situations that challenge them, that give them opportunity to do and be something other than what they do or are in their real lives. Fiction, whether in book or film or games, allows people to not only step into other worlds, but to experience those worlds. Since readers want to immerse themselves in other worlds and other lives, what can writers do to make that experience authentic, to make the fictional world real for a few hours? But how can a writer accomplish this? 1. This is a major key for rousing reader emotions. 2. 3. 4. 5. 6. 7. 8. 9. 10. 11. 12.

7 Keys To Write the Perfect First Line of a Novel Earlier this week, I read “Poppies,” a short story by Ulrica Hume, one of our authors on Story Cartel. Initially, I had only planned on skimming a few pages, but the first line hooked me. Before long, I was finishing the last page.1 Kurt Vonnegut’s 8 Tips on How to Write a Great Story By Maria Popova The year of reading more and writing better is well underway with writing advice the likes of David Ogilvy’s 10 no-bullshit tips, Henry Miller’s 11 commandments, Jack Kerouac’s 30 beliefs and techniques, John Steinbeck’s 6 pointers, and various invaluable insight from other great writers. Now comes Kurt Vonnegut (November 11, 1922–April 11, 2007) — anarchist, Second Life dweller, imaginary interviewer of the dead, sad soul — with eight tips on how to write a good short story, narrated by the author himself. Use the time of a total stranger in such a way that he or she will not feel the time was wasted.Give the reader at least one character he or she can root for.Every character should want something, even if it is only a glass of water.Every sentence must do one of two things — reveal character or advance the action.Start as close to the end as possible.Be a Sadist.

Seven Common Character Types Seven Common Character Types by Terry W. Ervin II Fiction writers employ a variety of characters while weaving their tales. Character meme fun! This is how I was procrastinating during the exam period. "Post-processual theory? ...After I've cleared out my hard drive, I think... ... ooh! What's this? Top 10 Tips : Starting and Finishing the 1st Draft With this year’s Nanowrimo, I will be finishing the first draft of a novel for the fifth time. It’s a great feeling, to reach that last page and set down that last period. Whenever I’ve done that, I always sit and stare blankly at the screen for a while. In slight disbelief that I did it. That it’s over. However, getting there is no picnic.

A quick overview of the Hero’s Journey Planning out a novel? Be sure to join my newsletter for a FREE plotting/revision roadmap, and check out the full series on plotting novels in a free PDF! Over the last two weeks, we’ve looked at two plotting methods. One helped us parse our story into parts, the other helped us grow it from an idea. But a weakness of both is that neither really tells us what kind of events we need in a story—especially in the sagging middle. The Hero’s Journey is based on the universal archetype work of Carl Jung, as applied by Joseph Campbell.

Six Tips on Writing from John Steinbeck By Maria Popova If this is indeed the year of reading more and writing better, we’ve been right on course with David Ogilvy’s 10 no-nonsense tips, Henry Miller’s 11 commandments, and various invaluable advice from other great writers. Now comes Pulitzer Prize winner and Nobel laureate John Steinbeck (February 27, 1902–December 20, 1968) with six tips on writing, originally set down in a 1962 letter to the actor and writer Robert Wallsten included in Steinbeck: A Life in Letters (public library) — the same magnificent volume that gave us Steinbeck’s advice on falling in love. Steinbeck counsels: Abandon the idea that you are ever going to finish. Avoid Overactive or Inactive Supporting Characters When Writing A Novel One of the most common plot problems writers face is mistaking minor characters and subplots for the main character and primary plot. In the following excerpt, Joseph Bates, author of The Nighttime Novelist, discusses overactive or inactive characters and subplots and how they can impact your story. Overactive or Inactive Supporting Characters

The 100 Most Important Things To Know About Your Character (revised) Quote from original Author(Beth):This list came about when, one day while struggling to develop a character for an upcoming Hunter game, my lovely roommate Nikki looked at me and said something like, "Wouldn't it be cool to have a list of questions you could go through and answer while you were making characters, so you'd make sure to consider all sorts of different elements in their personality?" I agreed, and that very evening we sat down over hot chocolate and ramen noodles to whip up a list of 100 appearance-, history-, and personality-related questions (which seemed like a nice even number) to answer as a relatively easy yet still in-depth character building exercise. Later on, we went through the list again, took out the questions that sucked (because there were a lot of them) and replaced them with better ones. What you see before you is the result of that second revision. Just don't email us specifically to tell us how much we suck. That only results in cranky gamerchicks.

Related:  Writing • dianemarycowan
Related:  Structure   -  Tips   -  Writing Resources   -  the structure of man   -  Sentence Structure   -  P1 Some resources mostly concerned with atomic structure   -  Story Structure writing tips   -  Structure   -  Structure and How To   -  Taxes & Business Structure   -  1 Structure of the Earth 1 FULL   -  Five Open Source Apps For Writers and Authors   -  Karpman drama triangle - Wikipedia, the free encyclopedia   -  102 Resources for Fiction Writing « Here to Create   -  Mini eco   -  Gestalt psychology - Wikipedia, the free encyclopedia   -  MSNBC - How to Think About the Mind   -  Elements of a Story   -  A quick overview of the Hero’s Journey | Jordan McCollum   -  Scene-Creation Workshop — Writing Scenes that Move Your Story Forward | Holly Lisle: Official Author Homepage   -  Create A Plot Outline In 8 Easy Steps   -  Three-act structure - Wikipedia, the free encyclopedia   -  Morality Quiz/Test your Morals, Values & Ethics - YourMorals.Org   -  Crime Fiction Collective: Set up Your Story in the First Paragraphs   -  Holacracy | Social Technology for Purposeful Organization   -  How to Write a Synopsis of Your Novel   -  6 Writing Outline Templates and 3 Reasons to Use Them — Self Publishing Team   -  8 simple formula plot templates | The Wise Sloth   -  The 4 Story Structures that Dominate Novels   -  How to Plot a Character Driven Book in 3 Easy Steps | Robyn DeHart   -  How to Write a Script Outline | The 8 Essential Plot Points   -  What is Plot - How to Write a Story from Beginning to End   -  How to Plot a Novel With Index Cards | eHow   -  How It Works | Holacracy   -  25 Unique Places to Find Story Ideas   -  Creative Writing Worksheets--The Writer's Craft   -  How to Organize and Develop Ideas for Your Novel   -  NOVA Elements on the App Store on iTunes   -  Writing Fiction: How to Structure a Killer Novel Ending   -  Genetics