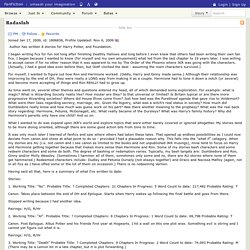 I began writing fics for fun not long after finishing Deathly Hallows and long before I even knew that others had been writing their own fan fics. I began because I wanted to know (for myself and my own amusement) what led from the last chapter to 19 years later. I was willing to accept canon if for no other reason that it was apparent to me by The Order of the Phoenix where JKR was going with the characters. (Actually, I had a good idea even before then, but OotP cinched the deal - assuming the main characters survived.) For myself, I wanted to figure out how Ron and Hermione worked. As time went on, several other themes and questions entered my head, all of which demanded some exploration.

What I wanted to do was expand upon JKR's world and explore topics that were either barely covered or ignored altogether. It was only much later I learned of fanfics and saw where others had taken these tales. Stories: 1. Canon. 2. Canon. Harry Potter FanFic Archive. SniperCT. Author has written 78 stories for Final Fantasy I-VI, Warcraft, Tomb Raider, Rift, X-Men, Star Wars, Mirror's Edge, Frozen, Pacific Rim, BioShock, Avatar: Last Airbender, Mass Effect, Legend of Korra, Overwatch, Silmarillion, Last of Us, and X-Force. 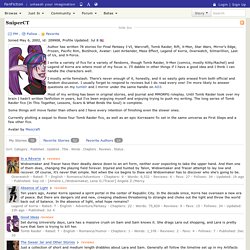 I write a variety of fics for a variety of Fandoms, though Tomb Raider, X-Men (comics, mostly Kitty/Rachel) and Legend of Korra are where most of my focus is. I'll dabble in other things if I have a good idea and I think I can handle the characters well. I mostly write femslash. There's never enough of it, honestly, and it so easily gets erased from both official and fandom discussion. I usually forget to respond to reviews but I do read every one! Stargatesg1fan1. Author has written 16 stories for Stargate: SG-1, Harry Potter, Percy Jackson and the Olympians, x-men, Inheritance Cycle, and Avengers. 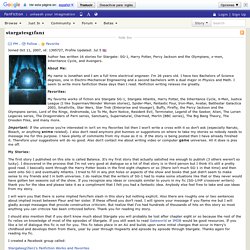 About Me: My name is Jonathan and I am a full time electrical engineer. DobbyElfLord. Author has written 10 stories for Harry Potter. 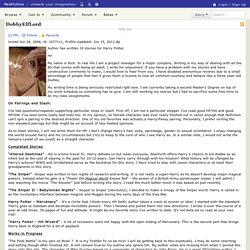 Hi! My name is Rick. In real life I am a project manager for a major company. Writing is my way of dealing with all the BS that comes with being an adult. I write for enjoyment. Arawn D. Draven. Author has written 10 stories for Aliens/Predator, Harry Potter, Claymore, Negima! 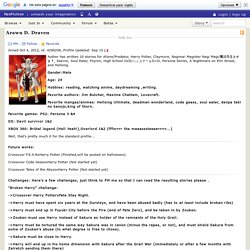 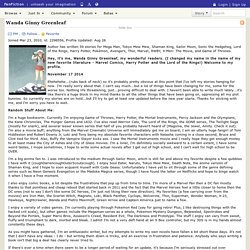 Hey, it's me, Wanda Ginny Greenleaf, my wonderful readers. (I changed my name in the name of my new favorite literature - Marvel Comics, Harry Potter and the Lord of the Rings!) Welcome to my profile. November 17 2014 Ehehehehe... Random Stuff About Me: I'm a huge bookworm. I'm a big anime fan to. I also enjoy comic books, a lot despite the frustrations that pop up from time to time. Zeropolis79. Loki's Only Love. Author has written 27 stories for Hairspray, Labyrinth, Christy, Alice in Wonderland, 2010, Thor, Spirited Away, Secret of Moonacre, Dirty Dancing: Havana Nights, and Troy. 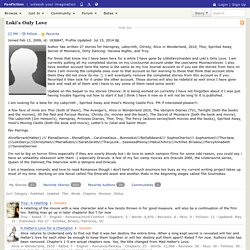 For those that know me I have been here for a while I have gone by Littlefairymaiden and Loki's Only Love. I am currently putting all my completed stories on my LiveJournal account under the username Moonacrelover. I also have another account here the name is the same as my live Journal account so if you see the stories from here on there I am moving the complete ones over to that account so fair warning to those that think that account stole them they did not since its me :). I will eventually remove the completed stories from this account so if you Favorited it then look for it under the other account. Those stories will also be rebeta'd as well since I have gone back and read all of them and i have to say some of them need some work! 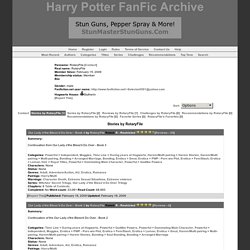 At age seven, he figures out that he can make things happen at will, like magic. He uses this ability to counter his bullying cousin, Dudley, and form a gang of his own. Harry’s gang is composed entirely of female members – except of course for Harry himself. They band together to protect themselves from the Dursley gang, and form a life-long friendship that is almost like a family. This fic is taken over from szordara and his fic Harry Potter and the Harem of Honeys with his permission! Lucifael's Fiction and a whole lot more. Poetheather1. Author has written 30 stories for Kim Possible, Harry Potter, Valdemar universe, Ranma, Stargate: SG-1, Winnie-the-Pooh, Watchmen, Avengers, Doctor Who, Frozen, and Glee. 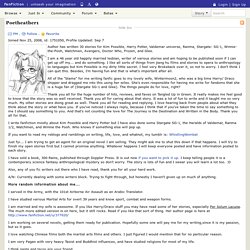 I am a 46 year old happily married lesbian, writer of various stories and am hoping to be published soon if I can get up off my... and do something. I like all sorts of things from jiang hu films and stories to opera to anthropology to languages but Kim Possible is my dirty little secret. I feel very Brokeback over it, so not to worry. I don't think I can quit this. Besides, I'm having fun and that is what's important after all. All of the "blame" for me writing fanfic goes to my lovely wife, Wintermoon2, who was a big time Harry/ Draco shipper and dragged me into this using her wiles. In Defilade. Author has written 6 stories for Smallville, Tom Clancy, Harry Potter, Stargate: SG-1, Watch Dogs, Splinter Cell, Nikita, Stargate: Atlantis, and NCIS. 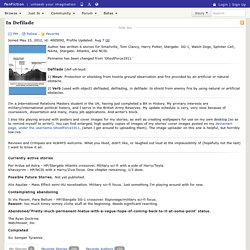 Penname has been changed from 'GhostForce1911.' Defilade [def-uh-leyd: 1) Noun: Protection or shielding from hostile ground observation and fire provided by an artificial or natural obstacle. 2) Verb (used with object) defiladed, defilading, in defilade: to shield from enemy fire by using natural or artificial obstacles. I'm a International Relations Masters student in the UK, having just completed a BA in History. I also like playing around with posters and cover images for my stories, as well as creating wallpapers for use on my own desktop (so as to remind myself to write!). Mrs.InsaneOne. Author has written 39 stories for Harry Potter, Pokémon, Natsume Yūjin-Chō, Animal Ark Series, Gundam Wing/AC, Naruto, Sword Art Online/ソードアート・オンライン, Hunter X Hunter, Sherlock, One Piece, Avengers, and Prince of Tennis.

Welcome to my insanity... =) Just a bit about me as a reader and an author I've been reading HP FanFiction since 2003 and enjoy a wide range of genres & ships set in almost any time period including x-overs. I've always loved to write and after reading a few FanFics I was inspired to write my own. A number of my stories have been posted on at least three sites under the same penname, with this being the latest. Current Projects An Epic Journey (T) - Crossover HP/Pokémon & a stand alone epic. Note: I will never abandon a story or a series though there may be times I go long stretches of time without updating. Skipsophrenic. Author has written 16 stories for Ranma, Harry Potter, Doctor Who, StarTrek: Voyager, and Justice League. Name i go by: Skip Age: 31 Star Sign: Scorpio Gender: Male NOTE: Normally I'd put this ate the end of my profile as a standard update, but as I keep getting inboxed with complaints that "Character A"wouldn't do this like that at the beginning of a story or "Character B" wouldn't act like this, can people please remember that this is FANFICTION not a re-writing of cannon.

Thank you. Plums. Author has written 4 stories for Harry Potter, Star Wars, Sekirei, and Warcraft. Due to collaborations with kathryn518, writing has definitely picked up again, and i'm hoping to not have the big breaks that I've experienced lately due to work kicking my butt. Currently working on three primary stories (lots of others, doubt they'll ever be posted): "Wizard Runemaster" - Harry / huge harem (9 girls plus random one night stands) - Warcraft Crossover (focused upon WoW storyline at level 60, 70, and 80). No outline. Inspired by "The Black Scorpion" by etincelle047. Lupine Horror. Author has written 7 stories for Harry Potter, X-overs, Naruto, Fate/stay night, Magical Girl Lyrical Nanoha, and Natsume Yūjin-Chō.