The Weight Of Blood By Laura McHugh. Like many suspense novels, The Weight of Blood starts with a body and a mystery. 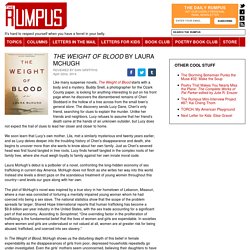 Buddy Snell, a photographer for the Ozark County paper, is looking for anything interesting to put on his front page when he discovers the dismembered remains of Cheri Stoddard in the hollow of a tree across from the small town’s general store. The discovery sends Lucy Dane, Cheri’s only friend, searching for clues to explain the murder. Unlike her friends and neighbors, Lucy refuses to assume that her friend’s death came at the hands of an unknown outsider, but Lucy does not expect the trail of clues to lead her closer and closer to home. We soon learn that Lucy’s own mother, Lila, met a similarly mysterious end twenty years earlier, and as Lucy delves deeper into the troubling history of Cheri’s disappearance and death, she begins to uncover more than she wants to know about her own family. Laura McHugh. 53 More Bookish Movies and TV Shows Streaming on Netflix. It’s been a year since I did a roundup of 60 bookish films streaming on Netflix which means it’s time for an update. 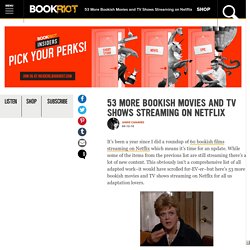 While some of the items from the previous list are still streaming there’s a lot of new content. This obviously isn’t a comprehensive list of all adapted work–it would have scrolled for-EV-er–but here’s 53 more bookish movies and TV shows streaming on Netflix for all us adaptation lovers. Family The Little Prince (2015/ Rachel McAdams, Jeff Bridges, Paul Rudd): Beautiful 3D animation based on the same titled French novella by Antoine de Saint-Exupery. Kindle Users' 10 Most Highlighted Passages of THE HANDMAID'S TALE. The Handmaid’s Tale is everywhere, what with our society creeping ever closer to the book becoming reality under a President who is hostile to women, and with the newly-released Hulu show (so close to home, y’all). 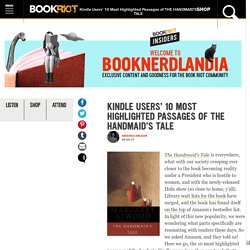 Library wait lists for the book have surged, and the book has found itself on the top of Amazon’s bestseller list. In light of this new popularity, we were wondering what parts specifically are resonating with readers these days. So we asked Amazon, and they told us! 100 Biographies and Memoirs of Remarkable Women. I still remember when I discovered Helen Keller. 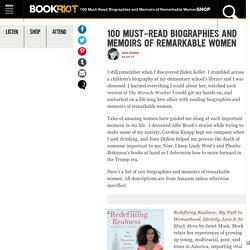 I stumbled across a children’s biography at my elementary school’s library and I was obsessed. I learned everything I could about her, watched each version of The Miracle Worker I could get my hands on, and embarked on a life-long love affair with reading biographies and memoirs of remarkable women. Tales of amazing women have guided me along at each important moment in my life. I devoured Allie Brosh’s stories while trying to make sense of my anxiety, Caroline Knapp kept me company when I quit drinking, and Joan Didion helped me process the death of someone important to me. Depressing Book Quotes as Motivational Posters. There have been many different renditions of posters that mock those ubiquitous motivational posters so beloved by high school guidance counselors, college deans, and HR professionals. 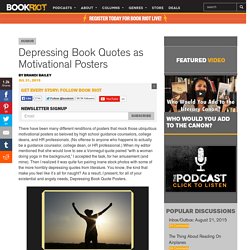 (No offense to anyone who happens to actually be a guidance counselor, college dean, or HR professional.) When my editor mentioned that she would love to see a Vonnegut quote paired “with a woman doing yoga in the background,” I accepted the task, for her amusement (and mine). Book Recommendations and Reviews. There’s a big, wonderful world of bookish websites out there. 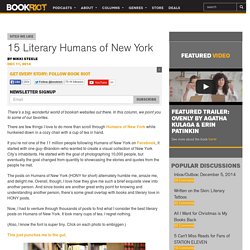 In this column, we point you to some of our favorites. There are few things I love to do more than scroll through Humans of New York while hunkered down in a cozy chair with a cup of tea in hand. If you’re not one of the 11 million people following Humans of New York on Facebook, it started with one guy–Brandon–who wanted to create a visual collection of New York City’s inhabitants. He started with the goal of photographing 10,000 people, but eventually the goal changed from quantity to showcasing the stories and quotes from the people he met. What Makes You Pick Up a Memoir? I have to confess: I love memoirs. 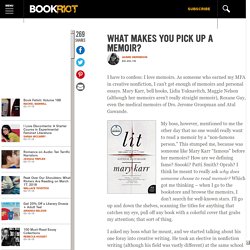 As someone who earned my MFA in creative nonfiction, I can’t get enough of memoirs and personal essays. Mary Karr, bell hooks, Lidia Yuknavitch, Maggie Nelson (although her memoirs aren’t really straight memoir), Roxane Gay, even the medical memoirs of Drs. Jerome Groopman and Atul Gawande. Around the World in 80 Books: A Global Reading List. Ready for some serious armchair travel? 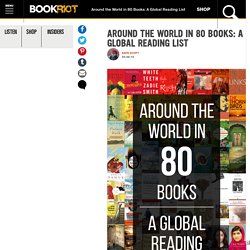 Take a trip around the globe with these books from the eighty most populated countries in the world. Afghanistan – The Kite Runner by Khaled Hosseini: An unlikely friendship forms between a well-to-do boy and the son of his father’s servant in the years leading up to the Soviet-Afghan War. 100 Must-Read Memoirs. I know quite a few readers who credit reading a memoir as their gateway into other nonfiction. 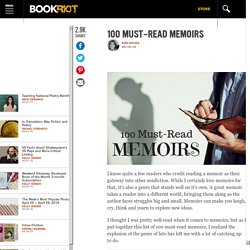 While I certainly love memoirs for that, it’s also a genre that stands well on it’s own. A great memoir takes a reader into a different world, bringing them along as the author faces struggles big and small. Memoirs can make you laugh, cry, think and yearn to explore new ideas. I thought I was pretty well-read when it comes to memoirs, but as I put together this list of 100 must-read memoirs, I realized the explosion of the genre of late has left me with a lot of catching up to do. Although the memoir can trace history back as far as St. 10 More Famous Poems Recited by Famous People. April is National Poetry Month, so I thought the time was ripe for another round of famous poems read by famous people (see previous round here). 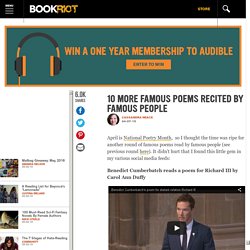 It didn’t hurt that I found this little gem in my various social media feeds: Benedict Cumberbatch reads a poem for Richard III by Carol Ann Duffy Here are nine more performances worth a watch. It’s a mix of actors and musicians, the familiar and the lesser known. Do you have any favorites? 10 Of Our Favorite Literary TED Talks From 2016. In 2015, our favorite literary TED talks covered everything from poems about prime numbers to fantastical book art. In 2016, we’ve got another great list of literary TED talks for your watching pleasure. From superheroes to commas to language, there’s a lot to love here.

Christopher Bell: Bring on the female superheroes! 5 Apps for People Who Love Books. This post is sponsored by Playster. Playster is the world’s first all-in-one entertainment service. It takes care of everything — ebooks, audiobooks, music, movies, TV shows and games — and gives you unlimited access to millions of titles for one flat monthly fee. That’s right! Playster lets you enjoy unlimited audiobooks and ebooks — no restrictions, no credit systems.The service is accessible through all web browsers, as well as Playster’s Android and iOS apps, on virtually any device. What’s more, the offline mode lets you save all of your favorites for on-the-go reading when there’s no Internet access around.

My Little Free Library Gives Out 300 Books a Month (And I'm Okay With That) A little over a year ago, my family put up a Little Free Library in front of our building in Harlem. I had gone through the process of getting the project approved by our co-op board, and the building even donated money to have the structure built by a neighborhood carpenter. My children and I carefully culled our stack of children’s book for a month before the library was installed in front of our building. The Basic Writings of Bertrand Russell - Bertrand Russell - Google Books. The Greatest American Novel You’ve Never Heard Of. In one of those few gratifying instances of belated artistic justice, John Williams’s “Stoner” has become an unexpected bestseller in Europe after being translated and championed by the French writer Anna Gavalda.

Once every decade or so, someone like me tries to do the same service for it in the U.S., writing an essay arguing that “Stoner” is a great, chronically underappreciated American novel. (The latest of these, which also lists several previous such essays, is Morris Dickstein’s for the Times.) 10 More Famous Poems Recited by Famous People. From Dream to Nightmare: John Steinbeck on the Perils of Publicity and the Dark Side of Success.

By Maria Popova “It is so hard to know anything. So impossible to trust oneself. Even to know what there is to trust.” Cool Little Free Libraries Around The World. 10 Books to Celebrate Jane Austen's Birthday. Punctuation in novels. The 10 Best Book Endings. Buoyant and Blue: On Jessica Sofferâs Tomorrow There Will Be Apricots. Six Postcards From Famous Writers: Hemingway, Kafka, Kerouac & More. This Story Stinks. YEAR OF DAVID FOSTER WALLACE Pt. 2. This Story Stinks. Three-Minute Fiction: Call Me? We Are What We Quote. Khaled Hosseini: 'If I could go back now, I'd take The Kite Runner apart' Sales of '1984' spike amid NSA spying scandal. Staff Pick: Terry Tempest Williamsâs When Women Were Birds.

The Weight of Blood: A Novel: Laura McHugh: 9780812995206: Amazon.com: Books. 13 Great Facebook Pages for Writers. Authors. 19 Quirky Conundrums Only Book Lovers Understand. Please Kill the Expert Review: A Modest Proposal. The great Chinua Achebe was the man who gave Africa a voice. Is Dave Eggers’ ‘The Circle’ our Generation’s ‘1984’?

9 Epic Literary Burns. Great Expectations 3: Happily Ever After? American Authors in the Nineteenth Century: Whitman, Dickinson, Longfellow, Stowe, and Poe. Little House on the Prairie: On Hating Ma. Can You Guess the Authors by Their Nobel Citations? Sales of '1984' spike amid NSA spying scandal. Best of Book Riot: 21st Century Literature by Women: A Reading List - BOOK RIOT. And the Pulitzer Prize Winners in Books For 2014 Are... David Foster Wallace’s 1994 Syllabus: How to Teach Serious Literature with Lightweight Books. For Charlotte Brontë's birthday, a comic...