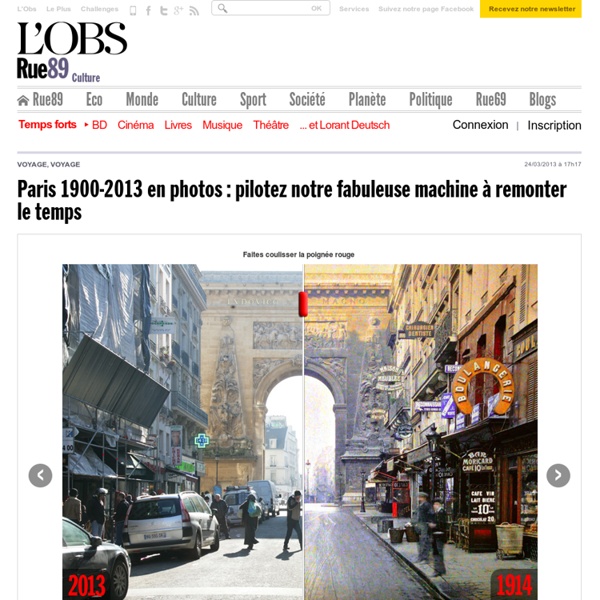 Messy Nessy Chic The Paris Time Capsule Apartment A Parisian apartment left untouched for over 70 years was discovered in the quartier of Pigalle a few summers ago and I’ve been meaning to share the pictures with you. Time to unlock the vault … The owner of this apartment, Mrs. De Florian left Paris just before the rumblings of World War II broke out in Europe. Earth from Above a collection of aerial photography "Earth From Above" is the result of the aerial photographer Yann Arthus-Bertrand's five-year airborne odyssey across six continents. It's a spectacular presentation of large scale photographs of astonishing natural landscapes. Every stunning aerial photograph tells a story about our changing planet. Coal mine in South Africa

Perhaps Paris Listen, there is no way around it. In the article that follows I'm going to be forced to wield sweeping generalisations, peddle the occasional stereotype, and generally piss off the people of my adopted home. However. 50 Incredible Photography Techniques and Tutorials Advertisement Over the recent months we’ve been presenting various showcases of photography – while many readers hated the showcases, most readers found them inspirational and perfect for a lousy workday’s morning. However, what we should have done in the inspirational posts is not just provide you with some inspiration for your work, but also present useful photographic techniques which can help you to achieve optimal pictures for your designs. And as requested by many of you, now it’s time to correct our mistake.

Paris is Brewing Hoi Chi Ng Télescope, a cafe run by Nicolas Clerc and David Flynn in the First Arrondissement in Paris. Finally, Paris has a coffee scene. The city has always been the paradox of the industry, a great cafe town where an otherwise discerning audience happily throws back watery shots of ashy swill. I first wrote about Paris coffee in 2010, and after returning to the topic last year I decided to sit on my hands until somebody in the city figured out what it was missing. Improve your photography with clasical art. Adjusting your photographs to get the color 'just right' can be a chore. Think about this: The Old Masters of painting spent years of their lives learning about color. Why let all their effort go to waste on the walls of some museum when it could be used to give you a hand with color correction? When Photoshop entered the CS series it included a new tool called 'Match Color.' This tools was made so that you could match a series of photos to one another.

Peter Turnley: French Kiss – A Love Letter to Paris Peter Turnley is a renowned photojournalist, who has, for more than four decades, created an enduring legacy of memorable images that reveal the depth and pathos of our common human experience and history. Turnley has photographed monumental moments of historic change and revolution including the Gulf War, Iraq, Kosovo, Bosnia, Chechnya, the fall of the Berlin Wall, revolutions in Eastern Europe, Tiananmen Square, the release of Nelson Mandela, the end of apartheid in South Africa, and many world leaders including President Barack Obama. In his new book “French Kiss – A Love Letter to Paris,” he reveals moments of poetry and beauty he witnessed as a street photographer during the past 40 years of documenting the city of love, which is his adopted home.

Abandoned Places: 10 Creepy, Beautiful Modern Ruins Abandoned Places: 10 Creepy, Beautiful Modern Ruins Abandoned Places | We humans are explorers by nature. The quest for discovery, both old and new, is part of what separates us from rest of the animal kingdom. Since the world we live in has been largely mapped and plotted, we urban adventurers turn our sights toward the relics of old and the ruins of the recent past. If you find beauty in urban decay, in the crumbling and abandoned places of yesteryear, you’ll want to read on. Femen's topless warriors start boot camp for global feminism In a chaotic and crumbling former public washhouse in a rundown district of northern Paris, Inna Shevchenko was explaining how a large leather punchbag hanging from the rafters might be used by the foot soldiers of a new generation of feminists. As she prepared to welcome recruits to the Ukrainian-based feminist group Femen's first "international training camp", it was clear that the instruction would not be all ideological. The talk was of "war", "soldiers", "terrorism" and "enemies". Was it not curious, one French journalist asked, that Inna and her warriors had adopted the language of combat, traditionally a male domain, to describe their mission? Was it not also inconsistent, another asked, that the new feminists were using nakedness to rail against female exploitation?