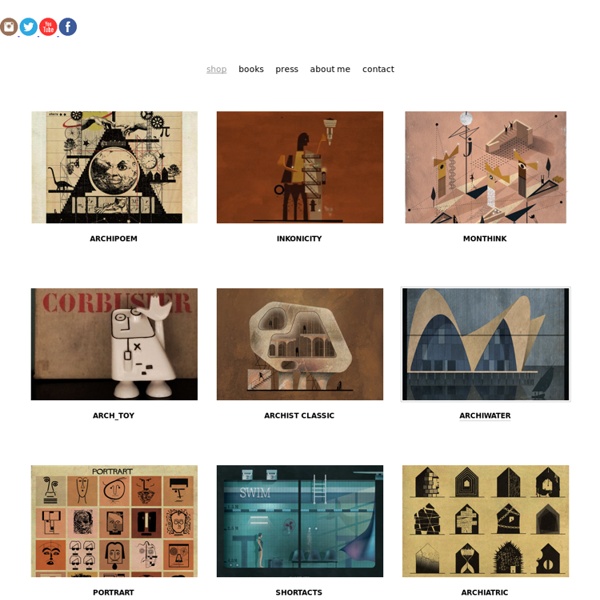 4 Ways You Can Dress Like an Architect 4 Ways You Can Dress Like an Architect 1. All black.2. Black with a bit of grey.3. Black with a bit of white.4. Angela Dalinger This month I will have my first exhibition in Germany in an Italien bookshop in Berlin ( Raum Italic ) together with the artist Robert Deutsch. They asked us to do a new movie poster for an italien movie…and this was the only one I remembered. The 120 days of sodom, a quite disgusting movie. excerpts from my first Werewurf comic Love love love your work, Angela! Keep 'em coming! Would love to see a bingo parlor!

Starving Artist Recipes I used to live in Seattle and one of the big things I miss about that city is Tom Douglas’s Serious Pie restaurant. It is seriously intense, with their stone-encased applewood burning ovens, exclusive charcuterie, and artisan cheeses. But my fav is their Yukon Gold Potato with Rosemary and Pecorino Romano Pizza. While flights from LA to Seattle aren’t super expensive, making this pizza (or as close to it as possible) is a better alternative. Due to my extreme laziness when it comes to kneading, I turn to Jim Lahey’s genius invention, the No Knead Pizza Dough. It’s foolproof, thank G-d, and makes 2-3 pizzas, which will keep in the fridge for a few days.

The "Kitchenless" House: A Concept for the 21st Century Architect Anna Puigjaner imagines a future in which housing is suited to the needs of its inhabitants. Sometimes that happens to mean not having a kitchen. Her project “Kitchenless” has received the Wheelwright Prize from Harvard University, along with an endowment of $100,000 for research on existing models of communal residences worldwide.

Lisson Gallery The American artist Fred Sandback (1943–2003) worked with elastic cord and acrylic yarn to delineate or bifurcate three-dimensional space, creating room-filling volumetric forms using the most minimal of means. By stretching single strands of yarn point-to-point to create geometric figures, Sandback’s near intangible objects nevertheless amounted to precise and subtle delineations of pictorial planes and architectural volumes. Despite this relationship to the built environment and to the practice of drawing, he became known primarily as a Minimalist sculptor, alongside such contemporaries as Dan Flavin, Donald Judd, Sol LeWitt and Carl Andre, but Sandback was also a forerunner of and a major influence on many of today’s installation artists. Contrary to his own matter-of-fact artistic statements about his practice, his work has been said to conjure up references to architecture, painting, sculpture and even music, given his early fascination for stringed musical instruments.

9 Reasons to Become an Architect 9 Reasons to Become an Architect Making the decision to pursue architecture is not easy. Often, young students think that they have to be particularly talented at drawing, or have high marks in math just to even apply for architecture programs. Otherothers' "Offset House" Reveals the Architecture Hidden in Suburban Homes Otherothers' "Offset House" Reveals the Architecture Hidden in Suburban Homes In the classic film The Wizard of Oz, Dorothy and friends manage to obtain a visit with the great and powerful wizard, who appears to them as an enormous, grotesque head, surrounded by smoke and flames, with a booming voice and a hostile demeanor. But when Toto pulls back the curtain, the wizard’s true nature is revealed, and it is only then that he is able to help the gang get the help for which they journeyed many miles down the yellow brick road. In architecture today, suburban houses share many of the characteristics of the wizard’s illusion: large, stand-offish and intimidating.