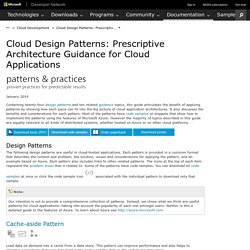 It also discusses the benefits and considerations for each pattern. Most of the patterns have code samples or snippets that show how to implement the patterns using the features of Microsoft Azure. However the majority of topics described in this guide are equally relevant to all kinds of distributed systems, whether hosted on Azure or on other cloud platforms. The following design patterns are useful in cloud-hosted applications. Associated with the individual pattern to download only that sample. Cache-aside Pattern Load data on demand into a cache from a data store.

For more info, see the Cache-aside Pattern. Circuit Breaker Pattern Handle faults that may take a variable amount of time to rectify when connecting to a remote service or resource. 6 key questions to ask when designing cloud architecture. IBM's open cloud architecture. Introduction Cloud computing is changing the way we think about technology, and it’s no passing fad. Get_pdf.cfm. Cloud Architecture: Get It Right The First Time. 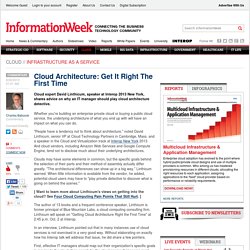 Whether you're building an enterprise private cloud or buying a public cloud service, the underlying architecture of what you end up with will have an impact on what you can do. "People have a tendency not to think about architecture," noted David Linthicum, senior VP at Cloud Technology Partners in Cambridge, Mass. and a speaker in the Cloud and Virtualization track at Interop New York 2013. And cloud vendors, including Amazon Web Services and Google Compute Engine, tend not to disclose much about their underlying architectures. Clouds may have some elements in common, but the specific goals behind the selection of their parts and their method of assembly actually differ greatly.

"The architectural differences can show up in a big way," Linthicum warned. . [ Want to learn more about Linthicum's views on getting into the cloud? The Internet map. The Role of the Cloud Architect. Right! 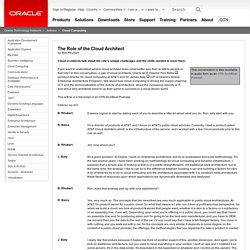 And with the movement towards cloud different public cloud providers have different offerings. For example, the product I lead at ATT is called Cloud Architect, and we also offer bare metal computing without a hypervisor. Amazon's public cloud, for example, is built on Xen. So it looks almost like a workload provisioning method, to where now you have an application or you have a large environment and you have to choose. Do you want to go to a public cloud, or is a private cloud just the right thing for you? Assuming there's a decision of public cloud, private cloud, hybrid cloud, in that case, it almost seems like there has to be a workload rationalization effort that says, for a big data application, the big data appliance really works well for me.

So as infrastructure architects, as you say, we have to up our game. Modern Datacenter Architecture Patterns–Hybrid Networking - Building Clouds Blog. This document provides an overview of Microsoft Azure networking capabilities for hybrid environments. 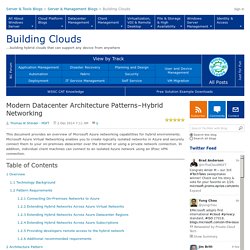 Microsoft Azure Virtual Networking enables you to create logically isolated networks in Azure and securely connect them to your on-premises datacenter over the Internet or using a private network connection. In addition, individual client machines can connect to an isolated Azure network using an IPsec VPN connection. Table of Contents 1 Overview 1.1 Technology Background 1.2 Pattern Requirements. DoD Cloud Computing Strategy Final with Memo July 5 2012. Designing Your Cloud Infrastructure. Many network architectures include a tiered design with three or more tiers such as core, distribution, and access. 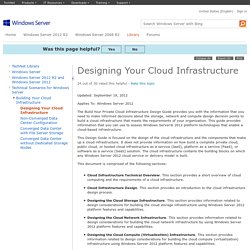 Designs are driven by the port bandwidth and quantity required at the edge, in addition to the ability of the distribution and core tiers to provide higher speed uplinks to aggregate traffic. Additional considerations include Ethernet broadcast boundaries and limitations, spanning tree or other loop-avoidance technologies. A dedicated management network is a frequent feature of advanced data center virtualization solutions. Most virtualization vendors recommend that hosts be managed via a dedicated network so that there is no competition with tenant traffic and to provide a degree of separation for security and ease of management purposes. This historically implied dedicating a network adapter per host and port per network device to the management network. Managing the network environment in a private cloud can present challenges that must be addressed.