Homeless Man Gets To Live In A 3D-Printed Tiny Home. 70-year-old Tim Shea has come a long way since his days as a homeless heroin addict. 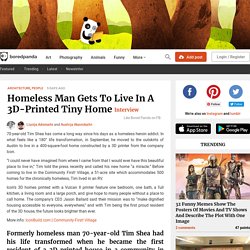 In what feels like a 180° life transformation, in September, he moved to the outskirts of Austin to live in a 400-square-foot home constructed by a 3D printer from the company Icon. “I could never have imagined from where I came from that I would ever have this beautiful place to live in,” Tim told the press recently and called his new home “a miracle.” Archi-Union uses "cyborg fabrication" to build Venue B conference centre. 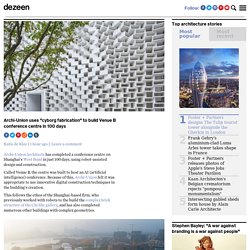 Called Venue B, the centre was built to host an AI (artificial intelligence) conference. Because of this, Archi-Union felt it was appropriate to use innovative digital construction techniques in the building's creation. This follows the ethos of the Shanghai-based firm, who previously worked with robots to the build the complex brick structure of the Chi She gallery, and has also completed numerous other buildings with complex geometries.

Venue B features some of the most lightweight structures available in modern buildings, thanks to the combination of algorithms used in the planning stages and prefabricated construction methods. The complex consists of three conference venues that sit at slightly rotated angles to each other. The joints in the roof are formed of hollow aluminium structures that further reduce its weight. US military 3D prints concrete barracks on site. In a world first, the US Armed Forces has 3D printed a barracks out of concrete on site at an army base, in less than two days. 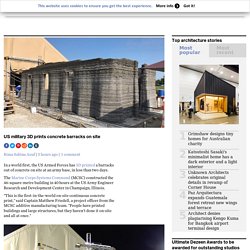 The Marine Corps Systems Command (MCSC) constructed the 46-square-metre building in 40 hours at the US Army Engineer Research and Development Center in Champaign, Illinois. "This is the first-in-the-world on-site continuous concrete print," said Captain Matthew Friedell, a project officer from the MCSC additive manufacturing team. "People have printed buildings and large structures, but they haven't done it on-site and all at once. " 3D printing project aimed at revolutionizing low-cost housing. A collaboration between housing non-profit New Story and construction technology firm Icon aims to use 3D printing technology to house the homeless. 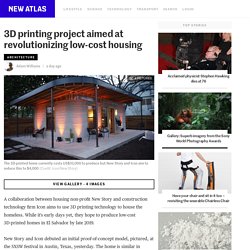 While it's early days yet, they hope to produce low-cost 3D-printed homes in El Salvador by late 2019. New Story and Icon debuted an initial proof-of-concept model, pictured, at the SXSW festival in Austin, Texas, yesterday. The home is similar in nature to the Apis Cor house and measures just 350 sq ft (32 sq m). Zurich researchers start work on digitally fabricated DFAB House.

We've seen quite a few building projects recently that make use of robots or 3D printing tech, or both, but a bunch of professors from ETH Zurich are attempting to make the whole design and build process digital. 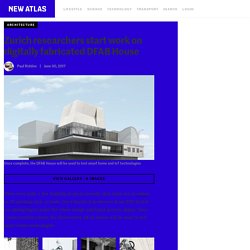 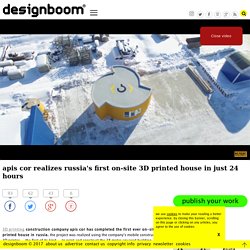 3D printing Martian habitats from the ground up. Given the cost of transporting goods to Mars, the first human colonists of the Red Planet will need to pack lightly – but it's going to take a lot of equipment to get that settlement set up. 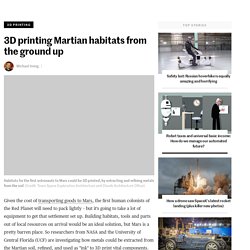 Building habitats, tools and parts out of local resources on arrival would be an ideal solution, but Mars is a pretty barren place. So researchers from NASA and the University of Central Florida (UCF) are investigating how metals could be extracted from the Martian soil, refined, and used as "ink" to 3D print vital components. NASA has already outlined its roadmap to getting humans to Mars, which involves studying what kind of resources that the first settlers could harvest from the planet. The less we need to cart from Earth, the better, with the agency saying that finding ways to live off the land could save over US$100,000 per kilogram (2.2 lb) per launch.

It's known as in situ resource utilization, and that's the goal of this new project. World's first 3D-printed office building completed in Dubai. 3D printing technology promises to revolutionize architecture in the near-future, allowing designers to literally click-and-print complex buildings at a lower cost and faster speed than traditional construction methods allow. 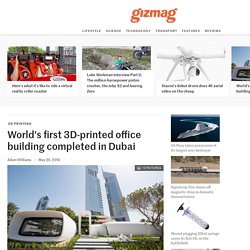 Another step forward in the field comes via Dubai, where what's hailed as the world's first 3D-printed office was recently completed. We first reported on what's now dubbed the Office of the Future back in 2015. Taking up a footprint of 250 sq m (2,690 sq ft), the building is located within Dubai's Emirates Towers complex and will serve as a fully-functional office. World's largest delta 3D printer could build entire houses out of mud or clay. WASP (World's Advanced Saving Project) is set to unveil Big Delta, reportedly the world's largest delta 3D printer, later this week. 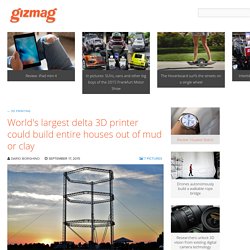 This 12-meter (40 ft) tall behemoth was brought to life with the purpose of building nearly zero-cost housing through the use of local materials and as little energy as possible, offering quick and inexpensive relief to disaster areas and addressing the future housing needs of a rapidly growing world population. Building houses quickly and on a very tight budget through additive manufacturing, be it on Earth on another planet entirely, is a very interesting proposition for more than one good reason. In space, this would afford us huge amounts of design flexibility, giving way to unusual but highly functional structures that simply couldn't be assembled any other way. Cheap and quick to build housing units could also be a good fit for, among other things, bringing quick relief to areas hit by natural disasters like earthquakes, tornadoes and floods.

3D-printed Mars shelter concept is out of this world. Though the field is still relatively new, 3D-printed architecture could prove a real boon to potential Mars colonizers. 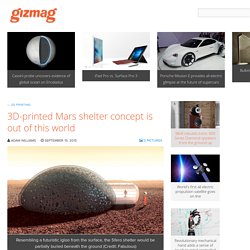 Inspired by NASA's competition seeking ideas for potential 3D-printed Mars habitats, French firm Fabulous has designed a conceptual shelter, dubbed Sfero, that would be 3D-printed on the Red Planet using locally-available materials. Resembling a futuristic igloo from the surface, the Sfero shelter would be partially buried beneath the ground. Access to the shelter would be gained by its one long corridor, which contains an airlock. The interior comprises three floors. The uppermost floor, which looks more like a mezzanine, measures just 3 sq m (32 sq ft), and is given over totally to growing foodstuffs, while the next floor down measures 29 sq m (312 sq ft) and comprises a work area and bathroom. World's first 3D-printed office building to go up layer by layer in Dubai. Already home to numerous architectural wonders, including the world's tallest building, Dubai is set to add the world's first 3D-printed office building to its streets.

It will be printed layer by layer by a 3D printer standing 20 ft (6 m) tall, with the layers to be assembled on site to produce a building covering approximately 2,000 sq ft (186 sq m) in a process that is set to take a matter of weeks. The office building, which wouldn't look out of place in a 1970's science fiction show set in the present day, will serve as a temporary headquarters for staff of the nearby "Museum of the Future" that launched earlier this year. As such, it won't be quite as intricate as some other 3D-printed architecture we've seen, but will feature a flexible open plan to accommodate a range of uses and team sizes.

MX3D gets go-ahead for 3D-printed bridge in Amsterdam. Gizmag has covered a wealth of remarkable architectural projects involving 3D printing – including a backyard castle, a number of small homes and a room with 260 million surfaces – but a project in Amsterdam, Netherlands, is set to be particularly impressive. 3D printing R&D firm MX3D is planning to print a bridge across a canal. It is hoped that the robots used will print their own supports and gradually move across the water, creating the bridge as they go.

The project is a collaboration with, among others, design software company Autodesk and construction firm Heijmans and will incorporate robotics, software engineering, craftsmanship and design. Designer Joris Laarman, who has previously worked with MX3D printing free-standing 3D sculptures, is using Autodesk software to design what is described as "an ornate metal bridge. " "I strongly believe in the future of digital production and local production, in the new craft," says Laarman. Source: MX3D, Joris Laarman Studio. This Controversial Chinese Company Wants To 3-D Print Your Next House. SUZHOU, China -- Walking through WinSun’s show lot in the Suzhou Industrial Park, one gets a glimpse of the past and possible future of building construction.

Views from the fifth story of a boxy concrete structure reveal a horizon typical of the outskirts of Chinese cities today: Clusters of construction cranes surround high rises sprouting from rice fields. Streams of trucks flow to and from these construction sites, carrying in the raw ingredients of China’s construction industry -- migrant workers, steel and lots of cement -- and departing with loads of wood scraps and building waste. It’s a model that has fueled the largest urbanization and housing boom in history, while also helping pollute China’s skies and deplete its natural resources.

WinSun (Chinese name: Yingchuang) says it wants to overturn that model. That boxy concrete structure isn’t made of the usual blend of ingredients. WinSun’s 3-D printed structures have attracted equal parts buzz and controversy. These buildings were created with a 3D printer. It might not exactly sound appealing to live in, but a Chinese company has constructed two buildings using a 3D printer that recycles industrial waste to form new building material. Shanghai-based Winsun has been showing off the two neighboring projects, one an 1100-square-meter villa, the other a 6-story residential block, in the Chinese city of Suzhou.

The residential block is the world’s tallest 3D-printed building, according to the company. It took Winsun a day to print out one level of the residential block, and then five more to put the level together. As for the villa, both the interior and exterior of the home were created using the company’s 3D printing tech. (More pictures can be found here.) Michael Kan Winsun was founded in 2002, and specializes in 3D printers designed for construction. The company’s printers are 6.6 meters tall, and work by secreting layers of construction material on top each other to form densely packed building blocks. Loughborough University researchers unveil plans to commercialize 3D concrete printing. Following our recent report of a Chinese company printing 10 houses in a day, the potential for architects to essentially click-and-print complex large-scale projects on a regular basis has moved a step closer to reality.

This week, the UK's Loughborough University announced a deal with construction company Skanska and architecture firm Foster + Partners to develop and commercialize 3D concrete printing. View all The researchers at Loughborough's School of Civil and Building Engineering have been developing 3D concrete printing technology with a view to commercialization for seven years now, and have refined their technique to a system that comprises a gantry and robotic arm – the latter now in its second generation of development.

Much like Andrey Rudenko's 3D concrete printer, Loughborough's device extrudes cement-based mortar under very precise computer control into layers, in order to create building components, which are then joined together. Sources: Skanksa, Loughborough University. ESA explores the concept of a 3D-printed moonbase. The European Space Agency (ESA) is currently exploring the possibility of establishing a permanent lunar base with the aid of 3D printing technology.