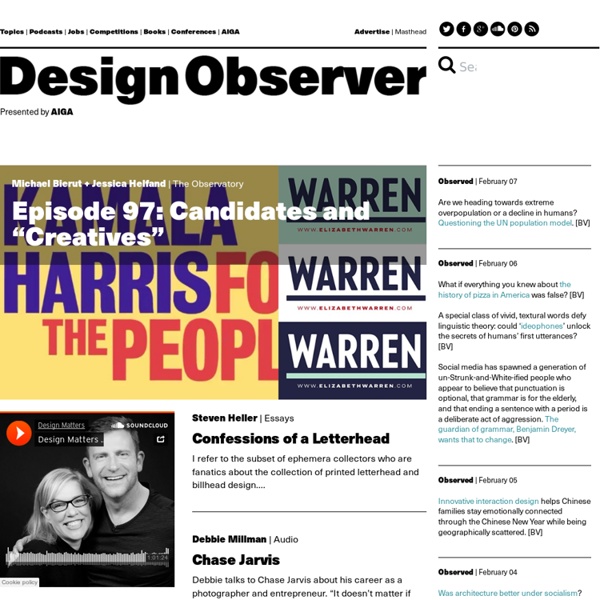 Observatory By Manuela AguirreDesign for Care: Innovating Healthcare Experience, is one of the first books fully dedicated to health care design and comes at a critical moment given the degree to which design is starting to be acknowledged as a legitimate profession within the context of health care institutions. Places Nicole Huber & Ralph Stern Born in Germany in 1945, just months after the end of World War II, the film director Wim Wenders sought to make sense of the "ruin landscapes" of the nation's cities through personal and professional exploration of the wide-open landscapes of the American West. As Nicole Huber and Ralph Stern write, "The American West — and the American Western — served a specific and telling purpose for the postwar German West: to envision both traumatic upheaval and utopian projection."

VC blog Posted: November 26th, 2014 | Author: Manuel Lima | Filed under: Uncategorized | No Comments » As some attentive users of Visual Complexity might have noticed, the number of projects featured on the website has slowly come to a halt, with the perpetual grand total of 777 being a grieving reminder of inactivity for well over a year. Today, If you go the the main page and look at the top right corner, you will see an invigorating new message: “Indexing 782 projects”. Of course I didn’t want to write this blog post to announce that five new projects have been added to the database.

Cliff Pickover's RealityCarnival April 1st Submit a Link (04/01/13) "If someone gave you the entirety of Wikipedia from 100 years in the future for 10 minutes, what would you read?" (03/31/13) The broken walls of fractaloid Carthage, in the math-encrusted city beyond your dreams.

Friday Fun: useless or not so designs? You decide Fun | August 6, 2010 2:05 PM | Leave a Comment We've picked up a few designs from the surrounding blogosphere for you have a laugh or to admire or both or neither. Maybe useless maybe not, you decide... Tags: The Book Bench: Comic, Sans Appeal The war on Comic Sans continues with the latest salvo fired across the pond by the Guardian. There, Dan Hancox argues that there are more important issues to worry about than a font. Indeed. And yet I can’t help but leap into the fray. Comic Sans is, let’s be honest, aesthetically null.

Design inspiration from around the world 100/100 by SB Studio 100/100 is an exhibition of 100 beer labels designed by 100 contributors. Curated by SB Studio in aid of Art Fund. “In early 2013 we set about planning a series of not-for-profit projects that challenge the norm. ClickZ - News and expert advice for the digital marketer since 1 The importance of headlines should never be overlooked, a little time spent finding the right headline can make a lot of difference. A good headline means more people will click on your article wherever they see it, it ensures that the effort you spent in writing an article doesn’t go to waste, and it can also help your content to be picked up by search engines in the weeks and months after publishing. Here are a few areas to think about when writing headlines.

Jun Mitani Is A Paper Magician: Constructing Unbelievable Origami Forms From Torafu Architects’ 2D to 3D pop-up paper vases to Josh Ritter’s 12,000-piece cut and paste music video, paper remains one of the oldest and most diversely applied materials for creative expression. Today, we explore the wafer-thin constructions of Japanese computer scientist Jun Mitani. From his first intrigues with paper design to his inimitable collaboration with fashion designer Issey Miyake, the 3D origami craftsman explains his trials and triumphs with paper.

Why I love The Song "Powerhouse" “Powerhouse” is a 1937 instrumental musical composition by Raymond Scott, probably best known today as the iconic “assembly line” music in Warner Bros. animated cartoons. In posterity it is by far the most famous of Scott's compositions, but in its time it wasn't as popular as his “The Toy Trumpet” nor as frequently recorded by other artists as “Twilight in Turkey.” In scripted comments read on the First Anniversary Special of CBS Radio's Saturday Night Swing Club, on which the Raymond Scott Quintette performed, announcer Paul Douglas indicates that “Powerhouse” was first premiered on that program sometime in January or early February 1937. Scott's Quintette (actually a sextet) first recorded "Powerhouse" in New York on February 20, 1937, along with three other titles. It was first commercially released on the Irving Mills-owned Master Records label as Master 111 (mx. M-120-1) and coupled with another Scott composition, “The Toy Trumpet.”

Why Design-By-Committee Should Die - Smashing Magazine Advertisement No matter where you go in the known universe, there is design-by-committee. It has become a pecking order of disaster for the society that used to pride itself on being a mover and shaker and that allowed its mavericks and dreamers to innovate their way to success. In a business climate fueled by fear and the “Peter Principle,” as it is today, a decision not made is a tragedy averted.