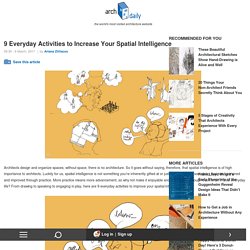 So it goes without saying, therefore, that spatial intelligence is of high importance to architects. Luckily for us, spatial intelligence is not something you’re inherently gifted at or just “born with,” it’s something that can be trained and improved through practice. More practice means more advancement, so why not make it enjoyable and easy—easy enough even to do in your everyday life? From drawing to speaking to engaging in play, here are 9 everyday activities to improve your spatial intelligence. 1. Some studies indicate that exposing children to a wide variety of spatial vocabulary increases their spatial intelligence.[1] Instead of using “here” or “there” in your everyday language, try being more specific in your spatial descriptions, such as “on the top shelf of the cupboard to the right,” or “the third to the left behind the box”. 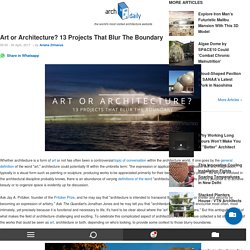 13 Projects That Blur The Boundary Whether architecture is a form of art or not has often been a controversial topic of conversation within the architecture world. If one goes by the general definition of the word "art," architecture could potentially fit within the umbrella term: "the expression or application of human creative skill and imagination, typically in a visual form such as painting or sculpture, producing works to be appreciated primarily for their beauty or emotional power. " As anyone involved in the architectural discipline probably knows, there is an abundance of varying definitions of the word "architecture," so whether its primary purpose is to achieve beauty or to organize space is evidently up for discussion. 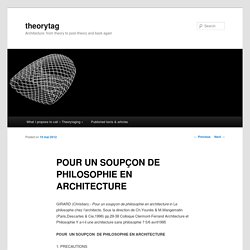 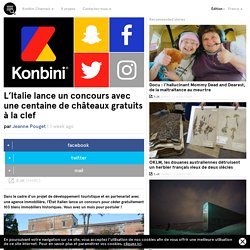 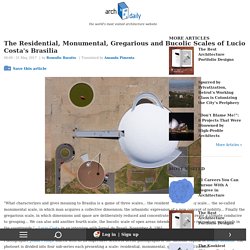 Finally the gregarious scale, in which dimensions and space are deliberately reduced and concentrated in order to create a climate conducive to grouping... We can also add another fourth scale, the bucolic scale of open areas intended for lakeside retreats or weekends in the countryside. " - Lucio Costa in an interview with Jornal do Brasil, November 8, 1961. Photographer Joana França shared with us an impressive series of aerial photographs of the national capital of Brazil, Brasilia. The photoset is divided into four sub-series each presenting a scale: residential, monumental, gregarious and bucolic. Volubilis Visitor Center / Kilo Architectures. Volubilis Visitor Center / Kilo Architectures Architects Location Architects Kilo Architectures Structural Engineers TESCO Client Ministère de la Culture Area 4200.0 sqm Project Year 2011 Photographs From the architect. 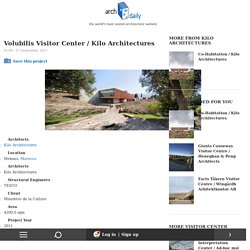 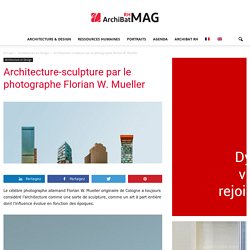 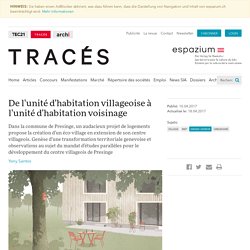 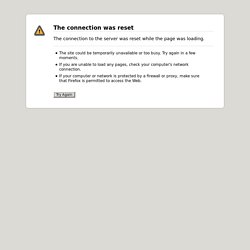 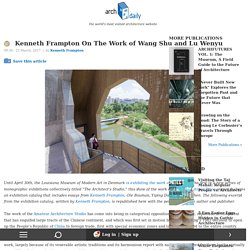 Rafael Aranda, Carme Pigem and Ramon Vilalta founded their office in the small town of Olot almost 30 years ago, and most of their work for the past three decades have been built in the surrounding regions of Catalonia. As the Pritzker jury has pointed out, one of their greatest qualities is their ability to show how architects can have "our roots firmly in place and our arms outstretched to the rest of the world.

Louis Church in Paimboeuf, France. As it carefully navigates around the church’s arches and pendentives, the drone captures the space in a distinctly golden light, giving viewers up-close looks at the bold colors and flamboyant ornamentation for which the neo-Byzantine style is recognized. The video takes its name, “Byzantine,” from the church’s distinctive architecture style, though having been completed in 1913, the design actually belongs to the Byzantine Revival period that took place in the late 19th century, long after the fall of the Byzantine Empire.

How Architecture Is Born: 7 Parallel Perspectives by OPEN Architecture and the Buildings They Helped to Shape. These days, renders tend to dominate the portfolios of contemporary architectural studios around the world, backed up by the traditional tripartite of plans, sections, and elevations. Given the advancement of rendering software, graphics cards, and processing power, it is, perhaps, unsurprising that these computer-generated images are now a priority as architects attempt to convince their clients with carefully selected perspectives that show a proposal at its best.

However, Li Hu of OPEN Architecture utilizes a very different style of drawing: one that communicates scale, form, and the relationship between buildings with a crisp, clean clarity. Free: 12 Common Construction Details Fully Modeled in SketchUp. Great architecture is nothing without carefully considered details, and no one understands this better than the architects and engineers of the International Masonry Institute (IMI). That’s why they have created an extensive series of typical construction details, each fully modeled and freely available to download from SketchUp’s 3D Warehouse. IMI’s collection includes many common connection details between two or more architectural elements — walls, roofs, floors and so on — so crucial in ensuring a building envelope is waterproof and well-insulated with clean, aesthetically pleasing finishes. Adam Caruso: "Fashion is the Opposite of Architecture" Adam Caruso: "Fashion is the Opposite of Architecture" The tragedy of architecture is how stupid architects are... we spend too much time trying to convince people to do things they don’t want to do.

That really lowers the level of the discussion, I think. In this video from the Louisiana Channel, Canadian architect Adam Caruso, founding partner of London-based Caruso St John, provides his take on the current climate of the architectural profession and the influences driving his own personal architectural philosophy. With his firm, Caruso has led the design of numerous art institutions, including the 2016 RIBA Stirling Prize winning Newport Street Gallery in London, that respond to “a deeper idea of place, of the history and culture of the place and how you read it today.

12 Classic Koolhaas Quotes. Adam Caruso. For Adam Caruso architecture is a cultural practice, a question of making buildings that are connected to the history of architecture and “a deeper idea of place, of the history and culture of the place and how you read it today.” His style contrasts many contemporary architects whose buildings, in Caruso’s opinion, represent “a kind of abstraction that becomes more and more reduced of energy and any kind of relevance.”

These miniature stand-ins for human life not only bring scale and understanding to a sketch, they also offer a glimpse into the architect’s personality. Some designers automatically go for realistic, anatomically correct people, while others have more abstract interpretations of the human body. Free Online Architecture Courses From World-Class Universitites. Free Online Architecture Courses From World-Class Universitites Thinking of continuing your studies but don't want to start a master's or a doctorate just yet?

Around the world, short-term courses taken remotely are increasingly popular alternatives, and platforms such as edX, created by Harvard and MIT Universities make it even easier to dive deeper into the most diverse topics. Of course, for long-term and undergraduate courses, the face-to-face experience cannot be replaced by online classes. However, being able to follow lessons and participate in discussions with people from around the world online is definitely an important advantage offered by the internet. We have compiled a few courses in areas ranging from video game design to bio-cellular engineering, and from the history of Japanese architecture to courses in architectural imagination. Opinion: What’s Wrong With Shipping Container Housing? Everything.