A Daily Dose of Architecture 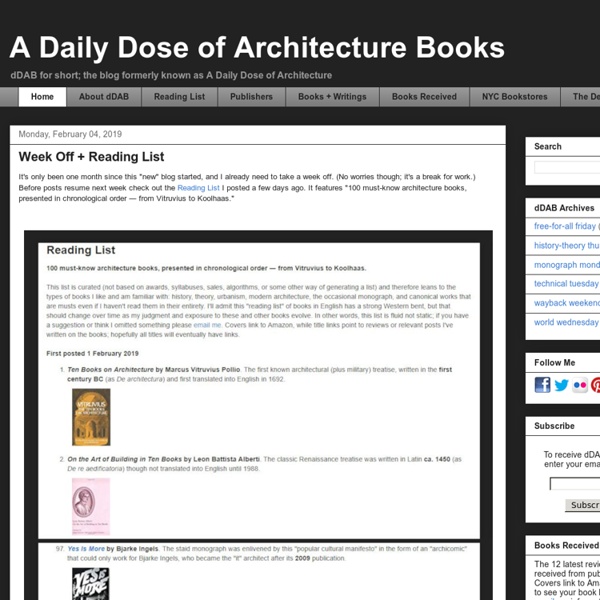 [Conflict Space, 2006 – All photos of the exhibition at The Drawing Center by John Hill.] There is something appealing about cycles, about the sun rising and setting, the changing of the seasons, the earth rotating about its axis as it revolves around the sun, even the way some of the best narratives seem to come full circle on themselves. The life of Lebbeus Woods (1940-2012) is a remarkable cyclical composition when seen relative to the oldest and most recent pieces in the exhibition Lebbeus Woods, Architect, opening today at The Drawing Center in SoHo. First is Einstein Tomb, which was published as Pamphlet Architecture #6 (the long out-of-print title is available at The Drawing Center as part of the exhibition) in 1980. [Einstein Tomb, 1980] Through words and drawings Woods speaks in PA#6 about Einstein's world-changing view of the universe as "a warp of finite duration and boundary yet of infinite renewal and continuity."

Brooks + Scarpa Architects - Santa Monica - Architects Brooks + Scarpa has redefined the role of the architect and results in some of the most remarkable and exploratory design today. We do so by looking, questioning and reworking the very process of design and building. Each project appears as an opportunity to rethink the way things normally get done; to redefine and identify latent potential that exists inmaterials, form, construction and even financing—to, as Lawrence Scarpa says, make the “ordinary extraordinary.” This produces entirely inventive work that is quite difficult to categorize because it is driven by exploration rather than an initial intent. It is environmentally sustainable, but not about ‘sustainable design.’ It employs new materials, digital practices and technologies, but is not defined by nor molded by technologies.

Exploration Architecture philosophy - Exploration Architecture Innovating and collaborating to address the major challenges of our age We use biomimicry to develop new strategies, to radically rethink existing building types and devise a completely new approach to the design process. Biomimicry is a rapidly emerging discipline that learns from the remarkable catalogue of solutions to be found in biology – all of which have been refined by 3.8 billion years of evolution. Whereas sustainable development has often been based on mitigating negatives, biomimicry represents a new paradigm and reveals solutions that go beyond ‘sustainable’ to be restorative and deliver net positive impacts. We have successfully worked with a wide range of organisations to help them succeed in the shift that is already underway - from the industrial age to the ecological age of humankind. Frequently our projects achieve substantial resource savings and reveal major commercial opportunities for our clients.

About Spatial Agency is a project that presents a new way of looking at how buildings and space can be produced. Moving away from architecture's traditional focus on the look and making of buildings, Spatial Agency proposes a much more expansive field of opportunities in which architects and non-architects can operate. It suggests other ways of doing architecture. In the spirit of Cedric Price the project started with the belief that a building is not necessarily the best solution to a spatial problem. The project attempts to uncover a second history of architecture, one that moves sharply away from the figure of the architect as individual hero, and replaces it with a much more collaborative approach in which agents act with, and on behalf of, others. Although Spatial Agency started out as a critique of the conservative tendencies of mainstream practice, it ended up as a celebration of the bravery, canniness and optimism of an inspiring group of historical and contemporary figures.

Augmented Reality and Assistive Technology Lab, Singapore Augmented Reality AR AR is a novel form of human-machine interaction that overlays computer-generated information on the real world environment. It enhances the existing environment rather than replacing it as in the case of virtual reality. AR in Manufacturing The application of AR technologies to simulate and improve these manufacturing processes before they are carried out is an innovative and effective approach. Research on the manufacturing applications of AR is a strong and growing area. InBetween House House Karuizawa, Japan Koji Tsutsui & Associates, Tokyo, Japan 2011 World Architecture Festival 2011 - Category Winner South Elevation: Cottages & Thin Folding RoofIwan Baan The client chose a sloped site surrounded by Japanese larch trees in a mountainous region of Karuizawa, Japan, (an hour commute away from Tokyo on a bullet train) as the ideal location for their home.

Creative Design in Industry and Architecture Authors: G. Berkin and O. Kucukerman, Halic University Faculty of Architecture, Turkey Covering the topics of architecture and industrial design Creative Design in Industry and Architecture argues that the discourse on design criteria for both professions share many similarities. It is not intended to be prescriptive, but is rather the outcome of a detailed design analysis of the works of a number of industrial and architectural designers. Keynote Speakers Symposium Keynote Speakers Jan Knippers, Knippers Helbig Advanced Engineering Jan Knippers, Prof. Dr.