Could 'dome homes' be the future of reducing disaster risk? The next time a big storm rolls over the Philippines, at least one city hopes to be prepared. 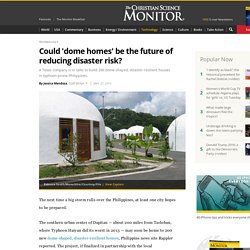 The southern urban center of Dapitan — about 200 miles from Tacloban, where Typhoon Haiyan did its worst in 2013 — may soon be home to 200 new dome-shaped, disaster-resilient houses, Philippine news site Rappler reported. The project, if finalized in partnership with the local government, will use technology developed by a Texas company that specializes in homes able to withstand storms, fires, earthquakes, and other disasters. The effort mirrors a broader shift around the world, as governments, international organizations, and communities turn from merely reacting to calamities and disasters toward managing them before they occur. “Lives can be saved by advance planning — and by building schools, homes, hospitals, communities and cities to withstand hazards,” United Nations secretary-general Ban-Ki Moon said in 2011.

David B. It is also energy efficient and “will last for centuries,” Mr. Resilience. UN-Habitat’s goal is to increase the resilience of cities to the impacts of natural and human-made crises. 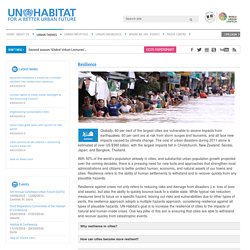 In order to achieve this, UN-Habitat launched the City Resilience Profiling Programme (CRPP) to support local governments to build their capacity to improve resilience by developing a comprehensive and integrated urban planning and management approach, and tools for measuring and profiling city resilience to all types of hazards. A City Resilience Profile is a baseline assessment of a city-system’s ability to withstand and recover from any plausible hazard.

The Programme is implemented through partnerships with primary stakeholders, including international agencies, academic and research institutes, private sector actors, NGOs, and representatives from a number of partner cities around the world. Find out more about the City Resilience Profiling Programme. UNISDR Chief visits Bangladesh cyclone belt. Margareta Wahlström, UNISDR Chief and Special Representative of the Secretary-General for Disaster Risk Reduction, shakes the hand of a child in Bainpara, BangladeshBy Brigitte Leoni BANGKOK, 2 April 2012 - A visit to a disaster-resilient habitat in Bangladesh has prompted UNISDR Chief Margareta Wahlström to acknowledge the south Asian country as leading developing nations in the global fight against climate change impacts. 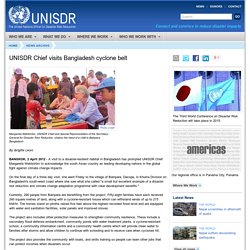 On the final day of a three day visit, she went Friday to the village of Bainpara, Dacope, in Khulna Division on Bangladesh's south-west coast where she saw what she called "a small but excellent example of a disaster risk reduction and climate change adaptation programme with clear development benefits. " Currently, 290 people from Bainpara are benefitting from the project. Fifty-eight families have each received 240 square metres of land, along with a cyclone-resistant house which can withstand winds of up to 215 KM/hr. The UNISDR head also met with Dr. UNDP: Empowered Lives. Resilient Bangladesh. by UNDP Bangladesh. Years of the floods: building homes to withstand the weather – in pictures.

Vo Trong Nghia. Shigeru Ban. Can a House Be Typhoon-Proof and Earthquake-Proof at the Same Time? Typhoon-proof disaster relief housing manufacturin. Summary After typhoon Haiyan there was no more food, drinkable water or houses. 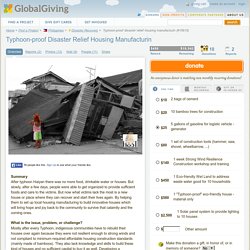 But slowly, after a few days, people were able to get organized to provide sufficient foods and care to the victims. But now what victims lack the most is a new house or place where they can recover and start their lives again. By helping them to set up local housing manufacturing to build innovative houses which will bring hope and joy back to the community to survive that calamity and the coming ones. MAT-TER designs typhoon-resistant school for the Philippines. In recent years, Gizmag has reported on several architectural projects which aim to aid those living in areas prone to natural disaster, including the Bamboo Lakou community and Blooming Bamboo home. 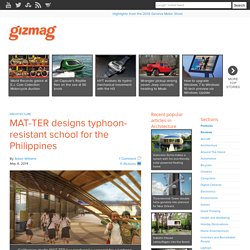 Californian studio MAT-TER is the latest firm to throw its hat in the ring, with a modular, passively-cooled, and typhoon-resistant school that's due to be constructed in the Philippines later this year. View all The project was conceived during a competition to create a new Guiuan National High School following its destruction last year at the hands of Typhoon Haiyan – a disaster which sadly also destroyed over 4,500 other schools in the area. Unique Bamboo Living Pod Concept is a Study in Disaster Proof Design DAtE Green Design Award - Gallery Page 1. The Bamboo Revival: Green Structures. Steel-reinforced concrete is the most common building material in the world. 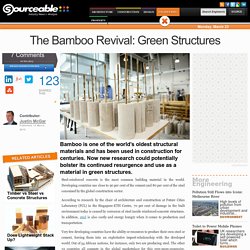 Developing countries use close to 90 per cent of the cement and 80 per cent of the steel consumed by the global construction sector. According to research by the chair of architecture and construction at Future Cities Laboratory (FCL) in the Singapore-ETH Centre, 70 per cent of damage in the built environment today is caused by corrosion of steel inside reinforced concrete structures. In addition, steel is also costly and energy hungry when it comes to production and transportation. Very few developing countries have the ability or resources to produce their own steel or cement, forcing them into an exploitative import-relationship with the developed world. Out of 54 African nations, for instance, only two are producing steel. How bamboo could help build a sustainable future. Researchers from Trinity College Dublin's School of Engineering believe that bamboo could be used to build many things from bicycles to houses in the not-too-distant future. 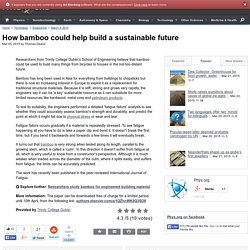 Bamboo has long been used in Asia for everything from buildings to chopsticks but there is now an increasing interest in Europe to exploit it as a replacement for traditional structural materials. Because it is stiff, strong and grows very rapidly, the engineers say it can be 'a key' sustainable resource as it can substitute for more limited resources like hardwood, metal ores and petroleum products. To test its suitability, the engineers performed a detailed 'fatigue failure' analysis to see whether they could accurately assess bamboo's strength and durability, and predict the point at which it might fail due to physical stress or wear and tear. Fatigue failure occurs gradually if a material is repeatedly stressed. Disaster-Proof Architecture: 13 Super-Strong Structures. High-profile earthquakes, tsunamis, floods, hurricanes and other natural disasters have made it more clear than ever that in the face of climate change, stronger buildings able to withstand such events are not just advisable but necessary. 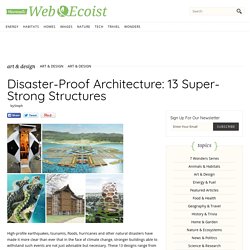 These 13 designs range from fantastical concepts for entire floating cities to real homes that have already proven themselves disaster-proof, and from large-scale billion-dollar projects to low-cost housing solutions for the poor. Earthquake-Proof ‘Coral Reef Island’ for Haiti (images via: vincent callebaut) Building a Disaster Resistant Future. Be wary of anyone who promises disaster-proof construction. 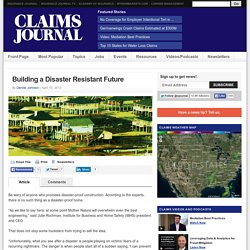 According to the experts, there is no such thing as a disaster-proof home. “As we like to say here, at some point Mother Nature will overwhelm even the best engineering,” said Julie Rochman, Institute for Business and Home Safety (IBHS) president and CEO. That does not stop some hucksters from trying to sell the idea. Bamboo "will replace other materials" says Vo Trong Nghia. Bamboo architects: bamboo is the "green steel of the 21st century," according to Vietnamese architect Vo Trong Nghia, one of the leading exponents of bamboo architecture (+ interview + slideshow). 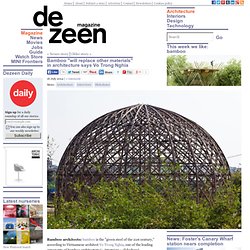 Dezeen spoke to Nghia as part of a series of articles about bamboo architecture we're running this week, following a surge in the number of projects employing the material. Earlier this week Vo Trong Nghia Architects unveiled designs for the Vietnamese pavilion at Milan Expo 2015, which will be constructed from bamboo, while China-based architects Penda proposed a high-rise hotel built from the material. "I think bamboo and laminated bamboo will replace other materials and become the 'green steel' of the 21st century," said Nghia. Bamboo Forest - Architecture by Thibaut Deprez. Skyscrapers and Scaffoldings in Symbiosis Designer Thibaut Deprez was uninspired by the harshness and coldness of urban architecture, which can be repetitive and lacking personality with stacks upon stacks of identical stories. His solution? Bamboo engineering. A group of researchers at the Masssachusetts Institute of Technology (MIT) are testing new ways to use bamboo in engineering building materials in a manner akin to wood composites such as plywood, orientated strand board (OBS) and glue-laminated timbers.

Traditionally, when bamboo is used in construction, either the whole stalk is utilised in a lattice fashion (to make scaffolding, for example) or strips of the stalk are woven together to create screens or mats. But the MIT researchers are applying bamboo in a different way. The idea is that a stalk, or culm, can be sliced into smaller pieces, which can then be bonded together to form sturdy blocks. A structural product of this sort could be used to construct more resilient buildings – particularly in places such as China, India and Brazil, where the fast-growing grass is abundant.

Scientists identify new species of bamboo coral. Scientists have identified seven new species of bamboo coral discovered thousands of metres below the ocean surface, officials said today. The coral was discovered among the islands of Papahanaumokuakea marine national monument in Hawaii using a submersible research vessel in 2007. Richard Spinrad, the National Oceanic and Atmospheric Administration's assistant administrator, said the discoveries are important because deep-sea corals support diverse sea floor ecosystems, "and also because these corals may be among the first marine organisms to be affected by ocean acidification".

Bamboo + Scale – Bamboo Weighing Scale by Lei Shi and Yujie Hong. Wooden Weight Calculator. Are Bamboo Products The Future of Retail? The Future of Bamboo in Retail: Can it Replace Plastic? Build it yourself at the UK's first bamboo bike workshop. What's stopping the bamboo bike from shooting into the mainstream. From bamboo bikes to renewables: the leaders that understand sustainability. The business leaders of tomorrow will be responsible for tackling huge challenges, from climate change to growing inequality. On the road: Bamboo Mountain Bike. Taking a bike on a train in Britain is never a life-affirming experience, especially when travelling with Virgin. All those carriages, all those empty first-class seats, and still they can find space for only two piddling bicycles. And bagging one of those spots is needlessly complicated, too. Modular bamboo tent hotel stacks up vertically. John Hardy: My green school dream.

Notes and queries: Did the Romans build their aqueduct with bamboo? Will the human race always need God? The Romans built a 50km aqueduct from Uzès to Nîmes in France with an overall fall of about 17 metres and an average gradient of 1/3000. Pandas at risk in bamboo crisis. Bamboo species at risk of extinction. The ethical wardrobe: Is bamboo an ethical fabric? Anatomy of a garden: A bamboo garden, Provence, France. Ethiopia leads the bamboo revolution. The Classic Fly Rod Forum. Creating a bamboo future together. Can bamboo save the world? Building the future of sub-saharan Africa with bamboo!