National Geographic unveils Travel Photographer of the Year winners - CBC News - Latest Canada, World, Entertainment and Business News. Subhas Chandra Bose - Wikipedia. Subhas Chandra Bose (23 January 1897 – 18 August 1945)[a] was an Indian nationalist whose defiant patriotism made him a hero in India,[b][c][6][d] but whose attempt during World War II to rid India of British rule with the help of Nazi Germany and Imperial Japan left a troubled legacy. 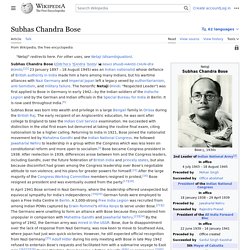 [e][f][g] The honorific Netaji (Hindustani: "Respected Leader"), first applied in early 1942 to Bose in Germany by the Indian soldiers of the Indische Legion and by the German and Indian officials in the Special Bureau for India in Berlin, was later used throughout India. [h] Bose had been a leader of the younger, radical, wing of the Indian National Congress in the late 1920s and 1930s, rising to become Congress President in 1938 and 1939. [i] However, he was ousted from Congress leadership positions in 1939 following differences with Mahatma Gandhi and the Congress high command. Cannes 2017: 'The Square' skewers art world in Palme d'Or-winning satire - CNN. "Garbage," we hear from the audience. 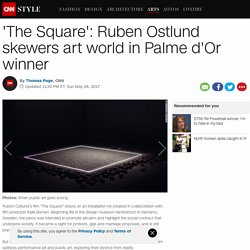 "Go home. " Every attempt by the artist to outline his work is punctuated with an insult. Sal Mineo: Muses, Cinematic Men. The young actor with a Sicilian background made his stage début in New York, in 1950, in The Rose Tattoo before starring in The King and I, in 1951, opposite Yul Brynner who became a mentor. 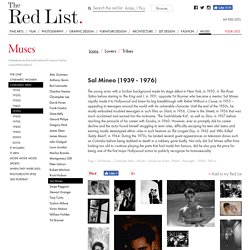 Sal Mineo rapidly made it to Hollywood and knew his big breakthrough with Rebel Without a Cause, in 1955 – appealing to teenagers around the world with his vulnerable character. Until the end of the 1950s, he mostly embodied troubled teenagers in such films as Giant, in 1956, Crime in the Streets, in 1956 that was much acclaimed and earned him the nickname, 'The Switchblade Kid', as well as Dino, in 1957 before reaching the pinnacle of his career with Exodus, in 1960. However, ever so promptly did his career decline and the actor found himself struggling to earn roles, difficultly escaping his teen idol status and earning mostly stereotyped ethnic roles in such features as The Longest Day, in 1962 and Who Killed Teddy Bear? Room without a view: Banksy teams up with Palestinian to open hotel in Bethlehem - CBC News - Latest Canada, World, Entertainment and Business News.

(Derek Stoffel/CBC) Imagine waking up, wrapped in luxurious linens, in the king-sized bed of a hotel's presidential suite — to be greeted by a view of a hulking concrete wall just outside the window. 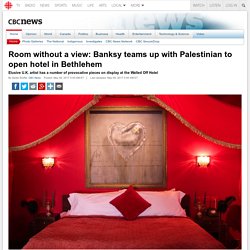 That's what some travellers are paying hundreds of dollars to experience at a new hotel featuring the work of the mysterious British street artist Banksy in the West Bank city of Bethlehem. The Walled Off Hotel is perhaps the only inn around the world that markets its bad view as its chief selling point. Hans Christian Andersen: The Dryad. By E are travelling to Paris to the Exhibition. 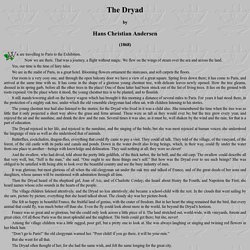 Now we are there. That was a journey, a flight without magic. We flew on the wings of steam over the sea and across the land. Harlan ellison i hav no mouth and i must scream. UVic Archives. Here's What Happens When You Edit Photos Like Music - Creators. What's known is that all digital files are made up of raw data: open any image, sound, application, or otherwise in a program like TextEdit, and you'll see the Unicode alphabet representation of your chosen file. 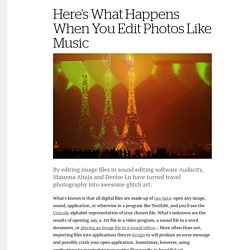 What's unknown are the results of opening, say, a .txt file in a video program, a sound file in a word document, or playing an image file in a sound editor... More often than not, importing files into applications they're foreign to will produce an error message and possibly crash your open application. Sometimes, however, using applications to manipulate non-native files results in beautiful art. Get Out Movie Art Gallery. Blumhouse Productions and QC Entertainment have today revealed an art series inspired by the upcoming Get Out movie. 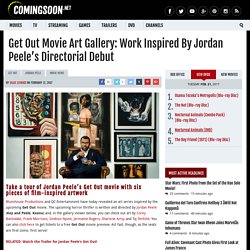 The upcoming horror thriller is written and directed by Jordan Peele (Key and Peele, Keanu) and, in the gallery viewer below, you can check out art by Corey Barksdale, Frank Morrison, Sindisio Nyoni, Jermaine Rogers, Sharlene Artsy and Taj Tenfold. You can also click here to get tickets to a free Get Out movie preview. Act fast, though, as the seats are first come, first serve! 'Firefall' at Yosemite Park thrills visitors. The natural effect gives the illusion that bright orange lava is flowing off the cliff at the park in California. 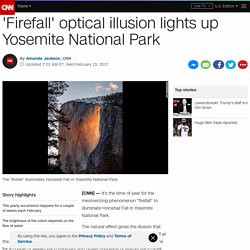 This magic trick is a natural occurrence that only happens for a couple of weeks each February and draws hundreds of visitors each night. The "firefall" comes to life when the angle of the setting sun causes light to hit the waterfall just right; making for some amazing Instagram-worthy photos. "The waterfall is bigger than it has been in a long time due to all the rain and snow we have received," said National Park Service spokesman Scott Gediman. "It has gained popularity the last few years due to social media," he said. "People come from all over the world to see this. " Looking to test out your photography skills? Moms Mabley - Wikipedia. Loretta Mary Aiken (March 19, 1894 – May 23, 1975), known by her stage name Jackie "Moms" Mabley, was an American standup comedian. 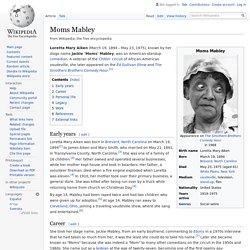 A veteran of the Chitlin' circuit of African-American vaudeville, she later appeared on the Ed Sullivan Show and The Smothers Brothers Comedy Hour.[1] Early years[edit] Loretta Mary Aiken was born in Brevard, North Carolina on March 19, 1894[2] to James Aiken and Mary Smith, who married on May 21, 1891, in Transylvania County, North Carolina.[3] She was one of a family of 16 children.[4] Her father owned and operated several businesses, while her mother kept house and took in boarders.

Her father, a volunteer fireman, died when a fire engine exploded when Loretta was eleven.[4] In 1910, her mother took over their primary business, a general store. This photography school in Lagos' floating slum Makoko is empowering kids to change their community. Sal Mineo: Muses, Cinematic Men. Old-Time Strongmen and the History of Bodybuilding. Whenever you pick up a weight, remember that you are following in the footsteps of giants and taking part in a ‘physical culture’ with thousands of years of heritage. 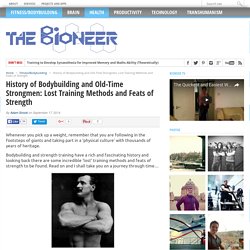 Bodybuilding and strength training have a rich and fascinating history and looking back there are some incredible ‘lost’ training methods and feats of strength to be found. Read on and I shall take you on a journey through time… The Early Beginnings The roots of bodybuilding and strength training can probably be traced back to Ancient Greece. It is here that we find the first ‘gymnasiums’ – meaning ‘naked place’ (and yet my gym get all aerated when I take my top off…). Bruce Gilden (@bruce_gilden) Walter Chandoha: The godfather of cat photography. A photographer born in New Jersey in 1920, Chandoha didn't get mixed up in the wrong crowd. The gang in question was of a feline persuasion, and their owner made them the subject of one of his most famous photographs, "The Mob," from 1963. It's one of over 200,000 stock images Chandoha has taken in a career stretching back to his days as a student at New York University. Since then he's amassed 34 books, over 300 magazine covers, thousands of adverts and become the preeminent cat photographer in America.

Chandoha was taking cute cat photos decades before cute cat photos became the internet's bread and butter. There was a time when "cats were used to illustrate just about everything," says the photographer. His home turf was pet food. It all started with Loco. Mick Rock: 'People call me the man who shot the '70s.' Mick Rock isn't so sure of that label. It ignores his more recent work, whether that be with Pharrell or The Black Keys. It's been a long journey for the veteran music photographer, one that started with a trip in England in the mid '60s. "I was studying modern languages and literature at Cambridge University in England in the late '60s, and I took an acid trip," Rock recalls. Tuesday weld. Joan Chen Pictures. Joan Staley, 1958. Yayoi Kusama’s Mesmerizing Infinity Rooms Embark on a North American Tour. When the Broad museum opened its doors last year in downtown Los Angeles, aesthetes from across the globe flocked to the contemporary art mecca to see a remarkable collection of more than 2,000 art pieces.

Though seeing works from artistic greats such as Andy Warhol, Ed Ruscha, and Robert Therrien is more than worth a trip to the avant-garde museum, the attraction that continues to draw the most attention is Infinity Mirrored Room—The Souls of Millions of Light Years Away. The bomb. Simon Menner - Images from the Secret Stasi Archives. Images from the Secret Stasi Archives or: what does Big Brother see, while he is watching? On Images from the Secret Stasi Archives Simon Menner has always been fascinated by pictures that can be decoded in a variety of ways, yielding entirely different results. One picture seems to show us a simple tangible object, and yet the object is changed fundamentally and continuously by what the viewer knows about it and what the viewer expects to see. On a personal level this might not have such a decisive influence.

But perception is not limited to the personal level; it also plays a decisive role in surveillance. The 70th Anniversary of the Summer of The Bomb. July 16. World, 500-1000 A.D. Ancient mosaic in Turkey shows skeleton drinking wine with message 'be cheerful' Emily Carroll Art & Comics. Consumers for christ by Swoboda on DeviantArt. Barbaric bunnies battle it out in medieval manuscripts. Meet the hip hop grandpas of Nairobi. This ultimate band of "true hip hop heads" allegedly double as security guards by night in Kariobangi - one of Nairobi's informal settlements.

10 stunning underwater vintage photos. Eijin Suzuki. The knitting clock. Wartime photos transformed into ghostly fantasies. Poster politics: The art of persuasion. The best ones that promote a candidate inspire hope and optimism. The best ones that oppose a candidate use humor or satire to critique the candidate for what they've done, or for what they promise or threaten to do. If you can laugh at someone, you can challenge them, and posters remain one of the most effective and powerful tools for holding political leaders accountable. Amelia Earhart died as a castaway, not on air. Throwback photos of experimental LSD parties.

In his pool were a bunch of "heads," acid grins on their faces, tripping out of their skulls. The Merry Pranksters, author Ken Kesey's notorious troupe of counter-cultural jesters, had decided to pay the photographer an unsolicited visit. "I don't think I stripped naked," Schiller, now 80, recalls, "but I jumped right in with them, I can tell you that! " Syd Mead. Simon Stålenhag Art Gallery. 19 precious monuments destroyed by war. Battle for Mosul: How ISIS is fighting back. But for all its gains -- 78 villages liberated, and nearly 800 ISIS fighters killed as of Monday morning -- the coalition is encountering fierce resistance from ISIS, in what is anticipated to be the terror group's last stand in Iraq. Massively outnumbered by the advancing coalition -- a 90,000-strong force of Iraqi government troops, Kurdish Peshmerga fighters and irregular militia soldiers -- ISIS relies on asymmetric warfare tactics to inflict damage on its opponents, and terrorize long-suffering local civilians.

In pictures: National Portrait Gallery exhibition of the coolest Americans. 20 Years of Mind-Bending Art From Omni, the Best Sci-Fi Mag of Our Time. 60 Adorable Real Vintage Wedding Photos From The '60s. Pretty Power Plants. May 28, 2004 Highway 12 Supercell-ne Nebraska. The Diabolical Diagram of Movie Monsters. 30 Awesome Behind-The-Scenes Photos From The Sets Of Classic Movies. Look at Me: Archives. Passport Photos of Iconic Figures in The Past. Data. Believe it or not, these aren't miniatures - a gallery on Flickr.