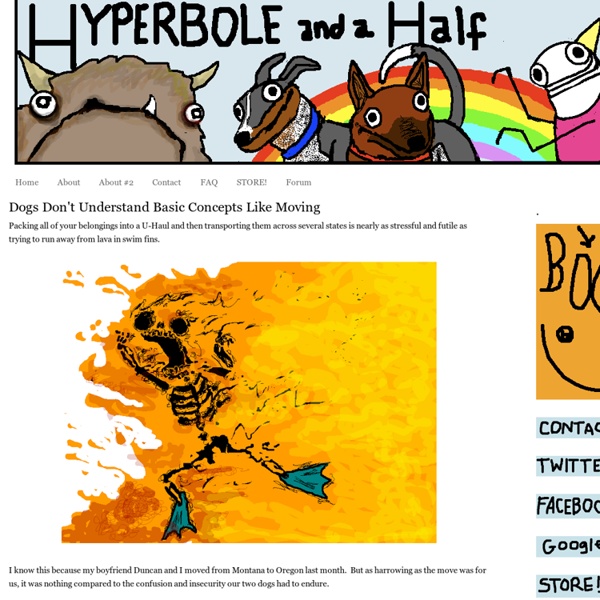 Packing all of your belongings into a U-Haul and then transporting them across several states is nearly as stressful and futile as trying to run away from lava in swim fins. I know this because my boyfriend Duncan and I moved from Montana to Oregon last month. But as harrowing as the move was for us, it was nothing compared to the confusion and insecurity our two dogs had to endure. Our first dog is - to put it delicately - simple-minded. Our other dog is a neurotic German shepherd mix with agonizingly low self-esteem who has taken on the role of "helper dog" for our simple dog. Neither dog is well-equipped with coping mechanisms of any kind. When we started packing, the helper dog knew immediately that something was going on. When the soul-penetrating pathos she was beaming at me failed to prevent me from continuing to put things in boxes, the helper dog became increasingly alarmed. Unfortunately for the helper dog, it took us nearly a week to get everything packed up.

Cretive Design Art Photos and Artworks American designer Justin Barber presented a series of papers Truth and Lies , in which he tried to develop a theme presenting the lies we tell ourselves and others. On posters written phrase, we usually say out loud, and in brackets says that we actually have in mind. Creative Graphic design artist used there is simple and stylish. What Your American Girl Doll Says About the Rest of Your Life Samantha Parkington:Did you know, when you picked her out, that Samantha was the cool one? Or were you simply drawn to her glossy brown hair, sophisticated accessories (she had a fur muff!) and rich demographic? Either way, every girl wanted a Samantha. If you owned her, you quickly learned the value of cachet. By virtue of acquiring a status symbol early on (a Samantha doll was the designer jeans of third grade), you never quite had to worry about things the way other girls did.

How a Fish Almost Destroyed My Childhood When I was seven, my family moved from suburban California to rural Idaho. In an effort to embrace Northern Idaho culture, my dad took me fishing at a lake near our house. I was really excited. Mostly because I thought that I would get to keep the fish I caught as a pet. 80 Funny Signs - StumbleUpon ← Previous Post Next Post → 80 Funny Signs jon February 19, 2011 8

Menace Power is intoxicating. Everyone loves having the ability to make their decisions into reality — to think "this should be something that happens," and then actually be able to make that thing happen. It is also dangerous. Husband banned from Target - StumbleUpon Husband banned from Target After I retired, my wife insisted that I accompany her on her trips to Target. Unfortunately, like most men, I found shopping boring and preferred to get in and get out. Equally unfortunate, my wife is like most women - she loves to browse. Yesterday my dear wife received the following letter from our local Target. Hyperbole and a Half Dear blank, please blank Wenn man nicht aufpasst, kann es passieren, dass man ohne es zu merken gleich mehrere Stunden auf der “Dear blank, please blank” Homepage verbringt. Wenn ich nicht so vorsichtig wär, würde ich wahrscheinlich jetzt noch dasitzen und eine lustige Kurznachricht nach der anderen lesen. Wer von euch ausreichend Zeit hat, sollte sich die Seite nicht entgehen lassen.

This is a good example of non-fiction because it presents a true story in a fun and interesting way. This exceeded my expectations on nonfiction because I often think on nonfiction as dull and boring, and this was entertaining and cute. It entails the trials of two dog owners who are bringing their dogs to their new home. The author also tries to get inside the heads of each dog, the simple minded one and the smarter one, as she tells the story. by lilyp_sstories Apr 10